Joseph O’Brien makes last Punch’ of the year a winner 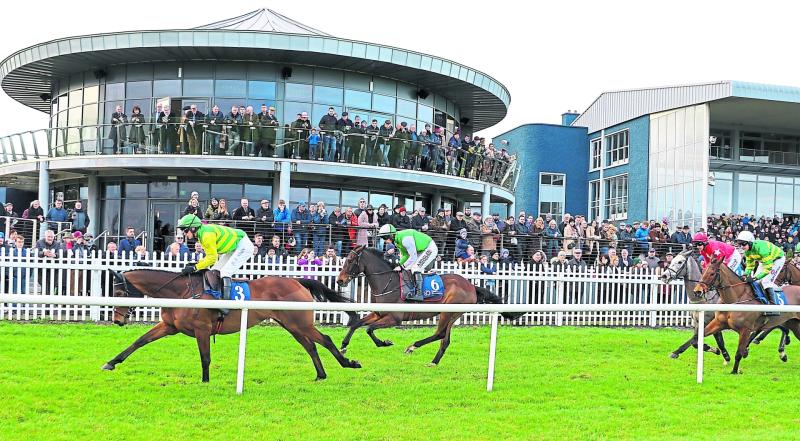 Joseph O’Brien rounded off another remarkable year with a winner at the final meeting of 2019 at Punchestown.

He landed the opening beginners’ chase with the JJ Slevin-ridden Smoking Gun, the well-backed 7/2 shot readily getting the better of his own stable companion Early Doors, the 9/4 favourite, by four lengths.

Willie Mullins sent out two winners at the meeting as Salsaretta, ridden by Paul Townend and the Rachael Blackmore-ridden Burrows Saint each recorded three and a quarter length victories.

Salsaretta, the 8/11 favourite, beat the Mags Mullins-trained Agusta Gold to take the mares’ chase in good style while Irish Grand National winner Burrows Saint led home a 1-2-3-4 for the stable when making all the running in the conditions’ hurdle, the 13/2 chance winning from the gambled-on 13/8 favourite Saglawy.

Al Boum Photo could head straight to the Cheltenham Gold Cup after his repeat success in the Grade 3 Savills New Year’s Day Chase at Tramore on Wednesday.

Sent off the 4/7 favourite under Paul Townend, his supporters never had a moment’s worry as he cruised to a six-length success over his own stable companion Acapella Bourgeois.

“He jumped well, and Paul was positive on him,” said Mullins. “He got a good blow into him and I couldn’t be happier the way the day worked out.

“I’m leaning towards going straight to the Gold Cup with him from here again,” the trainer added. “When a plan works, we might leave it at that. I’ll have a word with Mr and Mrs Donnelly and see what they want to do.”

Mullins and Townend had earlier won the first race of the New Year in Ireland as 5/2 shot Saint Roi easily landed the opening maiden hurdle. Eoin Doyle won the 2m5f handicap hurdle with Macho Mover which was ridden by Ryan Treacy.

The 8/1 shot looked to have plenty in hand as he accounted for 11/4 chance Duhallow Paddy by two and three-parts of a length.

Joseph O’Brien began the New Year as he ended the old with success in the opening race at Fairyhouse on New Year’s Day.

Home By The Lee did the business for the young maestro and JJ Slevin in the 2m4f maiden hurdle, the well-backed 3/1 shot winning well from the Willie Mullins-trained Aione for owner/breeder Sean O’Driscoll.

The 6/4 second favourite won by 11 lengths from the Charles O’Brien-trained Strange Notions.

The winning jockey made it two on the day as the Dermot McLoughlin-trained Lee Valley Legacy took the 3m handicap hurdle. The 12/1 chance scored by half a length from Askann.

The champion trainer also doubled up as he won the 2m5f beginners’ chase with the Mikey Fogarty-ridden Castlebawn West. The 2/1 chance ran out a seven and a half-length winner from Forza Milan.

Graignamanagh apprentice Danny Sheehy landed a surprise 33/1 winner at Dundalk on Friday where he won the opening 5f handicap on the Anthony McCann-trained Red Cymbal.

Owned by Rita Shah, the outsider was never far off the pace and comfortably accounted for the Michael Halford-trained Arcanears.

Dunnamaggin-based Ray Cody won the big race of the night when the Ballygallon Stud-owned Guinevere took the 12f handicap.

The 16/1 shot, the joint outsider of the field, got to the front under Conor Hoban deep inside the final furlong to win by a length from Miss Snossyboots.

“Now that she has got her head in front she might win again,” said Cody.

“She will probably come back here in three weeks for a rated race over a mile and a half. Down the line she will go back over hurdles.”

Joseph O’Brien was back among the winners at Cork on Saturday where 5/1 chance Deilginis landed the beginners’ chase in the hands of JJ Slevin.

Owned by Martin O’Sullivan, the six-year-old led after the second last fence and raced away from Shakeytry to score by three and three parts of a length.

On a busy day at Naas on Sunday, Envoi Allen was the star of the show as Gordon Elliott’s star novice hurdler stayed unbeaten in the Grade 1 Lawlor’s Of Naas Novice Hurdle.

The red hot 1/4 favourite took his tally to seven wins from as many outings on his first try at two and a half miles.

The Davy Russell-ridden gelding was given a good test by the front running Elixir D’ainay but from before the last there was only going to be one winner as the favourite pulled away to score by three and a half lengths.

Afterwards Gordon Elliott reported that his third winner of this race in the last four years would get entries at next month’s Dublin Racing Festival at Leopardstown but that he may head straight to Cheltenham where his target has yet to be decided.

Although he had to settle for second in Lawlor’s Of Naas Novice Hurdle, Willie Mullins did end the day with a double which began when Cash Back, ridden by his nephew Danny, made all the running for an impressive success in the two mile novice chase. The Irish Arkle at the upcoming Dublin Racing Festival could be next.

The champion trainer also sent out Asterion Forlonge to win the maiden hurdle in good style under Paul Townend.