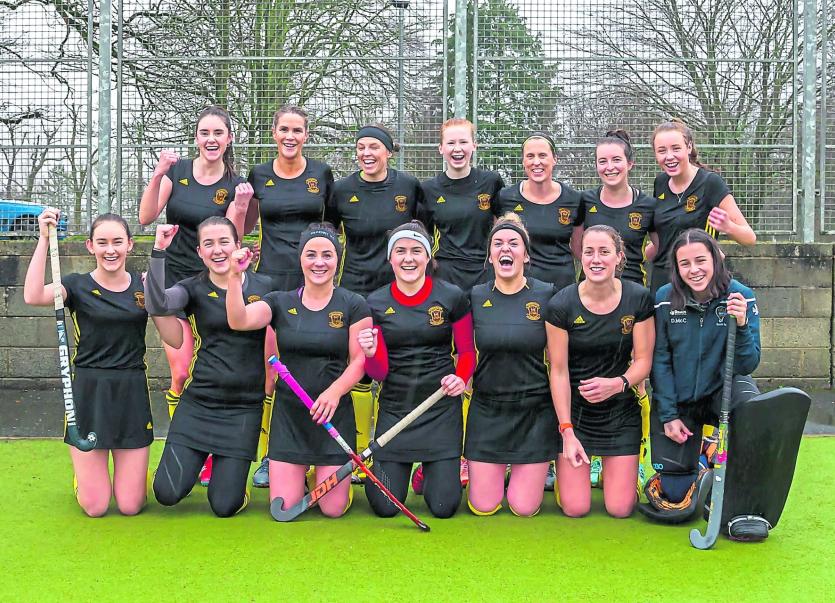 It was business as usual for the Kilkenny ladies first team as they resumed their season in typical winning ways.

The squad made light of the miserable conditions as they opened the second half of their season with a big win at home to Skerries.

The game started well for the Cats, who dominated the opening stages. Clever play from Aisling McGrath earned Kilkenny the first short corner of the match, but the Skerries goalkeeper pulled off a fantastic save to deny Sinead Connery the opening goal.

The disappointment was only temporary; Linda Caulfield opened the scoring from play for Kilkenny, followed by a great goal from a short corner by Caitriona Carey.

Skerries then broke to advance on the Kilkenny goal, but netminder Doireann McGurdy advanced quickly to clear her lines.

Niamh Spratt secured the ball for Kilkenny and transferred it nicely across the pitch to Lainey Gilsenan who created an attack down the right wing.

Following some great work by Caitriona Carey in the opposition circle the ball fell to Ally Carter, who struck it from the top with Linda Caulfield on hand to touch the ball past the ’keeper. The fantastic work-rate was the tale of the half, which ended with Kilkenny 3-0 in front.

The second half started brightly for Kilkenny with some lovely one-two passes between Caitriona Carey and Gemma O’Dwyer.

Carey passed the ball out to Hannah Kelly on the right wing who attacked the circle and sweetly struck it past the ’keeper.

Some great defensive play by Rachel Kelly and Ciara Clarke down the right wing, coupled with fantastic forward movements, saw the ball fall to Ally Carter who slotted it through for Ava Murphy to deflect it past the keeper on her reverse.

The roles were reversed a few moments later with Aisling McGrath turning the ball over in midfield and laying it off to Murphy who set Carter up to sweep home.

After a number of short corners in the second half, a switch left to Rachel Kelly saw her power past the goalkeeper to hit the backboard.

Abby Gilsenan’s presence in the centre of the pitch prevented Skerries from breaking through on numerous occasions.

With the help of Niamh Spratt and Ciara Clarke in defence, goalkeeper Doireann McGurdy kept a clean sheet.

The intensity and work rate continued into the fourth quarter, when Sinead Connery got on a loose ball on the right hand side of the circle.

Despite valiant efforts of the Skerries defence she managed to get her shot away and bury the ball into the back of the net.

Kilkenny continued to attack in droves and some great interlinking play from Lainey Gilsenan and Paula Farrell ended with Farrell slipping the ball through to Gemma O’Dwyer, who was unlucky to hit the post.

Shortly after Farrell found herself on the end of a ball through from Abby Gilsenan and touched it past the keeper.

While this was the last goal Kilkenny continued to set the tempo with some great transfers in the defensive line and fantastic forward and midfield rotation, creating numerous options for the player on the ball.

It was a great result and start to their second half league campaign for the team who face into a double weekend next week with both a cup and league fixtures.