Success in Scotland and glory in Gowran for Kilkenny athletes 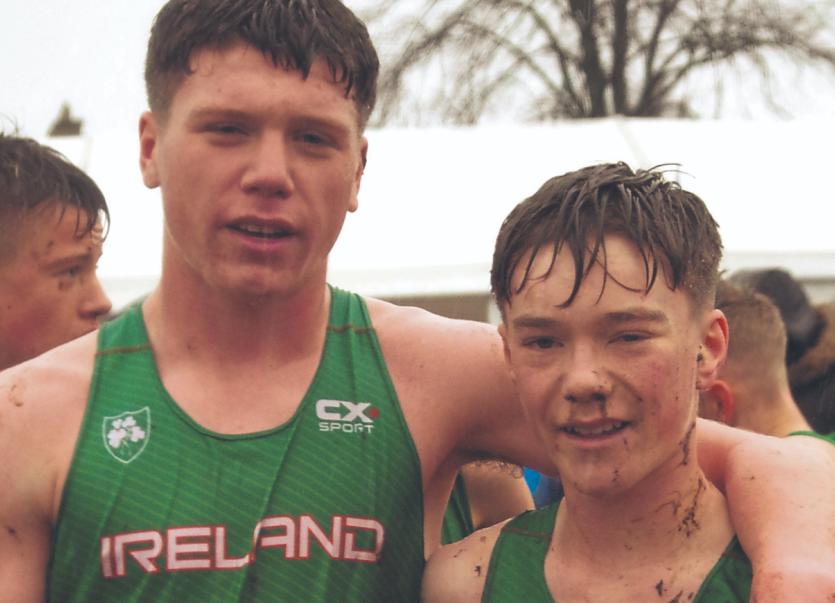 There were two major events on the athletics scene at the weekend, with Kilkenny athletes involved in both.

In Scotland David Williams and Tadgh Connolly were part of the Irish team that competed in the Celtic International.

The venue was a lot more familiar for other athletes as Gowran hosted the Leinster Intermediate, Masters and Juvenile cross-country relays.

While Scotland boasted rain and more rain, Gowran was bathed in welcoming sunshine.

Celtic International
Stirling was the venue for this year’s Celtic International. In former years battles at nearby Brannock Burns, The Bridge of Allen and Stirling itself were fought between the Scots and English - last weekend it was the turn of the Irish to battle for cross-country honours with the Scots, Welsh and Northern Irish.
Three races were incorporated into one: the Celtic International, the final leg of the British cross-country challenge and the Scottish Inter district championships. There was success for Kilkenny athletes as Ireland were third in the under-17 event, bringing team medals back to the county.
Set in Kings Park, where Stirling Castle towered over a fantastic cross-country location, David Williams (St Senan’s) and Tadgh Connolly (St Senan’s) took their places at the start line for Ireland.
This was Connolly’s second international, having competed in the Celtics in Belfast last year. Stirling saw Williams make his international debut. Both athletes were selected on the strength of their performances at All-Ireland cross-country championships.
The selection strengthened Kilkenny’s reputation for athletes competing in the Celtic International. Last year six athletes were selected from five different clubs.
Competing in the under-17 event David was two years younger than most of the competitors, while Tadgh was one year younger. The difference is age accounted for the difference in age classifications in Ireland and the UK, where they run juvenile events for under-11, 13, 15 and 17 age groups.
There were 81 starters in the race, which was three races in one. Scotland, unlike other countries, has adopted the policy of equal distances for male and female athletes so the athletes faced the challenge of racing over distances much longer than they are used to. Thus Tadgh and David moved up by 2km to race the 6km distance – a challenge in itself.
With the underfoot conditions the muckiest and wettest seen in decades, coupled with persistent heavy rain which fell all day and the day before, navigating the course itself was always going to be the biggest challenge of all.
The Irish girls’ under-17 team did well with Emma Landers of Youghal taking second in the overall British Cross Challenge and first of the Celtic race. Ireland finished third.
The boys had a lot to live up to as they took on two 3km laps on a course filled with tough underfoot conditions, tight bends and challenging hills.
Tadgh Connolly went out hard and led the Irish challenge for the first 1km before being caught by Belfast’s Jake Stafford and Joel Chambers.
Up front however it was Jenson Connell from Mansfield AC in England who was forging ahead, navigating the terrain without any difficulty. David Williams started conservatively, preferring to settle into a good rhythm for this much longer distance before using his natural speed to push further up the field.
With 2km completed it was Jack McCausland of Lisburn who was the Irish athlete of note as he worked his way to become the leading Irishman. It was a position he retained to the end.
Tadgh Connolly was now racing alongside three other Irish competitors with David Williams not too far behind with Myles Hewlett of Wexford and Jack Fenlon of Laois. At the multiple bends with almost 3km completed there were lots of slipping and sliding - Archie Lowe of Middlesbrough had mounted a challenge on the lead but was knocked back with not just one slide in the mud but three, helping Connell to gain further momentum and extend his lead.
Behind the front two Jack Patton of Scotland was leading a group of eight athletes in third place. Tadgh Connolly was holding steady 20m behind and David Williams was moving nicely through the field.
Often the muddy conditions suit one athlete more than another, for Connolly who is tall and powerful, it was probably not his ideal course whereas Williams, who is slight and smaller, glided over the terrain.
At the end of the race Tadgh Connolly was 12th home in the Celtic International, one second ahead of fast finishing David Williams in 13th place.
St Senan’s AC also brought five of their 14 and 15 year olds over for the experience. They all raced in the under-15 event. Caoimhe Phelan was very impressive as she endured the tough competition to finish 16th, still being eligible for this race next year.
Always a tough competitor she thrived on the challenge of completing her first 4km race and navigating the difficult course. Club mate Molly Long was 61st.
In the boys’ under-15 race Gearoid Long will have gained very good experience and motivation from the 4km event as he finished 47th. Ben Wallis had a great race in 61st place while Naoise Gilmartin finished 68th.

Leinster
At senior level it is a challenge to beat Dublin in an inter-county competition. Having more clubs and a higher participation in athletics in general gives the capital a considerable advantage.
However, with the home advantage going to Kilkenny on Sunday, Gowran provided a victory ground for the county’s intermediate team.
Initially, it looked like Westmeath might be challenging for the county title as they had three athletes up front with one not too far adrift.
As Padraig Moran and Andrew Nevin ploughed through the rather sticky course Conor Rochford (St Senan’s) and James Kelly (Castlecomer) were not giving up on the chase. They stuck with the two Westmeath boys as they made every move to surge ahead. Dean Rowe (Gowran) and Luke Morgan (St Senan’s) were right behind them along with Westmeath’s James Keegan.
The Kilkenny boys were aware of a bunch of Dublin men running together with the leading pack. Collum Costello of Brothers Pearse and Robert Frewen were neck and neck with them. Also just a short distance behind was Ian O’Reilly (Brother Pearse) and Brian Sexton, Joe McCracken and Brian McKenna (all Raheny) who were having their own battles with Jonathan Crowley (St Senan’s). Just behind them were two more Dublin men with Johan Muller (Gowran).
At halfway Westmeath still had Moran, Nevin and Keegan in the leading group but their other three athletes had dropped back as far as the 30s. This now left Dublin with a slight lead in the team category over Kilkenny.
The Kilkenny supporters were wild with excitement having precisely calculated the team standings. Jonathan Crowley was fading – he had to stay up with the Raheny lads. Johan Muller had to gain three more places while Conor Rochford and James Kelly had to keep chasing the two Mullingar athletes who, by now, had started to make a break from the main group. Dean Rowe and Luke Morgan needed to work together and keep ahead of Ian O’Reilly and Brian Sexton.
As the athletes made their way into the second field both James Kelly and Conor Rochford, James Keegan and Matthew Molloy of Tullamore led the chasing group. Kelly moved a little ahead and was chasing down the leaders. Conor Rochford maintained control and looked composed in the chasing group.
There were individual battles between Kilkenny and Dublin right through the entire field. Every Kilkenny athlete was giving it their all.
With one kilometre to go James Kelly was comfortably third and Conor Rochford was now paying heed to the excited tones of Bill Lacey’s voice. He ran slightly ahead of the group as he rounded the final corner of the inside field to be in fourth position and led three Dublin men as he sprinted for home with the Castle in the background.
Dean Rowe was by now a comfortable ninth with Luke Morgan (St Senan’s), having warded off the challenge of Ian O’Reilly and Brian Sexton, sprinting home a comfortable 13th.
The real battle was with Jonathan Crowley, who was surrounded by Dubliners. By now James Kelly, Conor Rochford and Dean Rowe had ran back to encourage all the Kilkenny athletes to pass every Dublin athlete they could.
To the voice of James Kelly, Crowley passed three Dublin athletes to finish 16th. Johan Muller (Gowran) was 23rd. The Kilkenny boys knew the score - victory was theirs. St Senan’s were fifth club, Gowran sixth and Thomastown ninth on a great day for Kilkenny athletics.

Silver for women
The women’s race, by contrast, was missing some key Kilkenny athletes. However, other counties were in the same predicament, making the county team race an interesting event.
Once again the Kilkenny ladies had to contend with a Dublin challenge. Niamh Corbett of Raheny Shamrocks had run alongside Emily Grennan (Tullamore) and the McDonald sisters, Breda and Kate, for much of the race. Corbett and Grennan battled it out for the individual gold for the last 1km with Corbett drawing ahead as they came through the gap into the final sprint.
Kilkenny’s first athlete home was Katie O’Brien (Gowran) who had a brilliant race to finish fifth, just one place ahead of Aine Kinsella (St Senan’s) in sixth.
With Catriona Corr (Gowran) running a stormer in eighth place the county quartet was completed by Donna Dunne (KCH) who finished 13th.
In a cruel finish Dublin pipped Kilkenny to gold by just one point. There was however some consolation in the club stakes as Gowran finished second and KCH were third.