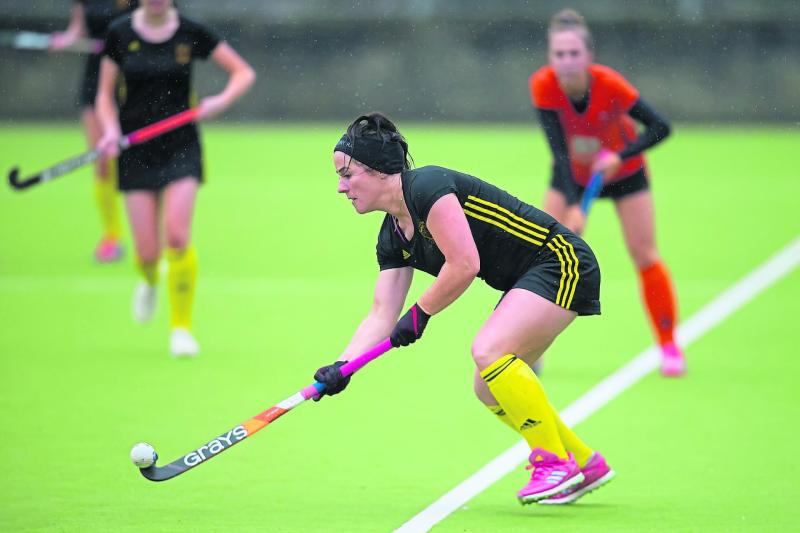 Sinead Connery got the first team rolling with the opening goal

Freezing weather conditions put the Kilkenny ladies first team’s season on ice, but they proved too hot to handle when they got back into action at the weekend.

The Cats chalked up another impressive win when beating the Dublin North Firsts in their Irish Trophy match on Saturday.

Kilkenny were strong favourites for this match, but didn’t convert any of their first quarter chances. Despite this they used their experience, trusting their strategy and tactics.

The team remained composed through the second quarter and got their reward with the opening goal from Sinead Connery, who showed her level of skill to deceive the Dublin North ’keeper with a superb finish into the bottom right hand corner.

The Kilkenny pressure continued before, following an excellent passage of play between Abbey Gilsenan and Aisling McGrath,

McGrath passed the ball into space for the speedy Ally Carter to run on to. She dropped the ball back to Laura Walshe, who didn’t hesitate to whip the ball past the goalkeeper.

The goal was a just reward for Walshe, who was nominated the Most Valuable Player by the coach and team and the end of the match due to her incredible work rate and her high level of tackling throughout the match.

The second half saw Dublin respond to Kilkenny’s repeated attacks. That led to a period of pressure where Kilkenny were forced to defend a series of short corners but they shone throughout with Sara Browne and Ciara Clarke making vital tackles, Lainey Gilsenan intercepting some very dangerous passes and the Kilkenny goalkeeper Jane Purcell making some crucial saves to ensure that the Kilkenny side kept a clean score sheet.

Having defended their lead and absorbed the pressure, Kilkenny Ladies stepped it up a gear again. Catriona Carey led the attack and, working her way up the pitch with the help of Ava Murphy, found Linda Caulfield on the far right post for the third goal.

The newfound momentum continued as Kilkenny charged on to win a short corner. Anna Riba delivered a precise ball to the top of the circle. It was switched to Linda Caulfield who finished with a clinical strike.

It was a bumper weekend for Kilkenny hockey as the Ladies Seconds team secured their place in the Division 11-13 Cup semi-final with a 6-1 win away to Naas on Saturday.

While it was a good win in the end, the game didn’t start as Kilkenny would have hoped. Confusion in the Kilkenny circle saw Naas awarded a short corner in the opening minutes of the game. Naas made no mistake and rocketed the ball into the back of the Kilkenny goal.

Sophia O’Shea refused to let Kilkenny heads drop. She backed herself from the restart and glided her way into the Naas circle. Her persistence paid off and Kilkenny were awarded their first short of the game.

Kilkenny failed to convert on this occasion, Naas sending the ball back deep into the Kilkenny half. An interception from midfielder Nessa Farrell saw a quick transfer to Avril Simpson, who ran the length of the field and was unlucky not to come off with a score.

This was the drive Kilkenny needed. Momentum was building up and a strong press resulted in a fantastic goal by the dogged O’Shea, who worked tirelessly throughout the first half.

Kilkenny continued to push on through the vocal guidance of goalkeeper Doireann McCurdy. Fantastic support play from Maggie Byrne and Eva O’Donnell, saw Hannah Lodge link up with Ruth Ferris for Kilkenny’s second goal of the day.

Ferris was unlucky not to get another score before the half time whistle sounded a one on one with the goalie saw a huge tackle on Ferris and the ball just trickled over the back line.

Naas continued to attack hard throughout the second half, but phenomenal play by Ellen Daly saw the ball guided effortlessly out of the danger zone time and time again. A fantastic passage of play between Alice McGarry and Kate Blanchfield saw Kilkenny awarded another short. Andrea Parr made no mistakes and got her name on the score sheet with an unstoppable shot on goal.

The goal of the match came when Niamh Moore latched on to a fantastic interception by Blanchfield and weaved around five Naas defenders before gliding the ball into the back of the goal.

Led by captain Louise Kenny, Kilkenny dominated throughout the final quarter and continued to apply the pressure on Naas resulting in another two goals by Ferris and O’Shea. Kilkenny await the results of Pembroke Wanderers and Botanic to see who will be their opponents in the semi-final on March 1.