Paddlers take on the world in South Africa 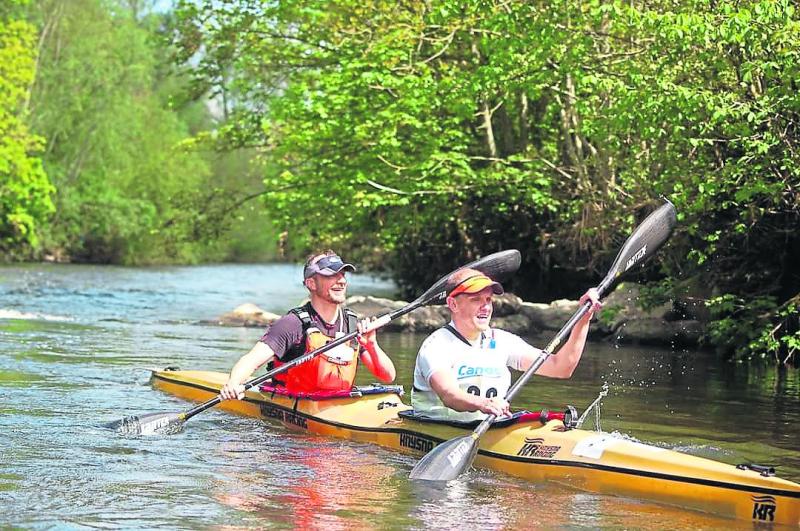 The Thomastown Paddlers pairing of Donnacha Brennan (right) and Tadgh de Barra are taking on the three-day Dusi river race in South Africa. The event features 120km of fast and challenging river

Two of Kilkenny’s most experienced kayakers will take on the best in the world in an international event this week.

Donnacha Brennan and Tadgh de Barra, members of the Thomastown Paddlers canoe club, have made the trip to South Africa in search of adventure. Their target is the three-day Dusi river race which runs from Pietermaritzburg to Durban in South Africa.

The race, which includes 120km of extremely fast and challenging river, features obstacles including weirs and long stretches of rapid water which present an extreme capsize risk, even to experienced paddlers.

As if that wasn’t enough, many of these sections are strewn with rocks, often with just one clear pathway through making collision damage almost inevitable. Get the incorrect racing line through these sections, your race will end in seconds.

However, all the challenges aren’t on the water. Many of the river sections are too dangerous to paddle, requiring the paddlers to get out and run alongside.

In other sections long river loops are circumvented by the paddlers running with their kayaks. The running sections add up to 18km over often variable terrain, where fast running times are essential to remain competitive.

For Tadgh and Donnacha, who are the only Irish paddlers competing this year, the winter training schedule has been intense and has included early morning paddling and running in three hour sessions.

Preparations have also involved much more than river racing and trail running. River racing lines have had to be studied and the whole logistics of the trip planned to perfection.

Both paddlers have an impressive pedigree, and are regular winners in the annual divisional race series. Both have a number of Liffey Descent medals in their collection and have represented their country in numerous international events in different kayak disciplines. But the Dusi presents a once-in-a lifetime challenge, as it is the world’s most famous kayak race.

It is an incredible honour for the small Thomastown club to have a two of its members competing in this race. And they are not just going to complete the race; in a field of 1,200 to 1,500 kayakers, they are targeting a top 100 finish.

It would be an incredible feat for the Thomastown club, which constantly punches above its weight at competitive racing events. This comes as no surprise as the dedication of a core group of club stalwarts continues to foster the sport with one or two new junior paddlers arriving on the racing scene each year.

The Dusi Race runs from tomorrow (Thursday) to Saturday. A live internet feed is available from the official Dusi race website (dusi.co.za). Watch out for the Thomastown duo, who have the race number 12144.