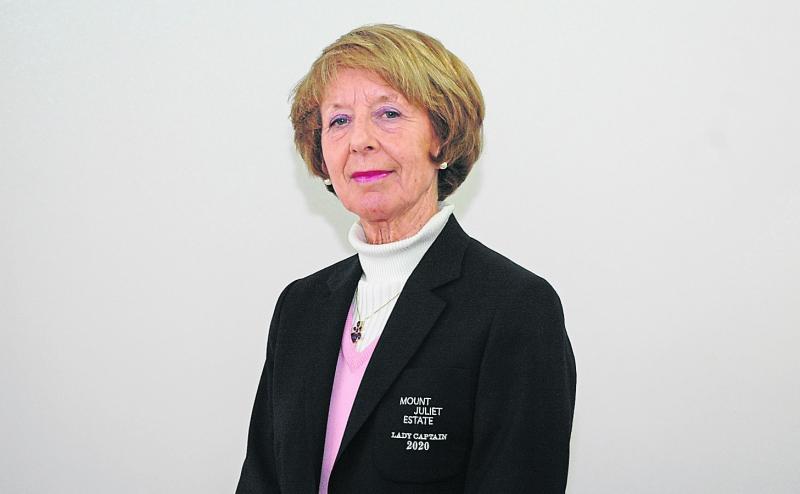 This is a special year to be the Lady Captain at Mount Juliet Estate golf club.

The Dubai Duty Free Irish Open is heading this way, to the majestic Mount Juliet course to be exact, and the staging of the high ranked European Tour event will stack extra responsibilities on everyone involved in the club.

We caught up with the current Lady Captain at Mount Juliet, Annette Hogan, and spoke to her about the exciting times ahead, her love of the game and so on.

Annette was appointed to the role of Captain in December 2019, and she drove into office officially on January 11, 2020.

She holds position for one year, and what a year it promises be.

Annette is a latecomer to golf. She only took up the game a little over 10 years ago.

“I took it up in the dead of the night and started to play on a beautiful links course, Dooks in Kerry, one summer before showing my game in Kilkenny,” Annette explained.

Gardening Passion
Annette used to think that golf was boring. Her passion was gardening, and she took great pride in it.

Indeed, she spent a number of years restoring a beautiful old garden in Bonnettstown House.

Then that summer in Kerry arrived. There was a new dawn.

She realised how enjoyable and fulfilling the social side of golf could be.

As she put it: “Spending four hours with people that share the same interest was a breathe of fresh air for me.”

Annette is Dublin born. She is married to Kilkenny solicitor, Michael Hogan.

They have three grown up children and she insisted golf has helped her carve out her own world since the children left home.

Annette’s background is interesting. After graduating from UCD she spent some time in West Africa as a volunteer teacher. That was at the tender age of 21.

She then joined Aer Lingus as an air hostess. After meeting her husband she moved to live in Kilkenny and reared her children here.

Annette joined Mount Juliet golf club in 2014, and she has never looked back.

Her claim to fame in golf is that she managed a team that reached an All-Ireland final.

She was offered the role of Vice-Captain not too long afterwards.

The team she managed did really well and won the Leinster Trophy.

“That was a huge success for our club considering the small number of lady members we have,” she reminded.

The number of female members is still small, and very small by comparison to the male membership of golf clubs throughout Ireland.”

When I asked Annette what Mount Juliet was doing to encourage more ladies to take up the game, she told me about the programme called ‘Ladies into Golf’.

This is a five week introductory programme to the game that includes lessons from Mount Juliet golf professional, Sean Cotter.
And just like that, Annette signed me up!

As one who never refuses a challenge, the timing was perfect as we all try and get into the swing of things ahead of the Irish Open.

Join Us
So for anyone else out there who would like to join us, the course starts on Thursday, March 26.

On top of recruiting new members, Annette, as Lady Captain, also has a list of other duties, including working with the current members to organise teams and appoint managers for club teams.

Among her biggest tasks is helping to drive on the Ladies Open competitions.

And into the mix this summer comes the extra responsibility the Irish Open in May brings. Here she will meet and greet all the top players and officials travelling for the event, working closely with club Captain Ger Dowling.

To finish, we decided to throw a few rapid-fire golf questions at the Mount Juliet Lady Captain:

Q - What was the most satisfying hole you have played?
A - An eagle in Dooks, the links course in Kerry. At Mount Juliet it was to birdie the 14th hole with a par three. What’s rare is wonderful!

Q - What was the best course you have played, outside Mount Juliet?
A - Tralee. The landscape is dramatic. It’s like playing on a liner with the Atlantic Ocean on your side.

Q - What course is on your bucket list to play?
A - Adare. I would like to play the new course before the Ryder Cup is held there in 2026.

Q - What major tournament would you like to attend?
A - I prefer to watch the big tournaments on television. However, I would like to go to the Ryder Cup.

Q - Who are you looking forward to meeting at the Dubai Duty Free Irish Open?
A - Shane Lowry.

Q - Why do you love the game of golf?
A - You are always competing against yourself and constantly trying to improve your game when you play a round of golf.
The social interaction is wonderful too.