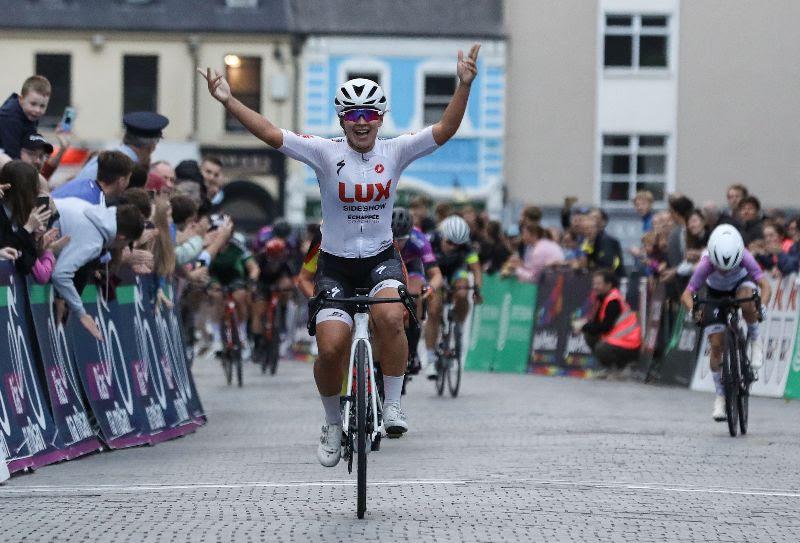 Makayla MacPherson was the queen of Kilkenny Castle as she sprinted home on The Parade to win the stage five city circuit race on Saturday evening.

MacPherson's  dominant sprint performance carried her several bike lengths clear of the rest of a 48-rider group which contested the penultimate stage of the race on a two kilometre circuit starting at the Marble City's most iconic landmark.

The 18-year-old from Corona California emulated the stage one success of her team mate Kaia Schmid as she led through the final corner at the end of a high octane hour of racing to power up the final 100m gentle rise to the line.

MacPherson had earlier take the first of two primes to signal her sprint ability and, after Switzerland's Lena Mettraux of Andy Schleck CP NVST Immo Loch had take the second mid race prize, the pace steadily rose towards the anticipated bunch finish.

The final lap of the race turned out to be the fastest and began with Alice Sharpe setting the pace as she looked to place her team-mate and Kilkenny woman Mia Griffin into prime position.

Griffin was briefly delayed on the run to the final turn and Sharpe was overtaken by others into the final bend with MacPherson timing her lunge to perfection as she powered through the final corner on the way to glory and the Just-Print.ie Stage Winners jersey.

Paulien Koster of the Jan Van Arckel squad in the Netherlands finished second with Léna Mettraux third. Kaia Schmid was a significant fourth which helped her to take over the lead of the Sport Ireland Points Classification while Lisanne Immerzeel (Team Noord Holland) was fifth ahead of the Team Ireland duo, Alice Sharpe and Mia Griffin.

Shackley's eighth place finish ensured that she retains her five-second lead over Abi Smith as well as the lead in the Women's Cycling Ireland Young Rider classification to go with the lead in the Wicklow 200 Queen of the Mountains competitions.

Linda Kelly (Cycling Munster) was safely in the main peloton and will carry a healthy 5m23s lead over team mate Becky Woods in the battle for the Kilkenny County Council Best Irish Rider competition.

The riders face an 88km final stage today. Starting at the Springhill Court Hotel the route winds its way back to Kilkenny Castle with the challenging climb of Woodstock near Inistioge along the way after which the winner of Rás na mBan 2021 will be known.