Ella Dunphy is President of the IPAV 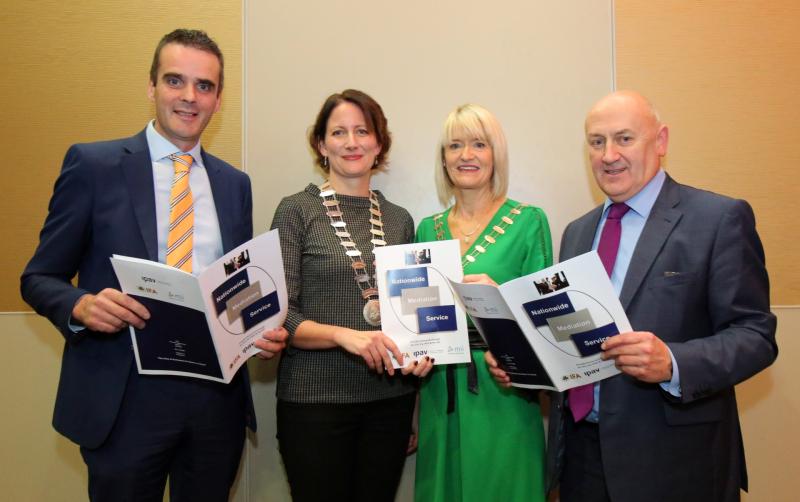 IPAV, the Institute of Professional Auctioneers & Valuers, has  launched, in partnership with the IFA (Irish Farmers’ Association) and the Mediators’ Institute of Ireland (MII), a new Nationwide Mediation Service designed to resolve farming and land disputes and disagreements.

Speaking at the launch of the service in conjunction with IFA President Joe Healy and Sabine Walsh, President of MII at the Midlands Park Hotel, Portlaoise, IPAV President, Ella Dunphy said in the farming sector, success hinges on stability in relationships, associations and contracts.

“Whether it’s ownership of land going back several decades, to modern share farming agreements, disagreements can arise that can be personally, professionally, financially, legally and socially very damaging,” she said.

“However, any agreement or contract has the potential to cause disagreement, and agricultural land agreements are no exception.”

She said the IFA master lease which IPAV members will now recommend to all members is an excellent land leasing document designed for the efficient and effective resolution of disputes.  Parties can immediately identify a route to resolving a problem.

“However, while some issues are easily resolved, many disputes cannot be easily straightened out and require the assistance of a third party. Traditionally this was dealt with through the legal route involving solicitors and the courts, but the role of mediation is increasingly becoming more common – and for good reason,” she said.

Ms Dunphy said it is arguable that mediation is well suited to most disputes because it gives parties more control over the outcome of a dispute, “as well as being much faster and less costly than going to court.”

She said the partnership between IPAV, the IFA and the MII launched today was developed over the last three years.

IPAV’s Chief Executive Pat Davitt said his institution was delighted to endorse a Mediation Service in conjunction with the IFA and the MII. which can be activated by IFA members in the event of a dispute.

“The service can be activated in a variety of ways - through an IPAV Member, online by accessing MII members directly, or through referrals from solicitors, accountants or agri-consultants,” he said.

IPAV members will conduct a free open market rental valuation to IFA members who wish to rent theirlands and an MII selected member's initial, and if required second mediation consultation, will attract a 50pc discount to IPAV & IFA members.