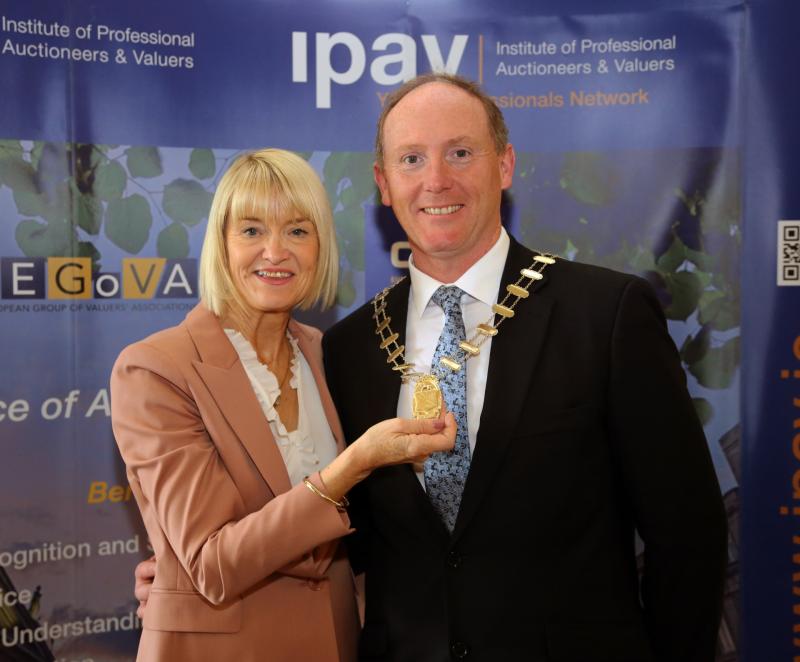 Ella Dunphy outgoing President of IPAV, the Institute of Professional Auctioneers & Valuers hands over the chain of office to incoming President, David McDonnell

Kilkenny's Ella Dunphy, outgoing President of IPAV, the Institute of Professional Auctioneers & Valuers hands over the chain of office to incoming President, David McDonnell at the organisation’s annual conference in Mullingar at the weekend (15th June).

Mr McDonnell said Ella had done a “truly wonderful as President.  As our first – and most certainly not our last - female President, Ella blazed a trail that will be hard for me to follow.  I wish to thank Ella for all her hard work during the past year and to wish her, her husband Pat, and their family the best for the future,” he said.

The current housing strategy is failing the current generation and we are in danger of creating a welfare state,  Michael O’Flynn, Chairman and CEO of the O’Flynn Group told the annual conference of IPAV, the Institute of Professional Auctioneers & Valuers, at the weekend.

He said we need to ask ourselves whether home ownership is an obsession or simply “a sensible economic and social decision everyone should have a right to make.”

Policies must support the development of an appropriate number of buy-to-rent units. “However, promoting the idea that 50pc or more of homes should be rented is irresponsible when no assessment whatever has been undertaken as to how this can fit with Ireland’s economic and pension policies or the mind-set of people,” he said.

“Before prioritising build to rent we need to consider if this is what people want and will be able to afford in the long term or is it just that the vocal few, comfortably living in homes they own themselves, believe that long-term rental should be good enough for others.”

“We are also creating a social housing-dependent society.  We are replacing one macroprudential risk with a far greater one.”

“Over-correcting one problem is having this serious unanticipated consequence.”

He also said “we are recklessly pushing the traditional smaller landlord out of the market.”  Taxation and regulation has resulted in 8,000 traditional landlords exiting the market in the last 12 months, he said.

“Tenant protections introduced to deal with a minority of rogue landlords have created a class of rogue tenant who can cause serious financial difficulty for the smaller landlord.”

He also called for more social housing saying Government had abdicated responsibility for the provision of housing for those who cannot afford to buy or to pay market rent.

On the green agenda he said the National Planning Framework will remain aspirational unless backed by tax incentives and infrastructure investment.

He said the current model of zoning land is “simply driving up the cost of land without any public benefit.” He said the use of strategic land reserves would be “a game changer for housing delivery.”

And he said the answer to the supply of affordable units is to “ensure their delivery is viable without unsustainable profit.  The answer to that is to implement land use policies and fiscal policies to support viability and, in return, requiring delivery at affordable prices as the quid pro quo for that support.”

Incoming President of IPAV, David McDonnell, called for the transfer of responsibility for conveyancing from the Department of Justice to the Property Services Regulatory Authority and the setting up of an independent panel of conveyancers across the country who would be specifically responsible for processing all property sales.

“For too long successive governments have been dragging their heels on this issue and it is now time to bring conveyancing into the 21stcentury with a far more streamlined and transparent process,” he said.

Both he and Michael O’Flynn called for VAT on construction to be reduced, making the point it is the home buyer who bears the cost. No VAT exists in Northern Ireland or the UK.

Mr McDonnell said as figures from the Residential Tenancies Board show, the private landlord who has been the mainstay of the rental market is being forced out by onerous regulation and lack of any incentives.

“Current rental laws are skewed totally in favour of tenants, leaving landlords with little comeback from the State’s regulatory infrastructure when faced with irresponsible tenants. Current laws are now, in fact, so disproportionate that they facilitate irresponsible and anti-social tenants who know that if they push hard and long enough, they can live rent free for extended periods,” he said.

“The Autumn Budget will provide a key opportunity for the government to introduce realistic tax incentives for small-time landlords so that they can reap some reasonable return from their efforts.”