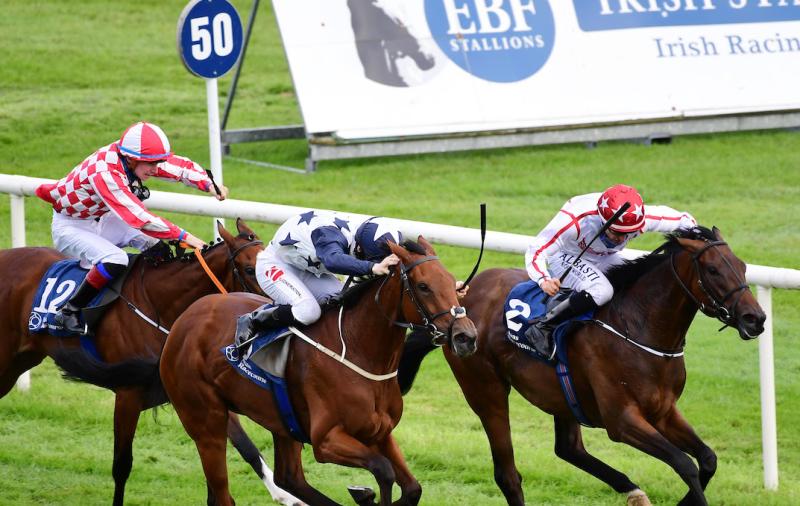 In all, 21 trainers are represented in a fitting climax to another tremendous series in which a total of €699,000 is on offer to connections of two-year-olds that cost €72,000 or less at public auction as yearlings or at the breeze-up sales.

An innovation of the largest sponsor in Irish racing, the Irish European Breeders’ Fund, the Irish EBF Auction Series has generated direct sales activity as a result of the opportunities of offer. John Bourke, racing and bloodstock manager of Syndicates.Racing, who have Mise Le Meas in the mix, explains the attraction.

Mise Le Meas was acquired for £36,000 at the Goffs Orby Sale last year and recently finished third in the Listed Blenheim Stakes at Fairyhouse, having been an Irish EBF Auction Series winner at The Curragh.

“The prize money for the Irish EBF Auction Series Final is too good not to consider and so we had to give Mise Le Meas an entry,” says Bourke.

“It's a fantastic series and as a syndicate, it is extremely attractive to our owners to be able to offer the opportunity of going for such prize money through the maidens and then the Final, without having to take on the superpowers. It also means that when we go to the sales, it is with a view to buying horses that qualify for the Irish EBF Auction Series.”

The average purchase price of the entrants in the Final is €25,210 – marginally above the average price of all runners in the series of €17,000. The lowest handover of cash was for the Ado McGuinness-trained Capitulation, one of four series winners this year bought for less than €10,000, costing just €1,000 at the Goffs February Sale this year before landing the €12,000 first prize on offer when scoring in the Irish EBF Auction Series Maiden at Bellewstown in August.

Having followed up with a very good runner-up finish behind one of the Harrington septet, Leopardstown Irish EBF Auction Series winner and fellow Final entrant Tut Tut, at Listowel on Tuesday, the son of Elzaam must have a great chance of providing a further return on his nominal purchase price.

With weight allowances for cheaper horses, the opportunities in the Irish EBF Auction Series are multiple and this year’s Prix Jean Prat winner, Laws Of Indices is an example of the quality of series graduates, having been purchased for just €8,000 at the Goffs Ireland Autumn Yearling Sale in October 2019 and won his Irish EBF Auction Series Maiden at Navan the following June. His trainer Ken Condon has entered Lexi’s Dream in this year’s Final.

Another series alumnus to score at the highest level this season is the Noel Meade-trained Helvic Dream, who was bought for €12,000 at the Tattersalls Ireland September Sales this time three years ago and won an Irish EBF Auction Series Race at Roscommon the following year. He progressed to elite status when successful in the Tattersalls Gold Cup at The Curragh in May. Meade has five entrants – Chestnutter, Fairy Stone, Hotel Wren, Joe Masseria and Lady Of Inishfree.

Commonstown Stud have always been well represented since the inauguration of the Irish EBF Auction Series, with Eurocrat, Nectaris and the aforementioned Tut Tut having claimed first prizes through the season and assistant trainer Kate Harrington makes no bones about its importance to the yard.

“The Irish EBF Auction Series Final at Naas is an absolutely brilliant race on the Irish calendar. It’s something we always try to target horses for as it’s a great pot,” notes Harrington.

“When you’ve got the upcoming sales, if you buy a horse for less than 72,000 euros, pounds or guineas, it’s brilliant as they’re eligible for these 24 races and then the Final and we’ve been lucky to win a few of them this year.

“Princess Rajj is a lovely homebred filly of Mum’s. She just got touched off in Down Royal when a close third. She might run at The Curragh this weekend and then hopefully she’ll be aimed at the Auction Final.

“Slamadoor ran a great race when seventh in the Tattersalls Ireland Super Auction Sale Stakes at Champions Weekend, beaten less than six lengths. She will be aimed at Naas if she doesn’t pick up a nursery in the meantime.

“Eurocrat was a winner of the Irish EBF Auction Series Maiden at Naas last week when he ground it out well. If the ground doesn’t go too soft, he will be aimed at the Final.

“Nectaris was an impressive winner of the Irish EBF Auction Series Face in Galway. She’s a very nice filly. We’ve given her a little bit of a break since her run at Roscommon. She’s had a little bit of a growth spurt but will also be aimed at the Final.

“Tut Tut was a good winner of the premier handicap at Listowel on Tuesday evening. She’s gone up to a rating of 88 now and if she encounters a little bit of soft ground, it certainly won’t hinder her chances.

“We have two unraced entries. Rock Of Candy is in a winners’ auction race at The Curragh on Saturday. An unraced Fastnet Rock filly, she’s very nice. Villanova Queen is Mastercraftsman filly that we really like and we can hopefully get her qualified for the Final. If we can get in, we will run as many as we can because of the brilliant prize money.”