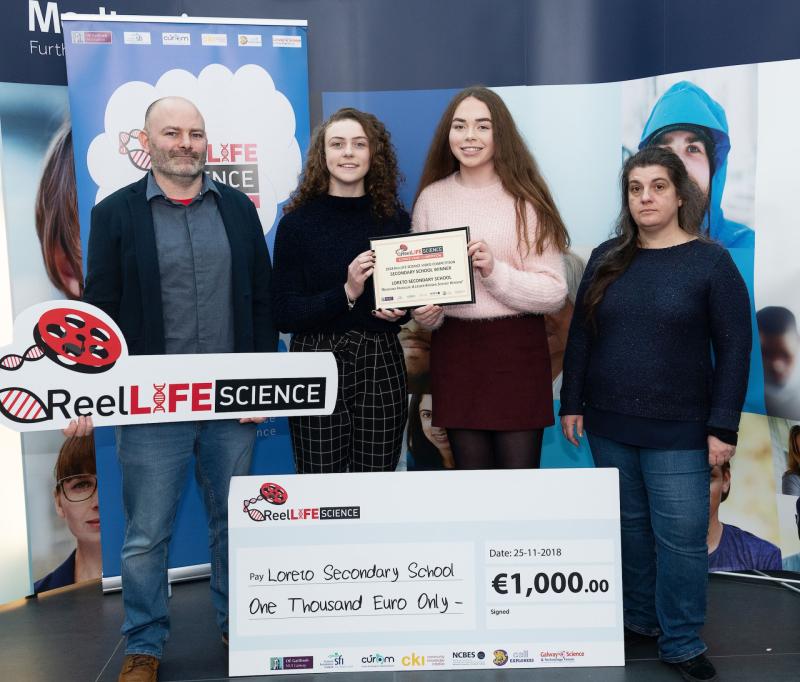 Loreto students Emer Tobin and Katherine Morrow with their award

Transition year students Emer Tobin and Katherine Morrow were proud winners in the Secondary School category of the ReelLife Science awards for their short film about Rosalind Franklin. >bd<

Rosalind was an English chemist who was instrumental in the discovery of the structure of DNA. The awards ceremony took place in the National University of Ireland, Galway, and was presented by Professor Abhay Pandit, Director of the CÚRAM Centre for Research in Medical Devices.

To win the prize, the girls trumped tough competition from over 1,250 science enthusiasts from the 80 schools around Ireland that entered the competition. The winning videos were selected by a distinguished panel of judges, including aeronautical engineer and astronaut-candidate Norah Patten, BT Young Scientist and Technologist of the Year 2018, Simon Meehan and comedian and famous comedian/ TV presenter Dara Ó Briain.

The television personality behind the smash-hit show ‘Dara Ó Briain’s Science Club’ said “I was delighted to be a guest judge in this year's competition and see how much enthusiasm, knowledge and energy is pouring out of Science classes across the country!"

Emer and Katherine’s video, entitled ‘Rosalind Franklin: A Lesser Known Science Heroine’ was praised by Ó Briain as “A really good topic, beautifully presented” while Simon Meehan was “delighted that Dr Franklin’s work was brought to light in this manner and given a chance to be publicly recognised.”

The girls’ video, which is just over three minutes long, is now available to view on Youtube or at www.reellifescience.com.