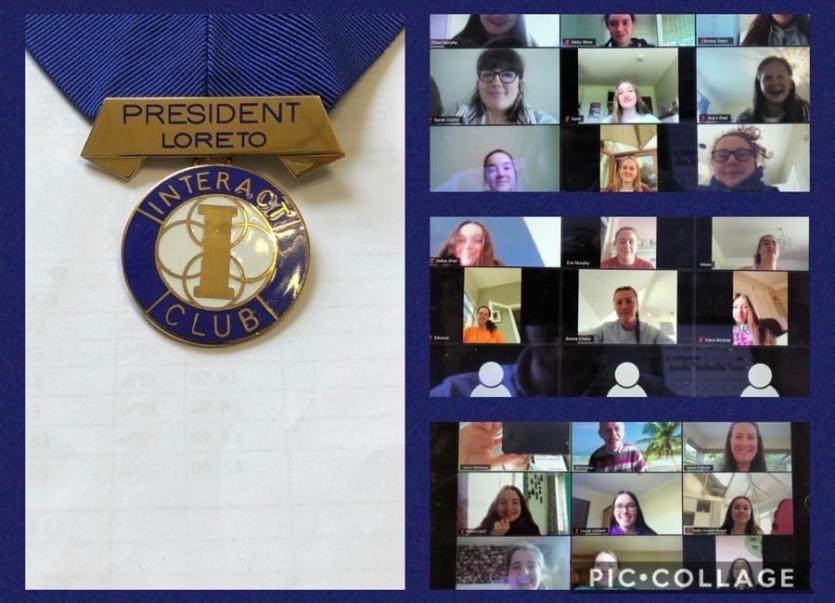 Some of the founding members of Loreto Interact Club

A group of students from Kilkenny’s Loreto Secondary School have stood up as young leaders, not only in Kilkenny and Ireland, but on a world stage.

The young women are the founding members of the Kilkenny Interact Club, part of the Rotary International organisation for secondary school students.

Last week, national leaders in Rotary Ireland joined with local members and the Loreto Interactors to officially charter the club, via Zoom. Despite the coronavirus lockdown the club has been active and already raising money for a local cause.

Rotary Ireland District Governor William Cross said he was thrilled to have a new Interact club established in Kilkenny. He said the young women have embarked on a life changing adventure, and will be able to do some small things to make big changes in the world.

Mr Cross said they will go on to be leaders in their school, community and beyond. As well as telling the Loreto students he will be passing on a letter of commendation from President of Rotary in Great Britain and Ireland, Donna Wallbank, Mr Cross shared the good news that Rotary will be adding to the Interact club’s fundraising.

He said he was touched that the young women were already helping in the community and have embarked on the ‘Ice for iPads’ fundraiser to help provide iPads to the School of the Holy Spirit in Kilkenny. That fundraiser has raised almost €2,000 on Go Fund Me.
Mr Cross said Rotary will be giving an additional €2,000 to help with the project.

Incoming District Governor of Rotary Ireland, Conny Ovesen, said they are an amazing bunch of young women.
“You have shown your parents, families, teachers and fellow students what you are capable of ,” she said.

“Think of what you have achieved, despite Covid-19 you are still here and doing amazing work and showing commitment to your role in society. You have all shown leadership and you are all a role model for young women, not only in Kilkenny or Ireland, but the world.”

Ms Ovesen shared her words of advice: “Be yourselves, trust yourselves and remember to have fun while living your life.”
There was praise for the students from their own school and those they have worked with in recent months, since they first came together.

Elaine O’Dwyer, teacher at the Loreto who helped set up the club, said they first met with representatives of Rotary Kilkenny last October. She hoped five or six of the Transition Years would be interested but was delighted when 27 of the students joined.

“I am immensely proud of the young ladies, they have exceeded the hopes I had for the club,” she said, adding she is so proud they didn’t let Covid-19 stand in their way.
Loreto school principal, Colin Keher (left), echoed her words, saying he is very proud of the students, and the donation to their fundraiser from Rotary shows the importance of the project.

Eve Murphy is the founding President of the Loreto Interact club.
“It’s an honour for all of us to be chartered and to be founding members of this club,” she told the meeting, and outlined the many activities the club members have already been involved in, including attending meetings of Rotary Kilkenny and a Rotary District meeting in Dublin, pre lockdown.

They welcomed a guest speaker from the Chifundo organisation to their club and hope to help raise funds towards the education of children in Malawi. The Kilkenny Interact club are also forging links with Interact clubs around the world.

The major project for the Interact club is the Ice for iPads fundraiser. They hope to raise €5,000 to provide iPads to students of the School of the Holy Spirit who can not access learning and educational resources during the lockdown. That has almost hit its target, but you can still donate on Go Fund Me.

Other members of the new Interact club spoke about why they joined and how they have enjoyed their involvement.
Karen Lowther, principal of the School of the Holy Spirit, thanked the Interact club for their support. “What you have done for us is empower us to allow children to learn into the future. Your passion and dedication shines through,” she said.