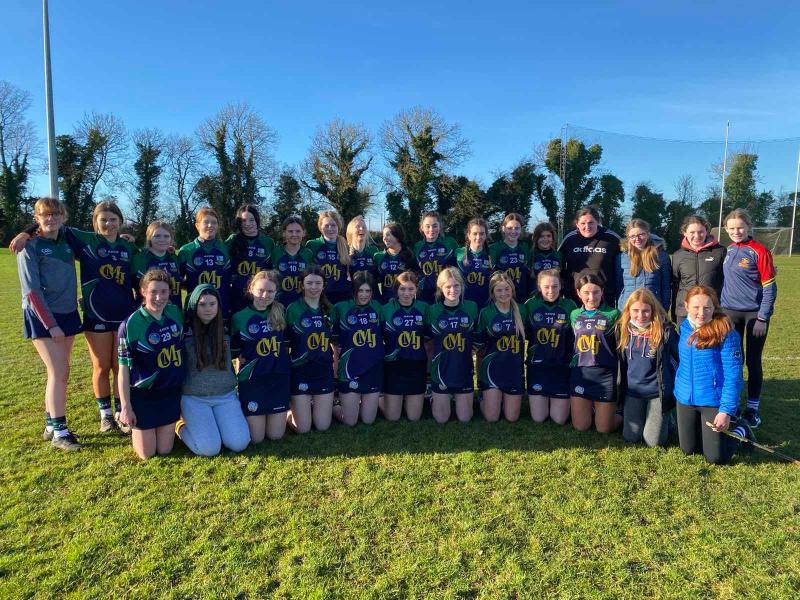 Unfortunately, it was not the result we wished for, but it is very important to remember the tremendous journey this group of girls have been on, since the beginning of the year, and the excitement they brought to the school.

Under the guidance of Ms Walsh and Ms Moloney, this panel have represented the school, their clubs and their families with distinction and they should be very proud of what they achieved, especially in winning a Leinster Final.

This game was played on the Fenians GAA pitch in Johnstown in very tough conditions, with extremely strong wind and some heavy rain, making it difficult for the game to flow. The Johnstown girls played against a gale force wind in the first half, expecting scores would be hard to come by, and their defenders to be very busy. The first score of the game came in the fourth minute, from play, for the Galway school, off the stick of Lisa Shields.

In the eight-minute Lisa Shields scored her second point from a free. With conditions deteriorating it was hard for players to win primary possession, the Coláiste Mhuire girls were struggling to create attacks and Seamount had most of the play. In the tenth minute Ella Bergin scored a point to stretch the lead to three points, this was quickly followed by a pointed free from Lisa Shields in the fourteenth minute.

As the game approached midway through the first half Johnstown were on the attack and the ball ended up in the back of the net from Niamh Queally, narrowing the lead to the minimum, this was to be the only score of the half for Coláiste Mhuire. For the rest of the half, it was very tough to make scoring chances with both sets of backs playing well. The only other score in the half was a point for Seamount PP from Mia Rogers.

At half time the Kilkenny school were trailing by two points, on a score line of 1-00 to 0-05. The second half began frantically, and the local school were desperate to improve their scoring with the aid of the strong wind, in the third minute Catherine Kirby scored an excellent point from play, to reduce the deficit to the minimum.

At this stage of the game Coláiste Mhuire had most of the play and in the twelfth minute a pointed free from Orla Brophy brought the Johnstown team level. Unfortunately, this would be their last score of the game, they had numerous attacks but were unable to register a score, in the twenty second minute a decisive score came for Seamount PP, when Beibhinn Walsh scored a goal, this gave the Galway girls a massive lift and deflated the Coláiste Mhuire team.

For the remainder of the game Ella Bergin scored three more points to bring her tally to 0-04, a tremendous return considering the conditions. Two more points for Seamount left the score at the final whistle 1-10 to 1-02.