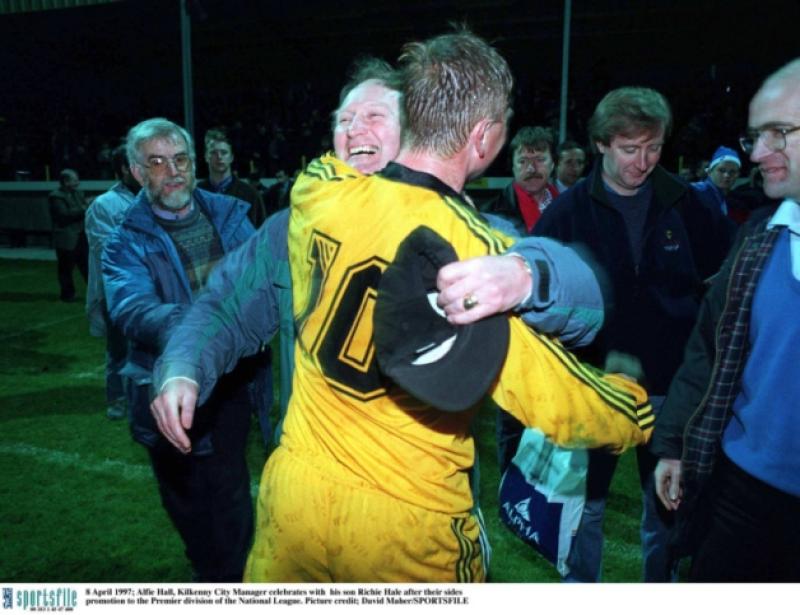 Kilkenny City supporters will have the chance to relive the club’s glory days when two former managerial masterminds pit their wits on the pitch this weekend.

Kilkenny City supporters will have the chance to relive the club’s glory days when two former managerial masterminds pit their wits on the pitch this weekend.

Buckley Park is the place to be this Saturday as the big match, the meeting of Billy Walsh’s side with an Alfie Hale selection, takes centre-stage (kick-off 6.30pm).

Promoted by Kilkenny City and Newpark FC the match, which has been called the Buckley Park Reunion Challenge, will see two ranks of the cream of the Kilkenny City crop and special guests go head-to-head in what is sure to be an entertaining encounter.

Leading the way will be Alfie Hale’s Kilkenny City side who captured the attention of the South-East when they won the First Division title. Many of the team, who earned Premier Division football for the first time in City’s history, will be back in Buckley Park for Saturday’s clash. Legends such as Brendan Rea, David Breen, Moc Reid, Paul Devereux, Paschal Keane, Paul Cashin and Craig ‘Rocky’ Maher are all expected to feature.

The playing squad doesn’t just feature players from the Kilkenny City days. Also in action will be Paddy Geoghegan, a member of the Emfa team that won the League of Ireland Shield in 1987.

The match will also feature plenty of local players who donned the black and amber of City and starred in the Kilkenny & District League. The group will include the Walsh brothers Ollie, Billy and Michael, as well as Mark and Niall Andrews, both of whom gave great service to the Cats. Long-serving Airtricity League of Ireland stalwart Davy Mulcahy is also on the teamsheet, as are Simon Walton, Jim Nugent, Peter Murtagh and Tommy Buckley, a grand-nephew of the late Marty.

Conor Best will team up again with Ollie Walsh, the twin strikers from Eamon Gregg’s team.

Of course it wouldn’t be Kilkenny without some special guests from other sporting fields. A number of the county’s famous hurlers will switch codes and line out in the big game. Among them will be senior All-Ireland winning captains Andy Comerford and Willie O’Connor, with Charlie Carter, Brian McEvoy, P.J. Ryan and Liam Simpson also showing off their soccer skills.

The teams will be played onto the pitch by the Kilkenny City & District Pipe Band. They will be introduced to Mayor Joe Malone and Tom Hogan, former player and referee, who is the Guest of Honour.

The game has been brought to reality thanks to the assistance of sponsors TC Tyres and Morrissey Motors Peugeot in conjunction with Errea Sport, along with the Sceilp Inn.

The Kilkenny branch of the Irish Soccer Referees’ Society will supply the match officials. Taking charge of the whistle will be referee Ollie Falsey, who will be assisted by Eoin Walsh and Vinny Kiely.

Admission to the game is €10 for adults, €5 for OAPs and teens, with under-12s admitted free. Tickets are available from a number of outlets, including TC Tyres, Pat Carroll’s and the Sceilp Inn.