Czechs get bounced as Brennan grabs an international brace 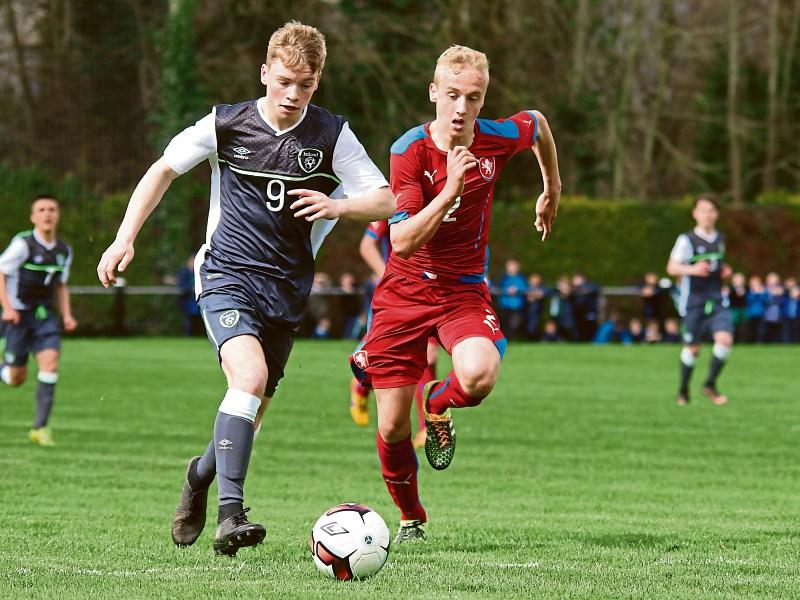 As far as weeks go, it’d be hard to top the one that Kilkenny’s Ciaran Brennan has just experienced!

Seven days after captaining St Kieran’s College to All-Ireland glory, the East End United hitman was on target as the Republic of Ireland’s under-15s scored an impressive win over the Czech Republic.

Brennan led the line with distinction in the second of two friendlies against the Czechs, scoring twice in a 3-1 win as the Irish made it two victories in three days against their European counterparts.

The striker was still on a high after the game, bearing a broad smile that ran from ear to ear.

“It’s brilliant,” he said after the final whistle at Cahir Park. “I got my chance to start the game today and said I’d try my best. I just wanted to give a good performance to help the team.”

Brennan was playing down his performance a little - from the off he helped Ireland take control of the game. Playing at the top of the attack he had the Czechs on the backfoot, linking up well with Marc Walsh and Callum Thompson as Ireland used their pace from the wings to trouble the opposition.

Walsh was heavily involved in Brennan bagging the opening goal – his first international strike for Ireland – after just nine minutes. Pouncing on a short kickout from Kvido Formanek, Walsh seized possession on the right and zipped a short pass inside to Brennan.

Bursting past his man Brennan tore into the box. He waited for Formanek to leave his line, then coolly slipped a low shot beyond the ’keeper’s outstretched right arm.

“I just remember telling myself to put it low and hard into the corner,” he said, reliving the experience of his first international goal. “Thankfully it went in.”

The goal gave Brennan the confidence he needed as he toiled away up top, often on his own for long spells. It was a hard job against what was a physical Czech defence.

“They were a tough side,” he said. “You had to try and get in behind them all the time – you couldn’t call for the ball to your feet because they were so strong. I had to make the runs in behind.”

Using their pace Ireland really hurt the Czechs, who were intent on avenging another loss to Ireland from earlier in the week.

“We came out determined to attack but they played even tougher than in the first game,” said Brennan, speaking of Ireland’s 5-2 win from the opening game in Clonmel. “They wanted to beat us after losing the first game, but thankfully we played really well again and got over the challenge.”

To do that Ireland had to take control of the game again. They were hauled back to level terms when Vit Kolar blasted a fine free-kick home from inside the D midway through the half.

Ireland pushed hard for another goal before the break, with Brennan at the heart of their moves. He did well to lose his man and get on the end of Walsh’s 33rd minute corner, but his back-post header was well held by Formanek.

He had another bite at the cherry a few minutes later, when Sean Brennan cut the Czechs open with a searing run from midfield, but his low cross was just beyond Brennan’s reach.

The sides remained all square until half-time, but within seven minutes of the restart Brennan had Ireland ahead once more. Charging down defender Tomas Vincour’s clearance the Kilkenny teenager raced into the box, but was hauled back by the Czech captain.

With referee Johnny Walsh pointing to the spot, Brennan took the kick. He made no mistake, drilling the ball away in the bottom right corner.

“I was on penalties so I knew I would be taking the kick,” he said. “I had my mind made up to put in away in the corner and it paid off.”

Brennan had chances to grab more goals before he was taken off, but he was more than happy with his brace.

“To get two goals is brilliant,” he said. “I had been waiting a while for the first, and to score for your country is an amazing feeling. There’s a lot of pressure to get that first goal, but now that I’ve scored hopefully I’ll get more.”

That goal took the wind out of the Czech Republic sails, but Ireland did put the gloss on a great performance when Callum Thompson grabbed the goal his game deserved with a thumping free-kicks in stoppage time.

By that stage Brennan had left the field, to be replaced by Adam Idah. However, his season isn’t over by a long shot – both he and Idah, who was part of the Douglas side Kieran’s beat in the All-Ireland final, will be called into action again soon as their schools face sides from across the UK.

“Having reached the All-Ireland final ourselves and Douglas will get to play against teams from England, Scotland, Wales and Northern Ireland in a tournament (at the AUL Complex) in May,” he said. “That’s going to be a good competition and will give us a chance to end our year on a high.”

From All-Ireland winner to international goal-scorer and club success to trials cross-channel. It’s been some season for Brennan.

“It’s been a brilliant year for me,” he finished. “Hopefully it keeps going in the same way.”