Callan United get that winning feeling - at last! 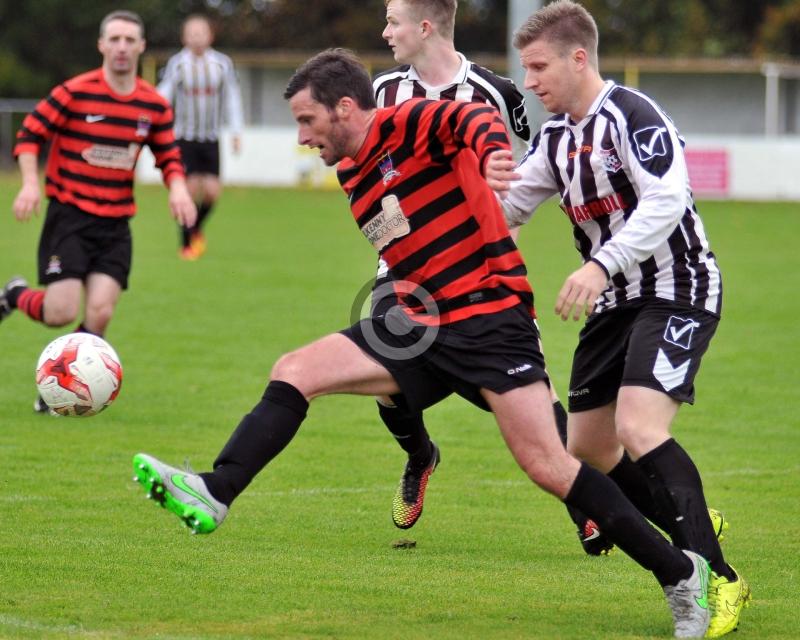 Brian Doheny was on target as Callan United earned their first Premier Division win of the season. Photo: Michael Brophy

Callan United A finally savoured that winning feeling when they notched up their first Premier Division success at the weekend.
To say it hasn’t been a great season for the team might be putting it mildly, but they earned their maiden win at the ninth attempt when they took all three points home from Stoneyford on Sunday morning.
Goals from Dylan Dunphy and Brian Doheny did the trick as Callan beat Stoney’ 2-1, James Moran replying for the hosts.
Meanwhile in Division One Fort Rangers continued their resurgence in form when they saw off Newpark 3-1 in Wallslough.
Two first half goals from the in-form Kenny Morris sent Rangers on their way to a fourth league win in six (they’ve also had two draws).
Brian Maher pulled a goal back for the city side, who used the wind to bombard their hosts, but a late Eddie Nugent goal sealed the win for Rangers, who are unbeaten in 2017.
Clover United A edged their way back to the top of the Division One table, finishing their league campaign with a 3-2 win at home to Bridge United.
Brian Bowe, Damien Madden and Shane Bowe were on target as Clover moved a point above Highview Athletic A. Eoin Kavanagh and Shane Murphy scored for Bridge, who are in danger of being sucked into a relegation battle.
Deen Celtic A kept their promotion hopes on track when they scored a 4-1 win at home to the Lions A team.
Bouncing Back
The Castlecomer side have turned the corner, bouncing back from successive losses to promotion rivals Highview and Clover, with two wins in succession.
Celtic grabbed the initiative early on, Peter McPhillips volleying them into a 14th minute lead when he hammered Johnny Dowling’s cross to the net.
It didn’t take Lions long to respond, Daniel Bergin levelling matters within seven minutes. The goal was a reward for their hard work, as they kept Celtic at bay for the remainder of the half.
The pressure told on the restart, however, Colin Phelan taking just four second half minutes to shoot his side back into the lead. Deen played with purpose in the new half and strengthened their lead when Steven Daly finished after some good work by Dowling and Gavin Mackey.
Celtic pushed hard for more goals, going close with chances from Mark Delaney, Jason Carroll and Phelan before McPhillips wrapped up the spoils after the hour, rounding the ’keeper for his second and Deen’s fourth of the day.
’Green Go Up
Brookville made it two wins in as many games when they beat St Ann’s 3-0 in Division Two on Sunday, but their promotion hopes were ended as Evergreen C took all three points in a 2-0 win away to Callan United B.
Pa Leahy and a Kevin Ireland penalty did the trick for Conor O’Neill’s side as they earned the win that secured promotion alongside Castlewarren Celtic to Division One next season.
It’s been a great campaign for the city side, who have lost only one game all season - they went down 3-2 to Brookville in their opening fixture back in September.
Since then they’ve dropped just four points with two draws in 11 games. They have now won their last six league games, a run that goes back to a 3-2 win over Paulstown 06 on December 4.
The season could get even better yet for the ’Green. They are level with Castlewarren Celtic and have a game in hand on their title rivals.
There was one game in Division Three, where Deen Celtic B wrapped up their league campaign with a 4-0 win over Thomastown United C.
McCalmont Cup
Champions Thomastown United A will begin the defence of their McCalmont Cup title with a home tie against Paulstown 06.
The draw, which was made on Saturday, saw United as the fifth team picked from the hat in the Kilkenny & District League’s top Cup competition.
Thomastown won the Cup on an unforgettable night last May, beating Evergreen A in a dramatic final. The match, which was suspended to allow torrential rainfall to be brushed off the Derdimus pitch, was locked at 1-1 after C.J. Browne’s early goal was cancelled out by a Sean Barcoe strike.
The thriller went all the way to sudden death penalties and a showdown between the goalkeepers. Paul Dunne netted for Thomastown before saving his opposite number Packie Holden’s kick as the Grennan men won 8-7, ending a 40-year wait to get their hands on the Cup.
Last season’s beaten finalists have been handed an away tie in their opening game of the 2017 competition and will take on Division Two leaders Castlewarren Celtic.
Other games of note include current Premier Division table-toppers Freebooters A at home to Clover United, while there is an interesting all-Division One clash between promotion-chasing Deen Celtic A and Fort Rangers, both of whom are also in the semi-finals of the Pat Maher Shield.
McCalmont Cup first round draw: Freebooters B v River Rangers, Bridge United v Brookville, Thomastown United A v Paulstown 06, Castlewarren Celtic v Evergreen A, Thomastown United B v Evergreen B, Deen Celtic A v Fort Rangers, Ormonde Villa v Evergreen C, Freebooters A v Clover United, Deen Celtic B v Stoneyford United, St Ann’s v Lions, Newpark v Callan United A, Ballacolla v Highview Athletic B, Thomastown United C v Evergreen 46.
BYES: Highview Athletic A, St John’s, Callan United B.