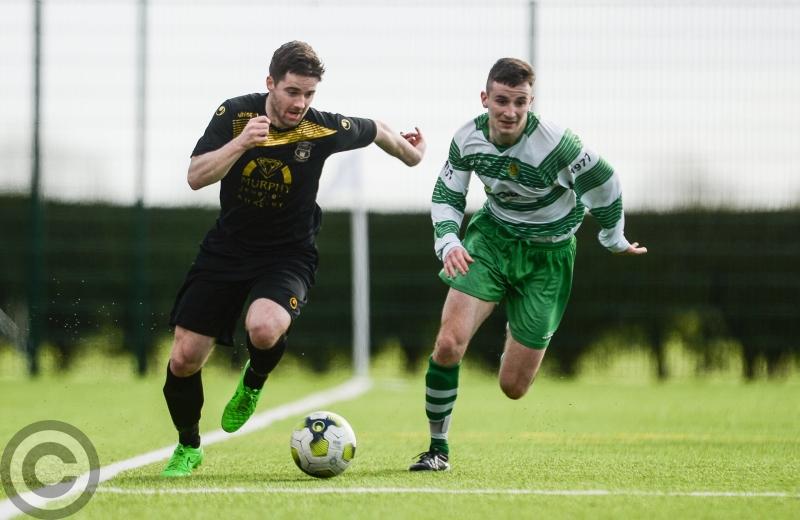 An ice-cool finish, a steely defence and a little bit of luck were just some of the ingredients that comprised Evergreen’s latest adventure in the FAI Junior Cup.
Packie Holden’s side will be the first to admit that they didn’t play to their best, and that a little bit of good fortune smiled on them, but they showed composure to kill off Limerick side Kilmallock United and march until the semi-finals.
Mikey Drennan was the match-winner for Evergreen, hitting the only goal in a tense and tight game that caused a packed Kells Road to explode with delight.
Ironically, the goal came at a time when Evergreen were on their heels. Kilmallock had been driving forward in search of a goal, with the tricky Jack Barry surging forward at the home defence.
Jinking towards the box, Barry’s run was halted by a timely tackle from Sean Barcoe. Suddenly, the tables had turned.
Switching defence into attack, Evergreen were a changed side. Barcoe pushed the ball forward a few yards, then clipped a great ball downfield for Drennan to chase. Splitting the central defensive pairing of Jason Heffernan and Ben Burke Drennan dashed into the box before getting his shot away. Goalkeeper Rob Egan did well to get both hands to the ball, but couldn’t stop it from looping up and over his body.
The ball seemed to hang in the air for an eternity, then finally dropped into the back of the Kilmallock net.
If there was luck about how the ball ended up in the net, the same could be said for the scorer. Drennan had started in the middle of three attacking midfielders, but was pushed up top after Ben Hickey went off injured.
The goal flattened a Kilmallock side who, up to that point, looked more likely to open the scoring.
The visitors made a similarly bright start to the first half, using their pace along the wings to trouble Evergreen. Playing on the all-weather surface didn’t faze Kilmallock as they displayed a deft touch and impressive control from the off.
Fought Fire with Fire
Evergreen knew they were in a game, but fought fire with fire. They nearly made a dream start, when Sean Barcoe controlled a long Packie Holden kick-out and shrugged off a defender before getting off his shot, but Rob Egan did well to get down to his right and stop the early threat.
Kilmallock were no slouches when it came to fashioning chances of their own. Some swift inter-play unlocked the Evergreen defence and almost led to the opening goal on 11 minutes.
Tommy Heffernan, Jack Barry and Paul Doona linked up well in a fast move that saw play switched to Barry Sheedy.
Using some excellent footwork Sheedy made some space for himself, then unleashed a shot that curled towards the inside of the far post. The net seemed destined to shake, but Packie Holden made a superb save, getting a strong left hand behind the ball to push it past the post.
Evergreen took over in attack after that, but for all their efforts they couldn’t breach the Kilmallock defence. A swirling wind didn’t help their cause, taking the ball away from danger at times while also forcing them to alter the direction of any free-kicks that would normally have been fired right into the mix.
They changed things up a little, going short with quick balls to full-backs Tommy Earls and Robbie Quan, a tactic which allowed Evergreen to use their pace to good effect. One such attack gave Chris Whearty possession on the wing, where clever footwork provided space to fizz a low ball into the centre. Ben Hickey read the delivery and reacted well, but he couldn’t stay onside.
The hosts kept looking for a way to break the deadlock and went close to doing so on the half hour. Sterling work saw Barcoe battle to keep the ball in play in the corner, before a neat layoff felt to Mikey Drennan, but his dipping volley was deflected over the bar.
Fright
Kilmallock had been on the back foot for a spell, but showed they weren’t out of the game altogether. Within minutes they gave their hosts a real fright after Paul Doona’s corner was only half-cleared. The ball fell to Niall Hanley, who unleashed a venomous shot from the edge of the box, but it flashed inches wide of the target.
Injury to Hickey forced Evergreen into a change before half-time, with Sammy Johnston entering the fray, but it didn’t alter their approach. They had another go at breaking the deadlock five minutes from half-time when a Holden clearance released Conor English down the left.
Using his pace, English tore past the United defence and burst into the box, pausing only to fire off a low shot, but Egan did well to get down smartly and make the save. 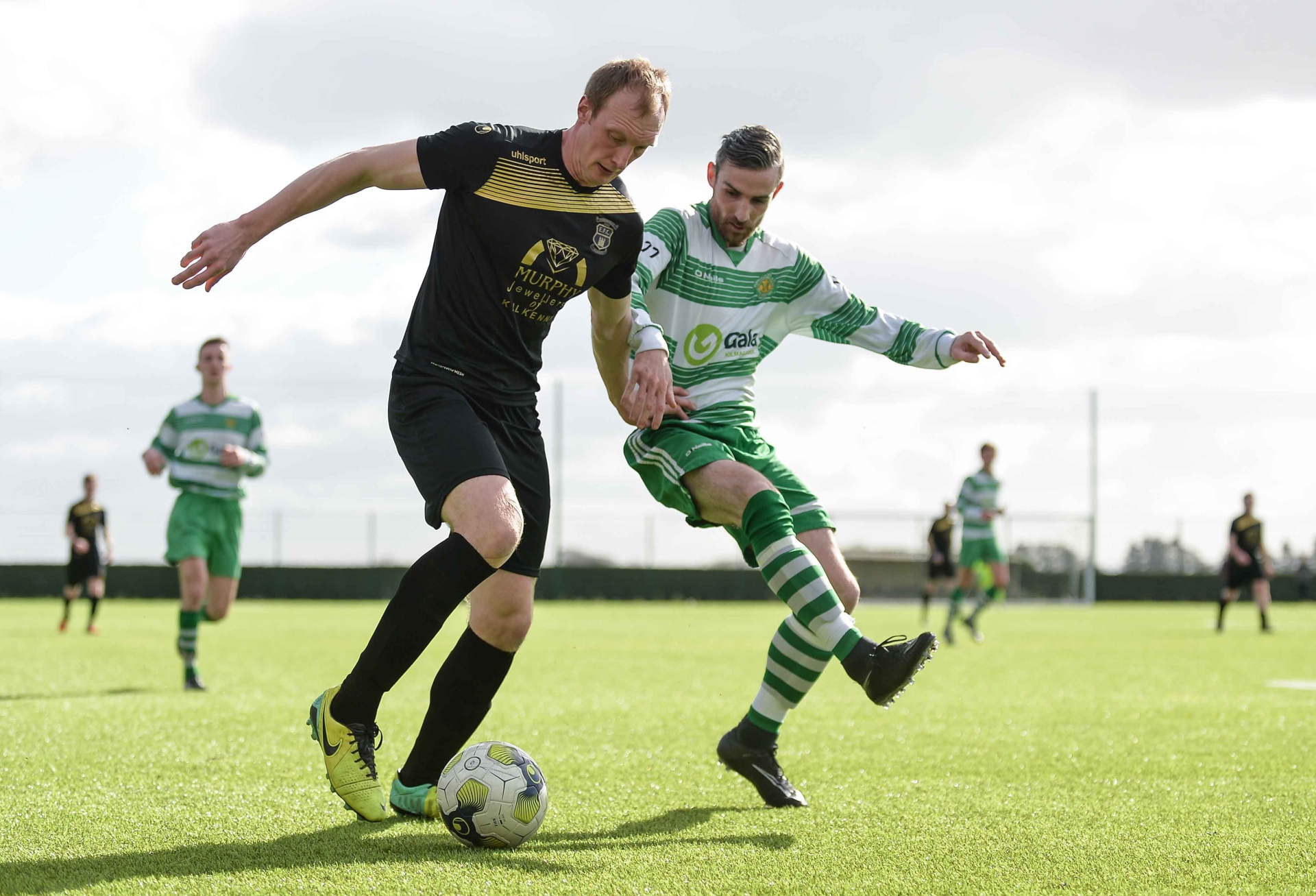 The stalemate continued into the second half, but Kilmallock went within millimetres of breaking in within minutes of the restart. Watching as Jack Barry drilled in a ball from the right Paul Doona made space for himself and cracked a menacing shot goalwards.
For a split-second, the Kells Road froze as the ball looped over Packie Holden and dipped towards the net, but it thundered back off the bar and bounced into the arms of the grateful ’keeper.
The chance came in the middle of a real bright spell for Kilmallock, who pushed Evergreen back on their heels. Midfielders Barry Sheedy and Niall Hanley held firm in the centre, shutting down space in which the home side could move, while the Limerick full-backs pressed on at every opportunity.
At that stage it looked like Kilmallock were getting close to scoring, but the wind was taken from their sails when Drennan pounced for his breakaway goal – how quickly the tables turned!
Evergreen were all fired up after that goal, and almost grabbed a second through their newfound momentum with 11 minutes left. With Kilmallock struggling to regain their shape they were caught when Barcoe broke up another Limerick move, robbing Doona of possession and releasing Drennan on another marauding run with a telling pass.
Fierce Shot
With a wary defence backing off Drennan had time to hare down the left and fire off a fierce shot, but Egan managed to palm the ball to safety. The danger wasn’t over, as Conor English’s corner was only cleared as far as Chris Whearty, but his shot was deflected out for a corner.
Kilmallock survived that scare and, as the clock began to wind down, started to turn the screw in their effort to find a winner.
It was in the closing stages that Evergreen’s defensive strength came to the fore. Skipper Niall Andrews and Dylan Whearty kept things tight in the centre of defence, with all their colleagues more than willing to help when needed. Sammy Johnston was one, dropping back from midfield on more than one occasion to snap the ball away from a Limerick player.
Kilmallock threw everything forward in the closing stages (that included goalkeeper Egan!) but they couldn’t find a way through. That said, they spurned chances which, in the cold light of day, will have haunted them. Sub Eoin Burchill had a great chance to level matters when he sprang the offside trap to get on to Paul Doona’s 88th minute pass, but he dragged his shot wide of the inviting goal.
Burchill went closer again in stoppage time, pouncing when Paudie Sheedy turned Barry Sheedy’s corner into his path. Burchill seemed certain to score, but scuffed his shot at the last second, much to Evergreen’s relief.
Evergreen: Packie Holden; Robbie Quan, Dylan Whearty, Niall Andrews, Tommy Earls; Brian Jordan (Declan McQuillan, 82 mins); Chris Whearty (Lee Delaney, 90 mins), Mikey Drennan, Sean Barcoe, Conor English; Ben Hickey (Sammy Johnston, 38 mins).
Kilmallock United: Rob Egan; Niall Burchill, Jason Heffernan, Ben Burke (Eoin Burchill, 68 mins), Paul Moloney (Anthony Barrett, 46 mins); Barry Sheedy, Niall Hanley; Killian Hayes, Tommy Heffernan, Jack Barry (Paudie Sheedy, 81 mins); Paul Doona.
Referee: Adam Conroy. Assistants: Wayne Kelly, John Thornton (AUL).