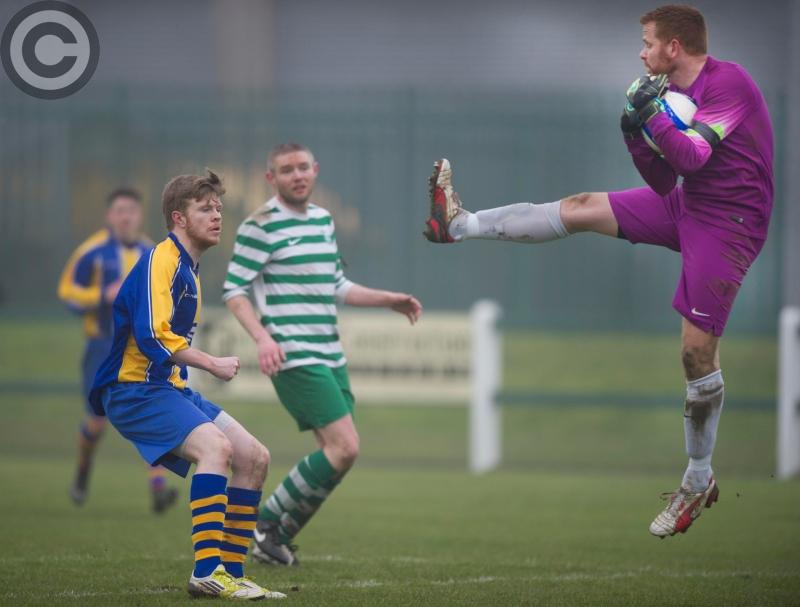 A post-match ‘meal’ of water and painkillers highlighted the battle he had been through, but Packie Holden hadn’t expected anything less.

“Without a doubt that was the toughest game we’ve played this year,” said Evergreen’s player-manager in the aftermath of their FAI Junior Cup quarter-final win.

“Kilmallock put us to the pin of our collar, played much better football than we did, but I think if you look back on the game we tested their goalkeeper than they tested me.

“I had one save in the first half and they hit the crossbar, but I think we were always knocking on the door with set-pieces,” he continued. “We were always dangerous from counter-attacks.

“You have to play whatever way the game comes to you, use whatever cards you’re dealt,” he added. “Thankfully Mikey (Drennan) put away a great finish. We’re delighted to get that win.”

Kilmallock boasted plenty of pace and a real threat, but a calm Evergreen defence kept them at bay.

“Niall Andrews was colossal out there,” he said. “He was immense. It’s a testament to Niall how he keeps coming back year after year and leading the group. He’s been captain of this group for the last number of years.

“People talk about experience and if it’s worth it - it’s only on the big, big games that it really kicks in. Niall has it in spades. He showed that today.”

While the captain’s performance attracted the plaudits he wasn’t the only Evergreen player to earn the manager’s praise.

“I wouldn’t swap any of our team for anyone,” he said. “We have lost a lot of people from our squad. Lee Delaney is only back from injury, Jason Quan and Jamie Owens have long-term injuries while Darragh (Walshe) and Simon (Burke) are away studying and travelling respectively.

“It’s been a drain this year, but others have stepped up,” he said. “Sammy Johnston has played with the B team this season but he played outstandingly well in the game. It really is a squad achievement - I’m delighted for everyone.”

The club was abuzz following Sunday’s win. All were looking forward to the semi-final with Boyle Celtic and dreaming of what could be.

“Our aim is to win an FAI Junior Cup,” the manager said. “To win it would be a just reward for the effort and investment that has gone on here over the years.

“Guys like Mick Hennessy, Peter Henebry, Shane Daly, my brother Brian, they’re lifers,” he added. “Every night there’s a committee meeting here. Winning the Cup would be a reward for all involved with the club.”