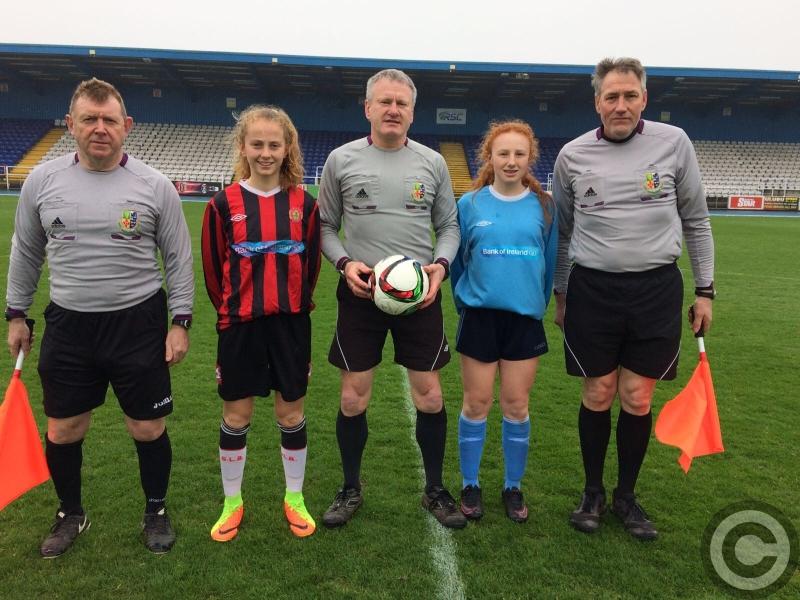 The captains and match officials before today's game at the RSC, Waterford

A top class performance saw the girls from the Presentation Kilkenny roar into the FAI Schools Minor Cup final.
The Cats showed their claws when it mattered - and a keen eye for goal - as they put one over old foes Presentation Thurles at a wet and windy RSC today (Thursday).
Playing against a strong wind the Kilkenny girls struggled to get to grips with the elements early on. They almost fell behind within two minutes when Emma O'Sullivan played Enya Maher through on goal, but Kilkenny goalkeeper Reece Delaney made a brave save at the striker's feet.
Backed by the impressive Aoibheann Clancy the Thurles side did most of the pressing in the early stages, but Kilkenny's confidence grew the longer they kept their rivals scoreless.
That confidence surged when Kilkenny took the lead in the 16th minute. Thurles failed to deal with Alicia Manogue's dangerous free-kick and paid the price when the ball spilled loose in front of Niamh Phelan. She made no mistake from just a few yards out, instinctively knocking the ball home.
Kilkenny were in control after that, limiting the Tipp side's time on the ball as they started to squeeze them out of the game. They took a huge step towards the final when they doubled their lead in the 43rd minute, Manogue smashing an unstoppable penalty to the net after Melissa Walsh had been upended in the box.
They made sure of the win two minutes from time. Manogue capped a memorable day for her and her school when she grabbed her second goal and Kilkenny's third, pouncing on a teasing Cliodhna Donnelly cross to seal the victory.
Pres Kilkenny will play Donegal's Moville CC in the final on April 26.
Pres Kilkenny: Reece Delaney; Anna Purcell, Shauna Cody, Kirsten Hanney, Katie Ryan; Melissa Walsh, Cliodhna Donnelly, Bri O'Donoghue, Keara Ryan; Alicia Manogue, Niamh Phelan.
Pres Thurles: Saoirse Teer; Chloe Cummins (Ellie Maher, 31 mins), Chloe Gleeson, Megan Quigley (Chloe McAuliffe, 54 mins), Ellen Moore; Caroline Shanahan (Lillian Murray, 31 mins), Kate Cavanaugh (Emma O'Sullivan, 56 mins), Aoibheann Clancy, Queva O'Meara; Emma O'Sullivan (Chloe Cummins, 46 mins), Enya Maher (Maeve Brennan, 50 mins).