Day of huge sacrifice, but Evergreen effort helps Holden lay the ghosts of 1999 to rest 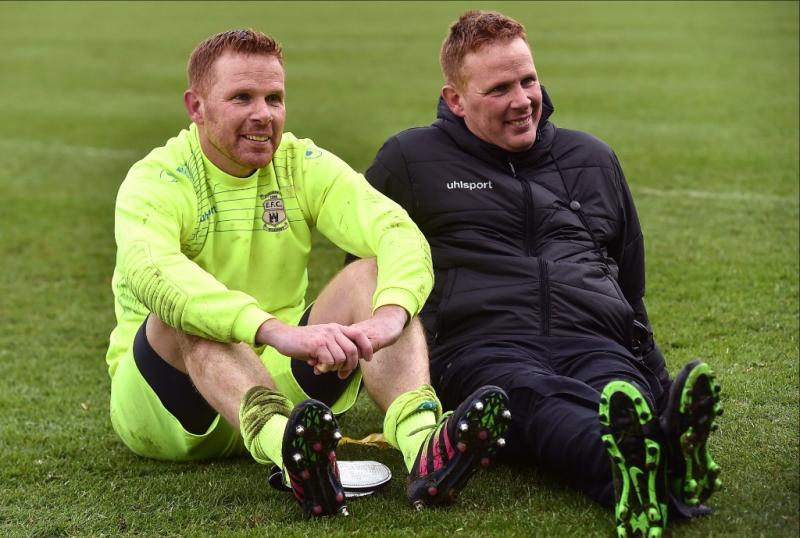 It was an eventful afternoon for Packie Holden, but those ghosts from 1999 were finally laid to rest.
Evergreen’s player/manager had an eventful day at The Showgrounds on Sunday, but after a series of twists and turns he was finally able to celebrate reaching the FAI Junior Cup final.
“Before the game I could sense there was a steely determination about this team,” he said. “There was real focus, concentration and desire about the side to put our stamp on this competition once and for all.
“For so many years we’ve fallen down through poor results and lack of preparation. I can guarantee you one thing - that wasn’t the case any time this year.”
For Holden, who played in Evergreen’s last Cup semi-final appearance back in 1999, the pain of that defeat was banished after Boyle Celtic were beaten on penalties. Victory, however, was far from easy.
“Anyone who watched the DVD of the Carrick game would have seen how good a team Boyle Celtic were,” Holden said. “They took the lead after a sloppy mistake from me - it was a definite penalty, no questions asked - but we came in at half-time and regrouped, changed the shape of the team slightly and went at it again.”
Holden was quick to praise the fallen Boyle side. In a nice touch he dashed across to their players after the final whistle, shaking hands with many of the squad before applauding the massive Celtic crowd who were packed into the stands to cheer their heroes on.
“Boyle were fantastic,” he said. “They were brave in their own style of play, but when you get to penalties it’s 50-50. We were blessed to be on the right side of the result.”
Much of that came down to Holden’s performance between the sticks. His save to deny Gerry McDermottroe in the shootout, which followed on from a successful Tommy Earls kick, saw Evergreen take a lead they would not lose.
“I was happy enough to get my hand to the second penalty,” he said. “I felt I owed the lads big time after conceding that penalty in the first half. I was determined to get behind one of those penalties.
“I got my hand to the third one too - I probably should have stopped it - but who cares? We’re representing Evergreen in the Aviva Stadium . It’s a just reward for the hard work and commitment the boys have put in.”
The players weren’t the only ones who were showered with praise by the manager. The huge support cast that is the club also had a part to play in Evergreen reaching the final, he reckoned.
“I have to mention the club and the hard work of Peter Henebry and the committee,” he said. “The facilities that were laid on for this game were second to none. We couldn’t have asked for anything more in terms of preparation for this massive occasion.
“I think the guys really paid that back with a magnificent performance,” Holden continued. “The game had real bravery, passion and desire and a lot of good football. It’s been levelled at us that we play on a tight Astro-Turf pitch and go back to front, that we’re a long ball and set-piece team - we can play any way, in any conditions.
“We can play on any pitch, but if you give us good facilities to express ourselves we have the players who can do that,” he added. “Players like Niall Andrews, Dylan Whearty, Tommy Earls, Robbie Quan - I could rattle them all off (and Holden did, reeling off the entire Evergreen squad).
“Those boys are absolutely magnificent,” he said. “They are so comfortable on the ball. We played today, and we were brave. And we got our just reward in the end.”
Another key part in Evergreen’s success came in the form of their families. It hasn’t been easy, planning for the final, but the support of loved ones played its part.
“I have to say a big thank-you to the girlfriends, wives and partners of all the players,” the manager said. “The commitment levels that we (the management) demand from the lads isn’t easy, so when we bring our partners to the Aviva for the final it will be a little bit of payback for the years of sacrifice that they have given for the lads.
“That thanks goes to our parents too, the committee, the supporters who drove here for the game. They really spurred us on in the second half when we got on top and helped us get across the line. Getting to the final is payback for everything people have given us.”
Now, many years after that loss to Ballymun United in Arklow, Holden could savour that winning feeling. It was a moment to cherish.
“Eighteen years ago I was in the same situation Boyle are now, on the losing side in a Cup semi-final,” he said. “We probably took it for granted that we would be back year on year but it doesn’t happen.
“It takes an outstanding team to replicate form over a long period of time and that’s our goal,” he said. “We want to kick on, to win the competition. We want to prepare correctly for the final and to represent Evergreen as best we can.”