Making the Aviva means so much for Evergreen's Mikey 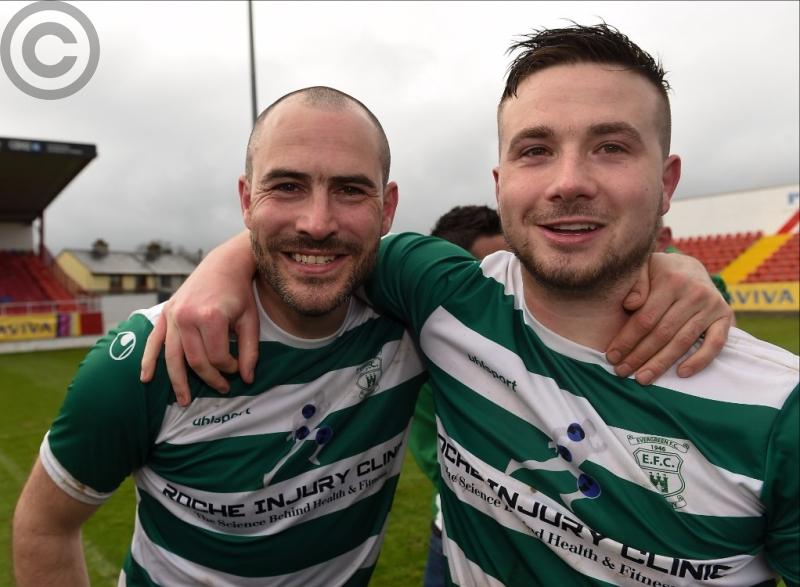 He’s had plenty of highlights in his young career, but getting to the Aviva Stadium with his hometown club? That’s the crowning moment for Mikey Drennan.
“To play there with my club means so much to me,” he said. “The final whistle was the first time I’ve cried with joy after a game. It’s something that means so much to me and to everyone else who played out there,.
“You could see it throughout the game,” he pointed out. “There were people going down with cramp - I know we play a lot of our games on Astro-Turf; maybe we need to get on the pitch more - everybody emptied the tank for that game. Boyle put pressure on us in extra-time, but we stood firm until penalties, when Packie was the hero in the end.”
Despite going a goal behind Evergreen showed incredible composure not to let their heads drop as they chased a game against a team backed by a wall of noise.
“It showed the team spirit we have,” he said. “We’re all friends, we’ll go out and celebrate this win together and look forward to future games.
“We have the Shield final on Sunday,” he added. “But we’ll have one eye on the Aviva. We haven’t come all this way to let Sheriff have it all their own way. We’ll be going there to win.”
Winning the semi-final has given Evergreen the chance to bridge a 33-gap since the team’s first appearance in an FAI Junior Cup final. The game wasn’t pretty at times, but Drennan reckoned the team did what they had to get through.
“We might not play well at times, but we grind out results,” he said. “We keep grinding them out, which is a sign of a good team.
“I thought we played well in the first half when we moved the ball around,” he continued. “Why we stopped doing it, I don’t know, but I’m delighted that we’ve reached the final in the Aviva. That’s what dreams are made of.”
And Drennan helped to achieve the dream when he drew Evergreen level with a great second half goal.
“I could see it all happening,” he said of the move that led to his 70th minute equaliser. “I could feel what was going to happen. It was one of those long throw-ins that everyone is going to miss and it’s going to fall into your path. I was happy enough that I slotted it home.”
The goal was greeted with incredible scenes of celebration from his team-mates and supporters alike, but Drennan already knew the value of the goal.
“You could see what it meant to everyone,” he said. “At half-time Niall Andrews gave an incredible speech to the team. He’s been at the club for so many years, then you have people like Mick Hennessy, Peter Hennebry and Shane Daly, the guys behind the scenes - the goal meant as much to them as it did the players.”
The way the team celebrated the goal, as a unit huddled in a corner, showed the collective spirit this group has fostered.
“When you see people crying after a goal - I was even crying myself! - it shows you what it means to a club,” he said with a smile. “I’ve played in finals with Aston Villa, achieved things with Shamrock Rovers and Ireland, but I’ve never done anything like this before. This means so much more to me.”