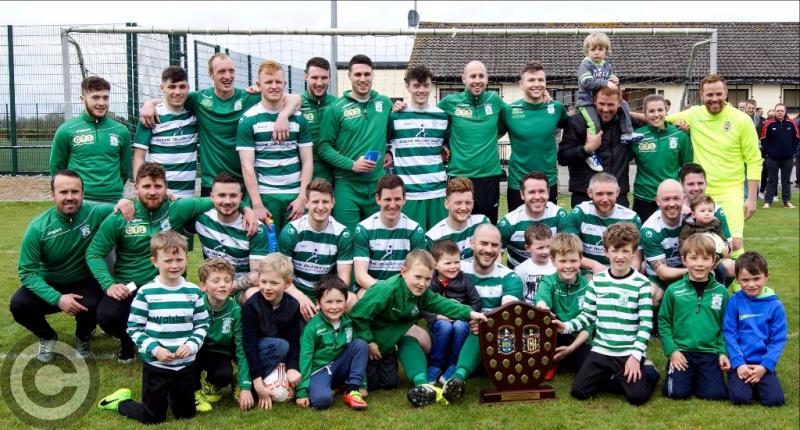 The Evergreen A players make it a family affair as they celebrate winning the Maher Shield.

As far as Easter Sundays go, Evergreen A got eggs-actly what they were looking for – the Maher Shield title!
The city side made sure the Shield stayed on the Kells Road for another season after they coolly dealt with Fort Rangers at Derdimus.
The weather may have been dull but Evergreen’s performance was anything but. A week after their FAI Junior Cup semi-final win Packie Holden’s side buzzed about the pitch, fizzing passes this way and that as they frustrated Fort at every turn.
The performance from the winners was something to be admired, as they took the main threats Rangers possessed and shut them out of the game.
A solid defence, coupled with a composed midfield, paved the way to victory, boosted only by a lethal attack which quickly sprang into life.
They gave a sign of what type of mood they were in when they took just 16 minutes to break the deadlock. Chris Whearty did the damage, slicing Fort open with a clever pass for Mikey Drennan to run on to.
The striker held his shot, waiting for goalkeeper Jim Nugent to make his move, before slotting the ball into the bottom right corner of the net.
The goal summed up the positive start made by Evergreen, who dictated the pace and flow of the game from the off. Right from kick-off they kept the game away from Eddie Nugent, a catalyst for most of Rangers’ good moves, forcing Fort to try and angle long diagonal drives forward.
With Rangers chasing the ball this way and that, the central channels were there for Evergreen to exploit. They gave an indication of what that would bring as early as the ninth minute, when Declan McQuillan deftly took down Tommy Earls’ long pass and teed up Drennan in front of the box. He worked the ball around, waiting for space to open, before clipping off a low shot which had Nugent scrambling to his left to flick out for a corner.
Once they took the lead, Evergreen seemed determined to kick on even further. There was no sitting on their advantage, as Niall Andrews proved when storming forward to get on the end of McQuillan’s swirling 20th minute corner, but John Cahill was in the right place to head the ball clear off the line.
Evergreen were making things work in midfield, with Brian Jordan and Dean Cornally blending well. The duo kept things ticking over, mixing tough tackling with short snappy passes that kept Fort chasing possession.
Evergreen kept looking for ways to add to their lead, pushing Fort back with quick moves down both wings. The best chance came when Sean Barcoe used his strength to hold possession up in the corner before digging out a teasing 35th minute cross. Cornally made the break from midfield, timing his run to meet the delivery bang on, but he couldn’t keep his header on target.
Fort had been under the cosh, but thought they had survived the worst of the storm as half-time loomed. However, with seven minutes to go until the break, they cracked under the pressure.
Once more Andrews came up from the back to lend his support to the attack for a McQuillan corner. Once more he got his head to the ball, meeting it with a looping header, but this time the ball had too much pace, despite the best efforts of Cahill, and flew into the net. 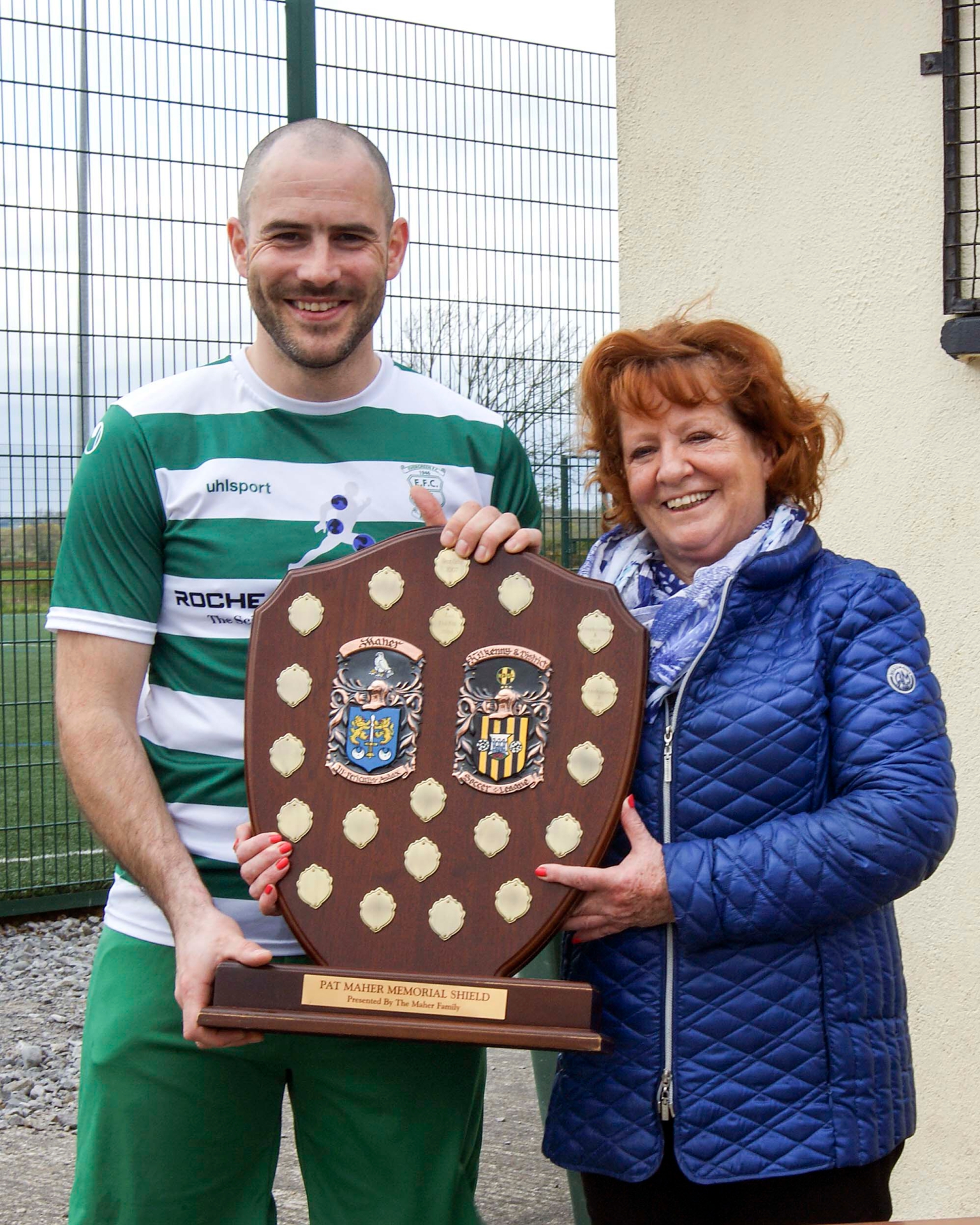 Fort had endured a frustrating first half, but nearly forced their way back into the game before the break. A wayward Chris Whearty pass was seized upon by Kenny Morris, who saw a chance to trouble Packie Holden from distance. Morris delivered a fine strike, but Holden watched it all the way before comfortably getting his hand up to make the save.
That was as close as Fort came to getting on the scoresheet in the opening 45 minutes – but it wasn’t as close as Evergreen went to extending their lead before the break. Sean Barcoe had a great chance to make it 3-0 when he watched Tommy Earls fizz in a diagonal cross. Keeping his eye on the ball Barcoe delivered a solid half-volley, but his shot crashed the wrong side of the target.
The break came at the right time for Fort, who used half-time to reset their tactics. Unfortunately for them, Evergreen had other ideas and quickly took an even tighter grip on things.
The new half was little more than 30 seconds old when Evergreen struck again. Much like the opening goal, Chris Whearty did the damage again, dropping into the centre of midfield to take possession before delivering an excellent ball to the outside left.
Full-back Sam Hickey was on it in a flash, dashing from his defensive position to pick up possession. The teenager showed great strength to hold off his marker, and greater finishing as he cut in to curl a low drive inside the far right post.
Fort were down, but they weren’t out. Rangers were given a glimmer of hope when they launched an attack and pulled a goal back 10 minutes into the second half. Liam Forristal was in the right place at the right time to pounce and stab the ball home from close range after John Comerford’s header broke free on the edge of the six-yard box.
Fort tried hard to build on that goal, which gave them a surge in confidence. They went to three at the back and five in midfield as they sought to force more play forward, but Evergreen went back to working the ball around and cooling their opponents’ enthusiasm.
Playing the patient game gave Evergreen time to pick spaces they could exploit. That led to chances, but they couldn’t add to their lead. Mikey Drennan saw his glancing header finish wide of the mark, while Whearty sent a searing 68th minute volley sizzling over the Fort crossbar.
They retrained their sights and took a big step towards retaining their title with a fourth goal 20 minutes from time. Seizing on the ball Drennan released sub Jamie Owens with a telling pass. Owens kept his cool, looking up to pick his spot with a low shot just beyond Jim Nugent’s right hand.
That was as good as the final blow for Fort, but Evergreen had one last shot up their sleeve. Chris Whearty capped a memorable day for the boys from the Kells Road, and in some style, after he was fouled on the left of the box.
Whearty stood over the free and delivered an absolute belter, curling the ball over the wall and into the top left corner of the net – a fantastic way to seal a Shield success.
Evergreen A: Packie Holden; Sam Hickey, Niall Andrews, Oisin Corr, Tommy Earls; Chris Whearty, Dean Cornally (Conor English, 79 mins), Brian Jordan, Declan McQuillan (Peter Henebry jnr, 67 mins); Sean Barcoe (Jamie Owens, 52 mins), Mikey Drennan.
Fort Rangers: Jim Nugent snr; Conor O’Grady, Roy Cullen (Padraig Murphy, 79 mins), John Comerford, John Cahill (John Bambrick, 50 mins); David Forristal, Liam Forristal, Conor Bergin, Stephen McKenna (Robbie McCarthy, 82 mins); Kenny Morris (Jim Nugent jnr, 82 mins), Eddie Nugent.
Referee: Tristan Eardley. Assistants: Lee Kill, Jim Bowes.