Gap is closing at the top of Kilkenny's Premier Division 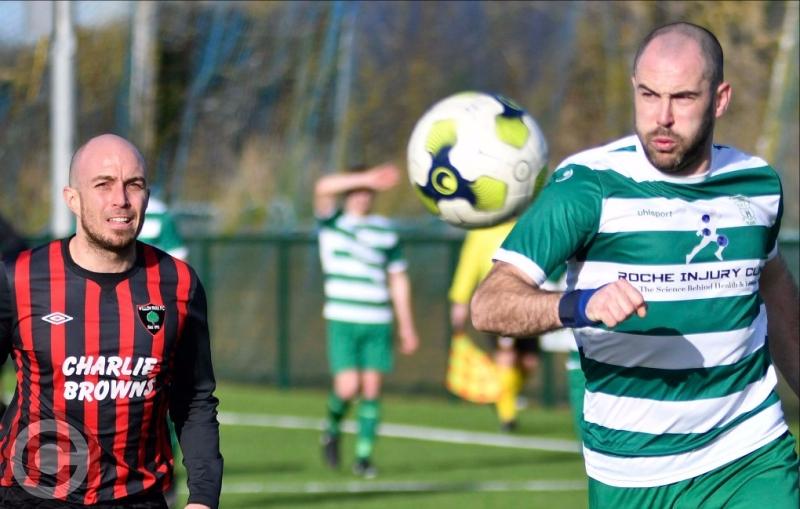 Niall Andrews was on target for Evergreen A as they closed the gap on league leaders Freebooters A. Photo: Michael Brophy

League and Cup titles were up for grabs as the Kilkenny & District League’s junior season kicked up the pace at the weekend.

Evergreen A have been riding on the crest of a wave lately, going on a run which may yet see them challenge for another title. A week after retaining the Maher Shield they strengthened their cause to hold on to even more silverware as two wins in five days saw them close to within three points of Premier Division leaders Freebooters A.

The city side had three games in hand on their cross-town rivals and did well to record two wins from two. They started their run on Wednesday evening, beating Callan United A 3-0 on the Kells Road.

A first half goal from Conor English sent them on their way. They doubled their lead on the hour through Peter Henebry junior, then sealed the win with a 90th minute strike from skipper Niall Andrews.

They kept up their goal hunger on Sunday morning, hitting four to beat Stoneyford United. An early Daragh Walshe goal gave the home side the lead, an advantage they doubled when Dylan Whearty scored a 44th minute goal from his own half!

The hosts kept up a good rhythm in the second half, going 3-0 up through Lee Delaney. Conor Coffey pulled one back for Stoney’ soon after, but Brian Jordan’s 73rd minute effort restored their three-goal cushion and move to within three points of Freebooters A with a game in hand.

It proved to be a good weekend for Evergreen’s top flight clubs. Gary Owens’ B team made the short trip to the Fair Green a worthwhile one as two Cian Morton goals saw them beat Freebooters B 2-1 to take their recent run to three draws and two wins in their last five league outings.

While most of the Division One drama was concentrated on the top of the table clash between Deen Celtic A and Highview Athletic A, there was still room for some twists and turns at the other end.

Newpark started the drama when they travelled to Goresbridge on Wednesday and beat Bridge United 2-1 to record only their second league win of the season (and first since beating the Lions 3-2 on October 9).

The scoreline brought disastrous results for Bridge United, who will be relegated to Division Two after Thomastown United B were given a walkover by Lions A on Sunday morning, enough to see them leapfrog both Newpark and Bridge.

In another twist, one of two teams will join Bridge in Division Two. Newpark or Thomastown could yet be relegated - they will face each other in the last of their league games!

The chase is also on for Cup titles, with the finalists for both the Division Two and Three Cups decided.

In Division Two Evergreen C kept their hopes of a League and Cup double on track when they beat St Ann’s in the semi-final on Sunday. Fittingly, it was a goal from the evergreen Seamie Cummins which did the trick for Conor O’Neill’s side, who will take on Brookville in the Ken & Michael Byrne Memorial Cup final at Derdimus on Sunday (kick-off 12 noon).

Ormonde Villa, who have secured promotion from Division Three, maintained their hopes of going up with some silverware in tow when they beat Deen Celtic B 4-1 in their Cup semi-final on Sunday. Goals from Kieran Banville, Frank Nolan, Karl Gleeson and Aidan Nolan saw them go through to this Sunday’s decider. Villa will take on Thomastown United C in the final after the Grennan men beat Evergreen 46 2-1 in their semi-final. Stevie Wemyss and Rory Monks grabbed the goals that sent their side into Sunday’s big game at Derdimus, which kicks-off at 2.30pm.

Elsewhere the draw was made for the quarter-finals of the McCalmont Cup.

Two of the last eight games will be played this weekend. Champions Thomastown United A will be hoping to make it a club double when they face Evergreen 46 on the Kells Road on Saturday evening, while Freebooters A play host to Deen Celtic A on Sunday morning.

The remaining ties saw Bridge United drawn at home to Evergreen A, while Highview Athletic A were paired with Stoneyford United.