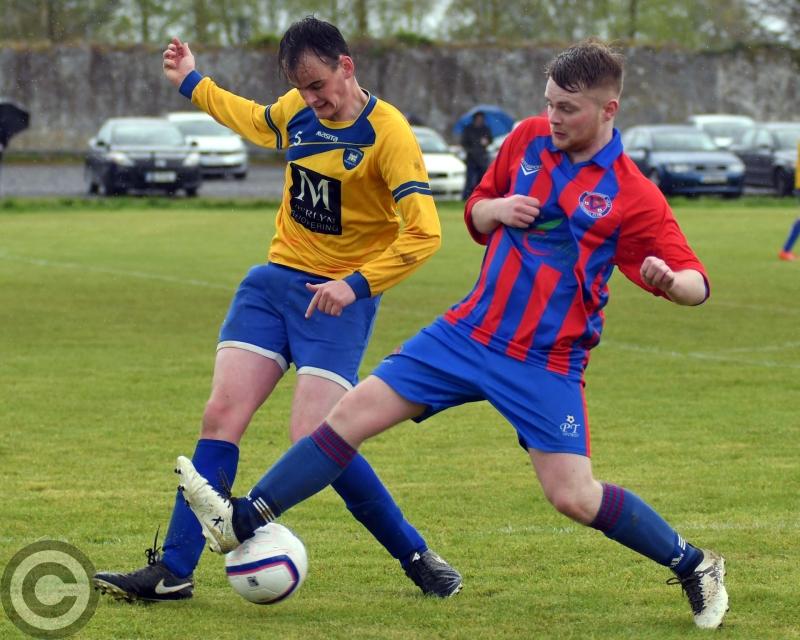 Karl Gleeson (Ormonde Villa) stretches to keep control of the ball as Mikey Murphy (Thomastown United C) moves in to challenge for possession during the Division Three Cup final at Derdimus.

A moment of magic helped a fast-flowing Ormonde Villa bring a silver finish to their season.
Aidan Nolan was the provider, conjuring up a scintillating goal that helped the city side finish off Thomastown United C and land the Division Three Cup title.
Although already a goal to the good Villa had just started to look over their shoulder as Thomastown started to find some attacking form.
That all changed when, with 20 minutes to go, Nolan took centre stage. Moving out from attack he latched on to Gary Bryan’s low pass, spinning the ball around his marker with a flick of his foot.
That was only half of the move. With the ball going one way around the defender Nolan went the other, running around his man to collect the ball before coolly slipping it inside the far post. It was a goal good enough to seal any Cup title!
Villa had been just as sharp from the off, taking just three minutes to turn the game their way in Derdimus. Karl Gleeson and Aidan Nolan teamed up well, Nolan twisting this way and that before firing in a cross from the right.
Thomastown goalkeeper Calvin Brophy did well to punch the ball away, but couldn’t stop Frank Nolan from seizing on the loose ball and cracking a half-volley that flew into the net. 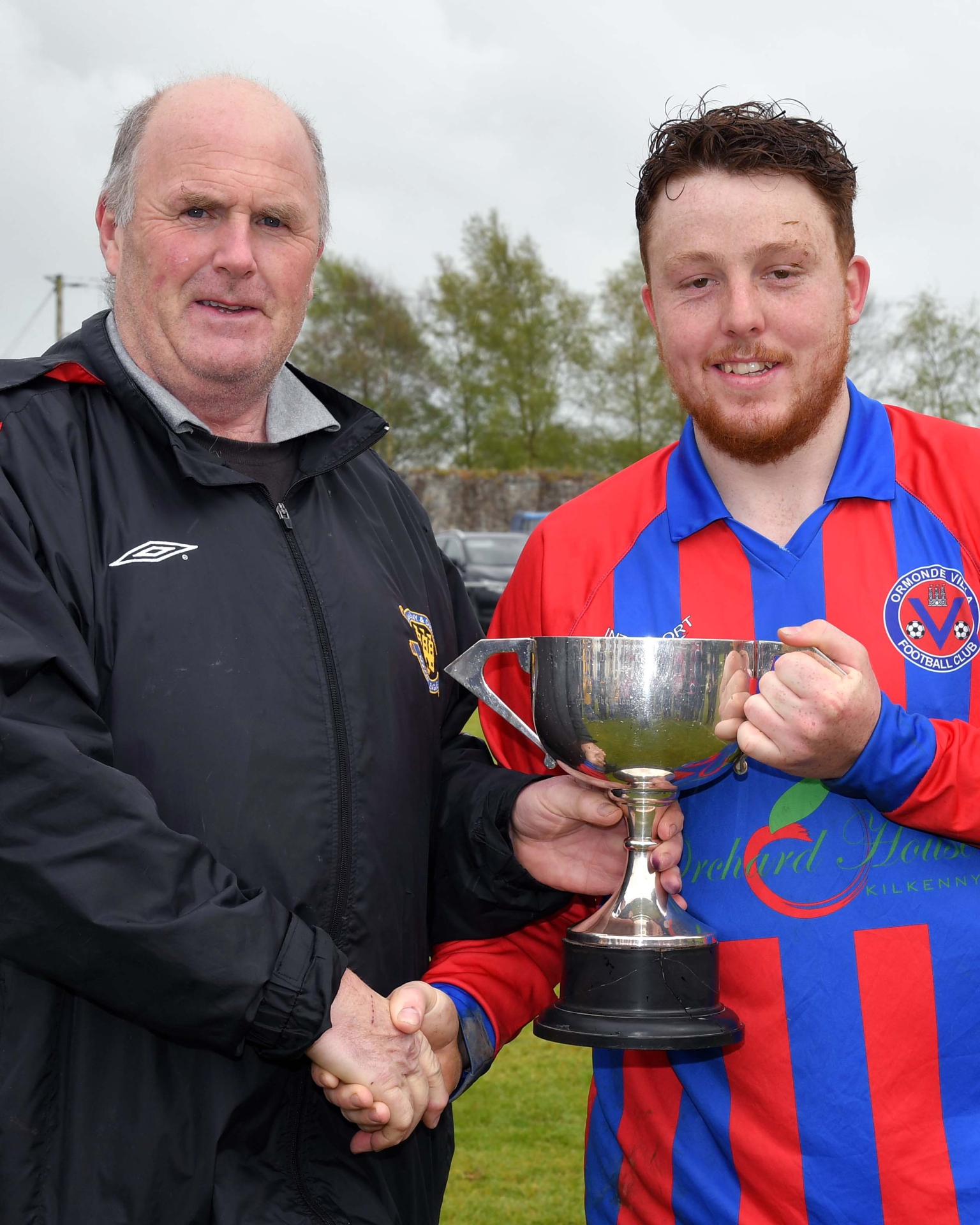 Thomastown were no slouches in attack themselves; within minutes they fashioned a great chance to draw level after Mark Walshe made space on the edge of the box with a clever turn, but he curled his seventh minute shot just wide of the left post.
Forced to chase the game after conceding that early goal United pushed on in an effort to get back into the game.
Ollie Weekes went close when he got his head to Jamie Lanigan’s curling free-kick midway through the half but saw his effort deflect off a Villa defender and go behind for a corner.
The city side were under the cosh for a spell, with midfielders Peter Vickery and Aaron McDonald battling well throughout, but lifted the siege with a breakaway move that almost yielded a second goal.
They turned defence into attack when Kieran Banville dispossessed Mark Walshe and sprinted forward.
Karl Gleeson was on the ball in a flash, jinking his way down the left before turning inside and unleashing a stinging drive, but his shot flashed just high and wide of the top right corner.
Villa finished the half the stronger side, but for all their efforts they couldn’t add to their lead. Liam Walsh went closest, racing into the centre to meet Frank Nolan’s 40th minute cross.
Walsh did well to get through a cluster of players and meet the delivery, but he couldn’t guide his header inside the far post.
Ormonde Villa continued in the same attacking vein after the restart, driving on in search of more goals.
They were first to threaten in the second half, Frank Nolan going close when he got on the end of Karl Gleeson’s 51st minute cross, but he couldn’t keep his volley on target.
They kept pressing on, forcing Thomastown into serious defensive action. Gleeson caused panic with another cross, one which was destined for Walsh’s head, but Shane Molloy made a superb clearing header to stop the attack.
Deft Touch
Walsh was involved again soon after, showing a deft touch to kill Kevin Rowe’s booming kick-out and cut into the box, but Calvin Brophy did well to stop the shot.
Thomastown had resisted a lot of pressure, but finally cracked when Aidan Nolan bagged that special second goal for Villa. The city side weren’t content to sit on a 2-0 lead and went looking for more goals.
Gary Bryan almost made it 3-0 when he latched on to Nolan’s superb 75th minute diagonal ball and burst through on goal, but Brophy forced him wide of the target before making a good save. 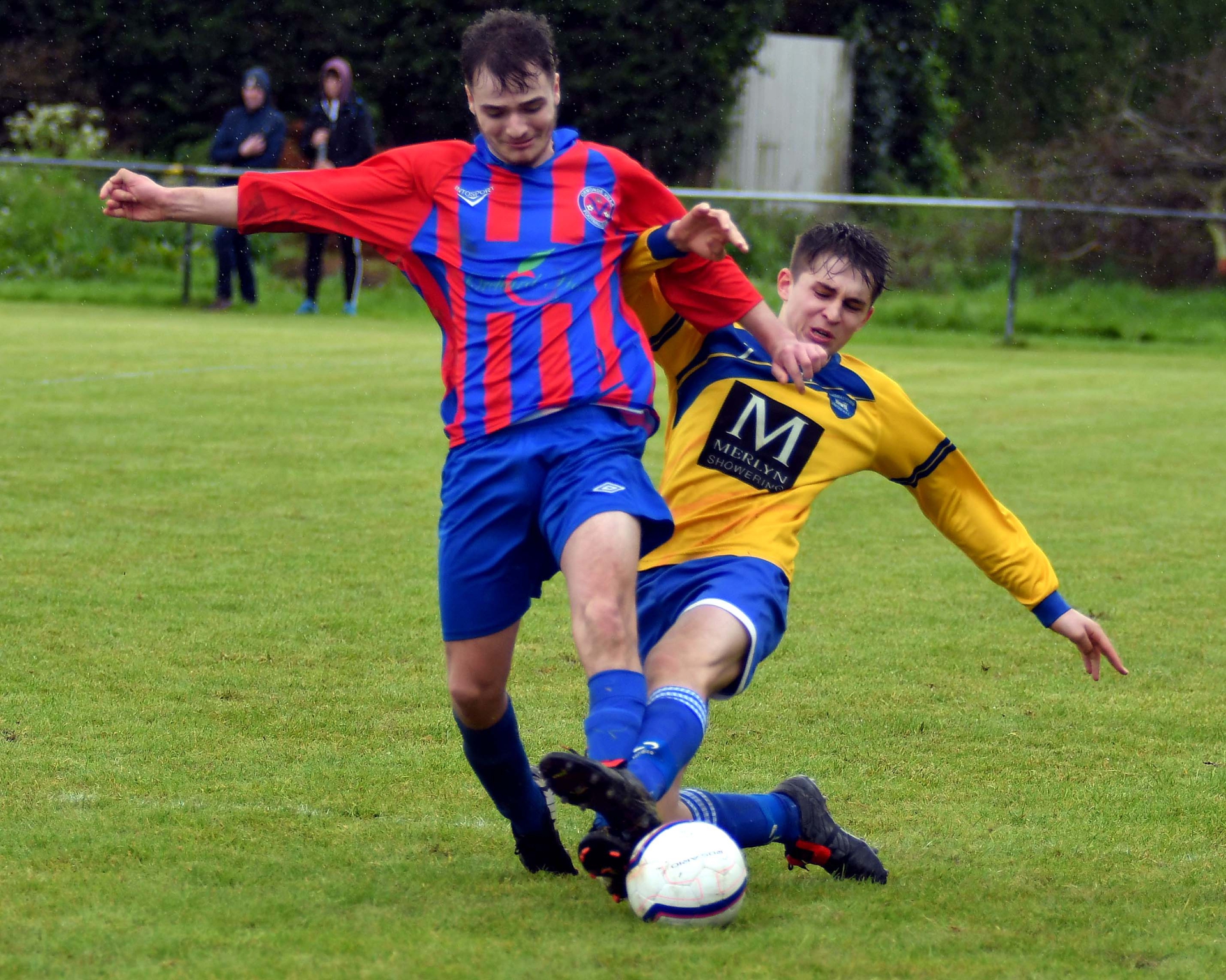 Thomastown may have been down, but they weren’t out. Their two young livewires Rory Monks and Stevie Wemyss had endured frustrating afternoons – Monks was well by the Villa defence every time he threatened to break through while Wemyss had his hands full in a midfield battle – but linked up to create a scoring chance 12 minutes from time.
Monks did the initial work, holding play up and making space as he twisted this way and that on the edge of the box.
A clever ball back was seized upon by Wemyss, who took one step before unleashing a piledriver, but much to Villa’s relief his shot clipped the top of the bar.
That was as close as United came to scaring Villa though, who saw out the remaining minutes. Having already secured promotion, they now had some silverware to show for their hard work.
Ormonde Villa: Kevin Rowe; Jamie Cahill, Kieran Banville, Danny Driscoll, Padraig Crawford; Liam Walsh, Peter Vickery, Aaron McDonald (Michael Kenny, 46 mins), Frank Nolan (Gary Bryan, 64 mins; Adam Comerford, 81 mins); Aidan Nolan (Paul Denieffe, 90 mins), Karl Gleeson (Davy Barry, 76 mins).
Thomastown United C: Calvin Brophy; Ben Challoner, Nathan Cullen, Mikey Murphy, Richie Barcoe (Conor McDermott, 46 mins); Stevie Wemyss, Jamie Lanigan; Ollie Weekes, Mark Walshe, Shane Molloy; Vinny Joyce (Rory Monks, 24 mins).
Referee: Michael McLoughlin. Assistants: Eoin Walsh, Mitch Corrigan.