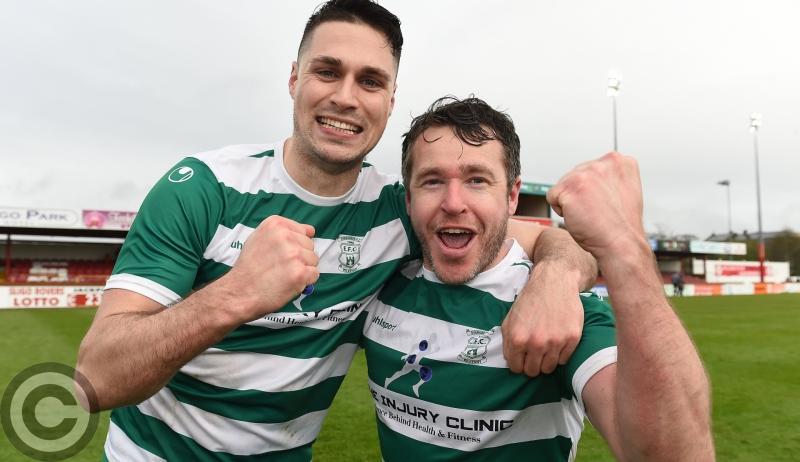 Given that he’s one of the longest-serving members of the squad there’s little that Brian Jordan hasn’t seen on a soccer pitch. However, the Evergreen veteran believes the current crop have brought a freshness to the Kells Road that hasn’t be there before.

“It’s wonderful to be out here on the eve of an FAI Junior Cup final,” he said before preparing for training on a balmy Spring evening. “The spirit in the camp is like nothing I’ve experienced before.

“I’ve played junior football with Evergreen since I was 17, played in some fantastic squads, but as far as I’m concerned this is the best in terms of ability, attitude and workrate,” he added. “They are a fantastic bunch.”

The harmony in Packie Holden’s side is apparent - while talking to Jordan you can hear the players laugh and joke as they step out on the pitch for training.

“It’s difficult to put your finger on what sets this side apart from the rest, but as a group we get on very well together,” he said. “We blend well together; a lot of the older, more experienced guys have taken the younger players under their wing and brought them along. There’s no divide there; we’re all friends and get on well, which makes this easy - you don’t have to work hard at fostering a spirit.”

That spirit relates to the time when Jordan cut his teeth at junior level. Older players helped him when starting out.

“When I came into the squad players like Ollie Walsh were a big help,” he said. “I would have played up front with Ollie and he was fantastic.

“A great player, he was so experienced with unbelievable ability. He brought me through pretty much everything the first year or two I was there.

“You can see with the guys coming in now - there are three or four who are 18 - it’s wonderful to see,” he added. “I can relate back to when I first started, and the buzz that came with being part of such a brilliant squad. When I started off I was just happy being on the bench with Evergreen, let alone playing. It’s great to see that again.”

Jordan was there when Evergreen last reached the Cup semi-final, but a move to Kilkenny City meant he had left before that ’99 loss to Ballymun. Missing the game was something of a regret.

“The year I left for Kilkenny City was the year Evergreen got to the FAI Junior Cup semi-final (that was in 1999, when Ballymun beat them 1-0 in Arklow),” he recalled. “I didn’t appreciate the enormity of the competition at the time; it’s only now that I realise the regret I had at missing out on that game as I firmly believe we could have done something had I stayed. It’s been something of a regret that I didn’t stay, but this final is a chance to put it right.”

Given all the teams he has played on, it was something of a surprise that the 1999 team were the last Kilkenny side to get so far in the Cup.

“The fact that we haven’t made it this far since then is surprising,” he agreed. “Between last year and this year it’s the best squad we’ve had. That 1999 squad was superb, but I think this group just about trumps it in terms of the ability throughout.”

Losing the Leinster Junior Cup was a massive disappointment last season, but even in defeat the seeds were sown for this FAI Cup adventure.

“Packie and Brian (Holden) have planted that ambition in the squad,” he said. “Perhaps we were lacking a little tactically and mentally over the years. That’s not to take anything away from previous managers - they brought us on a bit further but the two lads have advanced up that little step further that we needed to compete at the highest level.”

That has been highlighted in the manner Evergreen have progressed through the nine rounds of the Cup this season. The quarter-final with Kilmallock was a prime example, Evergreen sustaining a prolonged spell of pressure before a breakaway counter-attack saw Mikey Drennan score the only goal of the game.

“We’ve gotten better at game management,” Jordan said. “The experience in the spine of the team, starting with Packie in goal and Niall Andrews in defence, has helped. We also have Sean Barcoe there while Mikey has played professionally in England. We know how to see out games when we’re winning, while we don’t panic if we go behind.”

Evergreen are not just experienced individually, but collectively. A lot of these players have soldiered together for many seasons.

“We’re going a long time,” he said with a smile. “I’ve played in teams with the likes of Jamie Owens and Niall for a long time and started off with Packie in the junior squads when I was 17.

“It’s great to be at this stage with these guys, who have put so much into it. It’s a nice reward to get this far, but it only really counts if we go on to win the game.”

With the build-up ever-growing, making the final has seen a real buzz envelop Evergreen Park.

“You could see what it meant to the club after the final whistle in Sligo,” he said. “There were guys in tears, grown men who are tough guys but who were so happy to be there. To see the club advance so much both on and off the pitch it’s fantastic for them as they’ve put so much work in behind the scenes.

“We probably don’t appreciate that enough,” he finished. “Without them, we wouldn’t have these wonderful facilities.”