Sheriff will look to experience for Cup edge 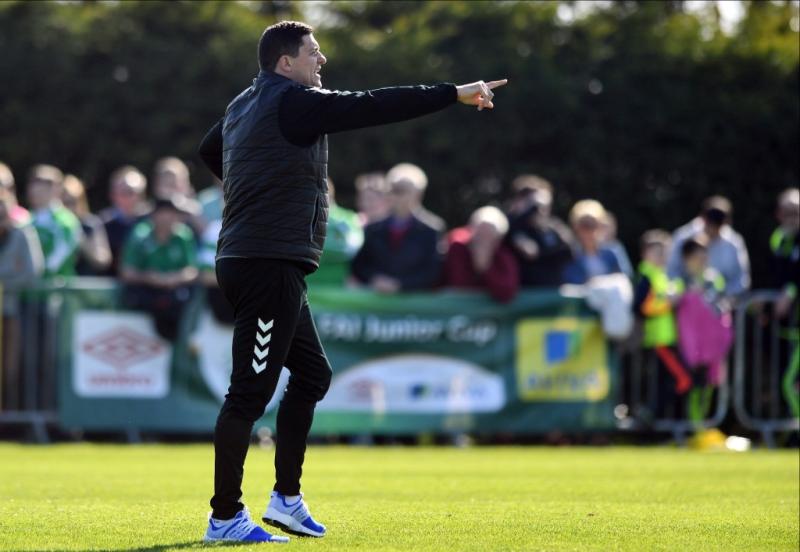 They’re arguably the most successful junior soccer club in the country at present - a case of been there, done that - but even Sheriff manager Alan Reilly admits the prospect of walking out at the Aviva Stadium on May 13 is still a thrill.

“The stadium takes your breath away every time you come here,” he said. “We’re looking forward to the game.”

Defending Cup champions Sheriff may well be used to the big day, but it’s always a special occasion.

“When you look at a competition that starts with 600-odd teams back in September and you get down to the final two it’s definitely special,” he said. “Everything, from the stadium to the opposition, even getting out on to that pitch - as a player you’re itching to get out there.

“There’s a nervous energy before the game, as you’re trying to prepare for it, but you have to look back on previous experiences, use that to try and settle yourself,” the manager added. “The lads will be relishing the chance to get back out there and play.”

For Sheriff it’s a third Junior Cup final in six years. For Evergreen, it’s their first in 33. However, Reilly doesn’t for one second think his side have the advantage.

“You can turn around and say that it’s more than 30 years since Evergreen have been here, but when we made the final six years ago it was our first,” he said. “Experienced or not, that pitch will take your breath away when you walk out onto it. It’s how you deal with it, how you approach the day that will tell. You’ll forget the nerves when that whistle blows. Our players have sampled that before, but this final still has the hype and build-up behind it. As long as they deal with that, concentrate on the game, they should be alright.”

Sheriff have been on a golden run of success in the last number of years, but as far as Reilly is concerned there’s no magic formula when it comes to keeping his players fresh and hungry for more success.

“That’s down to the individual,” he said of the attitude that saw Sheriff win five Cups last season, and helped them also reach the Leinster Junior Cup final again this term. “You can only do so much with the players.

“You can prepare them to play a certain way and to prepare for their next opponent, but we only have them for a couple of hours twice a week. You’re not talking to them 24/7 - it’s how each person in the squad deals with things themselves.

“They are experienced, they have been here before,” he added. “I’m sure that on the day they’ll be level-headed, but there’ll be those nerves as they get ready to go again.”

Sheriff have had their work cut out making the final this year, coming through a number of tough tests. They won a seven-goal thriller against Collinstown, needed extra-time to see off Carew Park while were forced to endure two penalty shoot-outs along the way, including the semi-final against Killarney Celtic.

“It wouldn’t be us without a penalty shoot-out,” Reilly said with a smile. “One of the toughest ties was the game in Killarney. It was a game of two halves; the first we didn’t really come out while in the second we dominated.

“The game went to penalties, but the calibre of (goalkeeper) Lee Murphy saw him do what he does and get us through (he saved two spot kicks and scored one). We also had Peake Villa on the road, Collinstown too. There’s been some tough games along the way, but thankfully we came out the right side.”

That game in Killarney saw Sheriff silence a large home crowd with that penalty shoot-out win.

“The lads aren’t fazed by noise, but in terms of crowd it was probably 2,500 supporters against 10!” he said. “When we scored our penalties you could hear a pin drop - when they scored you’d have heard their supporters 10 miles down the road!

“Playing the game in Killarney, with all the noise, was a test but the lads stayed focused,” Reilly added. “They knew what they wanted to do. Credit to our lads they came out with the result.”

And Reilly knows Sheriff will have to be at their best to tackle Evergreen.

“Evergreen are a very good side,” he said of Saturday’s opponents. “They have youth but they also have experience there. They will be well up for the game and I know they’ll be a threat, but we’re preparing away for the game. Hopefully, come Saturday, all the whistles and bells will be polished and we’ll be ready to rock.”

Having met them in the Leinster Junior Cup final last year the Kilkenny side are not an unknown quantity for the Dubs.

“It was a tough game in Kilkenny last year,” the Sheriff boss recalled. “We played them on a real tight pitch, but this is a different ball game.

“When you walk out onto that pitch, that yard or two you have on a regular junior pitch suddenly becomes 10 or 15 yards. It can affect your thinking when you do and don’t have the ball. It can lead to crucial decision times for players.”