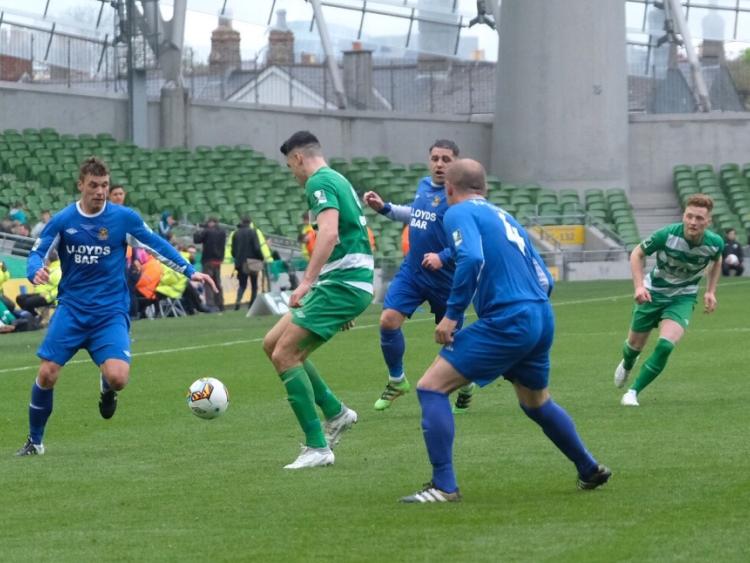 There was heartbreak in the Aviva as Sheriff YC dashed Evergreen's FAI Junior Cup hopes.
A goal in either half did the damage as the Dubliners kept a grip on their title with ruthless efficiency.
The real blow came just two minutes before half-time, when Stephen Murphy curled a low free-kick inside Packie Holden's left hand post.
The goal had been coming, as Sheriff had been growing in confidence. The Dubliners dictated the pace for a lot of the first half, using the vast pitch as they pushed for openings. They had some good chances, Paul Murphy firing a 24th minute shot straight at Holden while John Rock brought a good save from the netminder after the half hour.
Evergreen had some chances of their own, but couldn't make them count. The best fell to Chris Whearty, who cut in from the left to unleash a stinging 35th minute drive, but Sheriff goalkeeper Lee Murphy beat his shot away.
Sheriff finished the half the stronger side, and thought they had taken the lead when Rock nipped in to get on the end of Mark Higgins' low 43rd minute cross. Holden made a superb instinctive save but the Kilkenny defence couldn't their lines, conceding the free from which Murphy struck.
Try as they might, Evergreen couldn't get back into the game in the second half. Dylan Whearty tried his luck from long range, while Mikey Drennan saw his 70th minute shot flash wide.
Sheriff played a defensive game in the second half, shutting Evergreen out, but a late counter-attack saw them seal the spoils. Skipper Paul Murphy confirmed their status as champions when he raced on to Darren Dunne's pass and rammed home an unstoppable shot three minutes from time.