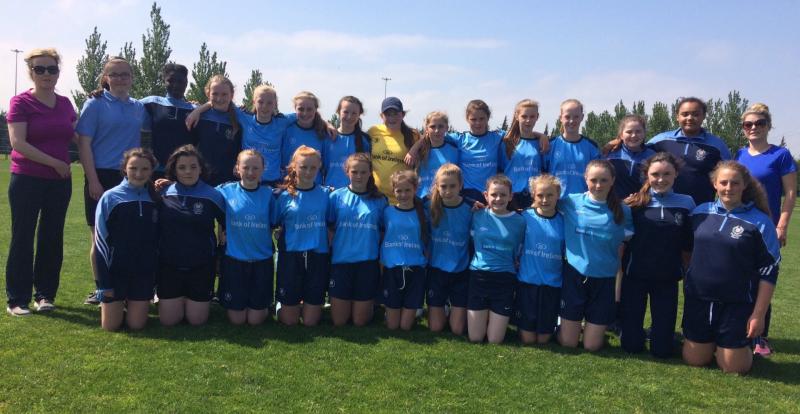 A fantastic soccer season ended with more glory for the Pres Kilkenny as they lifted the FAI First Year Girls National Cup.
Two goals before half-time saw the Kilkenny girls come from behind to beat Scoil Mhuire Buncrana at the AUL grounds in Clonshaugh.
After an entertaining start the Donegal girls hit the front when Aoife Gallanagh steered them into a 21st minute lead after some good work from Emma Doherty.
The advantage was shortlived, as the Pres powered their way back onto level terms within seconds. Ellen Molloy did the damage, following up on her four goals in the semi-final when she lashed home the equaliser right from the kick-off.
Scoil Mhuire were stung by that goal, but almost restored their lead soon after. Emma Doherty gave the Cats a fright when she unleashed a stinging shot from the edge of the box, but the Kilkenny girls were relieved to see the ball hammer back off the bar.
The Pres stepped up the pace and scored what proved to be the winner with 28 minutes on the clock. Scoil Mhuire survived when Molly Boyd saved an Ellen Molloy free-kick, but Kate Furlong pounced to tap in the rebound.
The second half was a tense affair as Scoil Mhuire chased an equaliser, but the Pres showed a different side to their game. They held their rivals at bay until the final whistle, which brought more silverware and celebrations for the school.