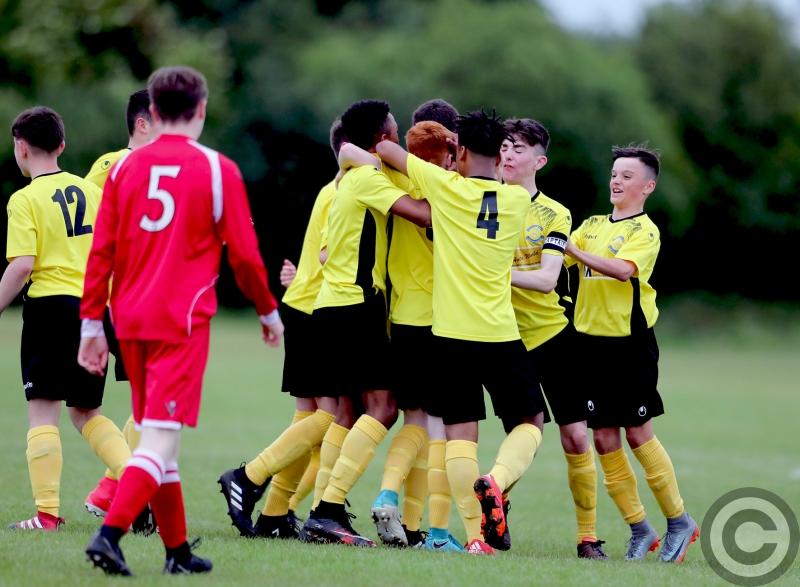 Members of the 2017 Kilkenny Kennedy Cup team could be in National League action next season as part of Carlow Kilkenny FC PICTURE: KEITH WISEMAN

A national future for the local game was announced after the Kilkenny & District League unveiled plans for a new team.

After hosting several meetings over the last few months, a new local team – Carlow Kilkenny FC – has submitted a proposal to join the FAI under-15 National League.

Details of the move, which would see the return of a local side to the national game, were announced at the League’s annual meeting.

Should the team get the green light from the FAI, they will enter the competition in time for the start of the 2018 season that March.

“In the last few years we have been haemorrhaging players to other teams,” said Darren Murray, the FAI’s RDO for Kilkenny.

“Clubs are not catering for football at an elite level and some fantastic players have gone.

“This is a chance for us to have a team of our own,” he added. “It’s a team everyone should be passionate about and should support and encourage.”

The first team to enter the league will be made up of players who represented their leagues at this year’s Kennedy Cup.

Murray, together with his Carlow counterpart Garry Coady, used the tournament to talk to parents of players about the team and what it would entail.

While the team will not face competitive action until March, the groundwork has already begun. A committee has been formed between the Carlow and Kilkenny leagues.

Technical staff positions, including roles for coaches, a performance analyst, recruitment officer as well as a physio and nutritionist, have yet to be filled.

While the FAI will hold a short under-15 season this year, the decision was made to hold off participating until next year. “We don’t want to make this a rush job,” said Murray by way of explanation, detailing the work that will go into getting the team off the ground.

It is believed that the team will cost in the region of €16,000 to €20,000 to run the side successfully, with both leagues tasked with finding local businesses to help support the venture.

It is expected that home matches would be halved between Kilkenny and Carlow. Training sessions will also be divided between venues in both counties, with an extra strength and conditioning training session to be held at IT Carlow.

The onfield work begins in August, when the first of two trial days in held in Derdimus. The team will gather for preseason training from December, with registration to be held in January 2018.

Player recruitment will be made up largely from Carlow and Kilkenny but the net may be cast further afield.

“First and foremost, this team is for Carlow and Kilkenny,” said Murray, “but with no national league teams in Tipperary, Laois and Kildare we won’t discriminate against players from those counties who wish to try out. We are entering this league to compete – and we want to do well.”

With the National League to be divided into North and South groups Carlow Kilkenny could be competing against teams from Cork City, Wexford FC and Waterford FC, as well as some Dublin clubs, with games running from March to October 2018.

And the success of the under-15 team could see the leagues form teams at other age levels. In 2019 the under-15s will move into the under-17 league, while it is hoped that an under-13 team will sign up for their National League, which launches in 2020.