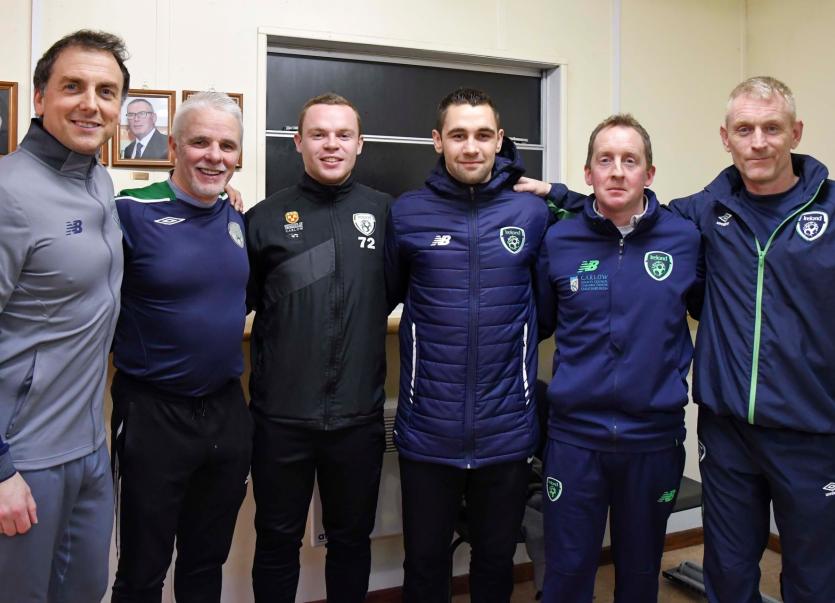 A new season of National League soccer is just around the corner, and Carlow Kilkenny FC are raring to go!
The newest team in the South-East kicked things off ahead of the 2018 campaign with their official launch last night (Tuesday).

The club, who will compete in the SSE Airtricity League Under-15 National League, unveiled their management team in Derdimus, the Kilkenny & District League’s ground and main venue for their home games.

Leading the way will be Mark Ross, who brings League of Ireland experience from his time working as a first team coach with Shane Keegan at Wexford Youths. Joining him are Eddie Doyle (assistant manager) and coaches Ethan O’Neill, Daniel Molloy and Gavin Dowling.

“League of Ireland isn’t new to Kilkenny, but an underage side is,” the manager said. “Being involved in something from the beginning is a once in a lifetime chance. It’s quite exciting to be asked to get on board.”

The team, which will be made up of players from Carlow, Kilkenny, Tipperary and the Midlands, will play in the Southern section of the League. They will take on the Kerry League, Cork City, Cobh Ramblers, Waterford FC, Wexford FC, Limerick and Galway United.

In a link to their local roots the team will wear a green and yellow home kit and red and black away kit, a mixture of the Carlow and Kilkenny colours.

A lot of work has been undertaken to bring a local team into the national game, with player development at the core of the mission.

“A lot of work has gone on in the background to make this happen,” said Garry Coady, the FAI’s regional development officer with Carlow. “Working with Darren Murray (the FAI’s RDO for Kilkenny) we knew we had to make this move to provide a pathway for local players to get into the national game or that we could risk losing them from the game.”

The National League will be played in a straightforward format of home and away fixtures. Once all league games are played the teams will be divided into four playoff sections, with league, cup, shield and plate competitions to be played. The local side will play their home games at Derdimus but are also looking at the option of having a Carlow venue for some matches also.

The team will have a test night in IT Carlow at the end of January, with training starting shortly afterwards. With games expected to begin on the weekend of March 24 and 25 the team will have an eight-week preseason cycle before starting their campaign.

That work will see the squad team up with IT Carlow to deliver a comprehensive training programme designed to help the side cope with the rigours of the national game.

Carlow Kilkenny FC will quickly learn where they will start their season. The new Under-15 National League fixtures are expected to be announced within the coming days.