Soccer: Plenty to play for in Kilkenny & District League 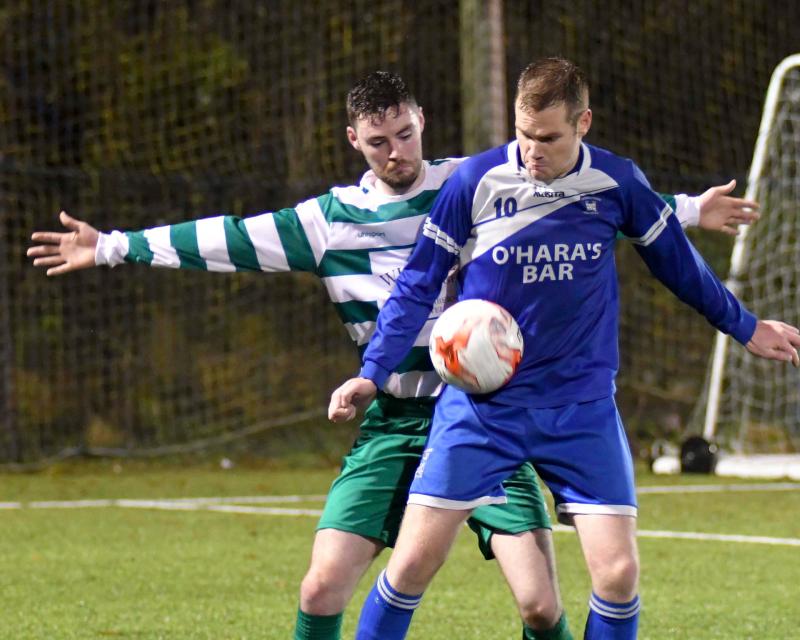 Steven Connolly's goals have helped Thomastown United A march to the top of the Premier Division table PICTURE: MICHAEL BROPHY

Storm Emma may have scuppered last weekend’s national sporting calendar, but the action is only heating up in the Kilkenny & District League.

With all four of the local junior leagues still in the melting pot, a review of the competitions shows there is still plenty to play for across all formats.

The top flight is first into focus, with three teams vying for the Premier Division title. Leading the way are Thomastown United, but Evergreen A and Freebooters A are chasing hard in the race for the silverware.

United have been most impressive this season, dropping just three points in their nine games played to date. There has been no hiding their title aspirations, but they sounded a real warning when beating defending champions Evergreen 3-1 in their season opener back in September. An early Sean Brennan goal sent United on their way, and while a Sean Barcoe penalty levelled matters in the second half Thomastown kicked and took all three points thanks to a Steven Connolly volley and late strike from Bobby Joe Walsh.

That win was the springboard for an impressive run from United, but their unbeaten streak came to an end when Freebooters A beat them 2-1 on the Fair Green in January. Cian Loy made it unlucky number seven for United when his injury-time goal settled an entertaining game which looked to be heading for a draw after Dessie Walsh cancelled out Emmet Nugent’s opener for ’Booters.

Despite that loss Thomastown have recovered well, putting two wins back to back to maintain pole position. They are still looking over their shoulder, however, as Evergreen A are now fully focused on the domestic campaign and are keen to put on a title charge.

Despite the slow start in the league Gary Maher’s side have made up ground. Evergreen have scored 29 goals in their eight league games, the best of any Premier Division side, as they trail Thomastown by three points but with a game in hand. Proof of their firepower was highlighted in successive wins in December – in the space of seven days they beat Deen Celtic 7-0 and Highview Athletic 6-2.

While goals certainly win games, preventing them from going in at the other end goes a long way towards securing the right result. That’s something Freebooters A know all about. In their six league games to date ’Booters have conceded just four goals, giving them the meanest defence in all of the Kilkenny & District League.

They haven’t been shy on the scoring front either, netting 19 goals in five wins and a draw to maintain their unbeaten top-flight record – the 1-1 draw with Deen Celtic is the only ‘blip’ on their performance chart to date.

While things are tight at the top they are less so at the bottom. While Evergreen B and Highview Athletic A have had less than stellar seasons to date they remain outside of the threat of relegation. Deen Celtic A, with five points to their name, are also struggling but with Callan United yet to pick up a point after seven games and only one side to drop down to Division One they look destined for the drop.

Things are just as interesting in Division One, where Clover United A and Evergreen C are leading the way in the title run. The Rathdowney men currently have the edge over the city side as they sit top of the table with 21 points from nine games (six wins and three draws). A run of four successive wins saw United charge up the table, overtaking long-time leaders Evergreen C, but they missed the chance to put ore daylight between themselves and their nearest rivals when they were held to a 3-3 by Thomastown United B in their last league outing.

As for Evergreen C they have built steadily on their performances from last season’s Division Two campaign, from which they bagged a league and cup double. Like Clover they remain unbeaten in the league this season, but two draws in their last four games (they have had four draws this season, the second highest tally in all four junior divisions) means they have lost ground to the leaders. However, with both sides down to meet on the last day of the season, there’s still everything to play for here. Freebooters B (third with 18 points) and Fort Rangers (fourth with 18 points) make up the top four. Both have played more games than the leading pair but with three sides to go up both still have a shot at promotion.

Like the Premier Division things are a little more cut and dried at the other end of the table, where Castlewarren Celtic A and Thomastown United B have been cut adrift. Both are on five points apiece, six off Stoneyford United and Lions, the closest sides to them in the battle to beat the drop.

Bridge United are the story of Division Two as they continue to blaze a trail towards the title. A haul of 30 points from 12 games means the Goresbridge men have a five-point cushion between them and their nearest rivals Newpark.

The manner of their charge to the top is even more impressive. In nine wins and three draws they have hit the net a whopping 48 times, the most of any side in the junior leagues.

The battle to join Bridge in Division One next season is a tense affair, as Newpark and Spa United are in close contention. The city side currently lie second with 25 points from 12 games played but Spa are only two points behind, and with a game in hand. It all means a playoff could yet be called for to determine who goes up.

The race may be over for fourth-placed Ormonde Villa (20 points from 12 games) who have had a good campaign, but five draws – the most of any side in the junior divisions – means they look like staying put for another season.

Life is a lot tighter at the bottom of the table, with Paulstown 06, Brookville and Ballacolla battling to beat the drop. River Rangers aren’t fully clear either, although two wins in their last two games against Ballacolla (2-1) and Ormonde Villa (1-0) has given them a huge boost.

A healthy mix of youth and experience has helped Division Three leaders East End United prove that age is just a number. The goal scoring skills of Brian Lannon and Paul Murphy have played a big part in their rise to the top – United have scored 44 times in the league this season, a tally which is second only to Bridge United across the four junior grades. Their final two games of the league season are against Deen Celtic B and Clover United B, two teams they have already beaten this season (6-3 and 4-1 respectively). One final push and promotion will be theirs.

East End’s scoring run has helped them carve out a three-point lead at the top of the table, but second placed Freshford Town are right on their heels, and with a game in hand to boot. A remarkable turn in fortunes saw Town recover from two defeats and string together eight straight wins before a draw with Clover United B in their last game ended the run.

Evergreen 46 aren’t out of the reckoning either and sit third in the table, two points further back on Freshford but with the same number of games played. The city side catapulted their way back into the reckoning with a 9-1 win over Castlewarren Celtic B. With their last game of the season coming away to Freshford Town, this is a promotion battle which could go all the way.