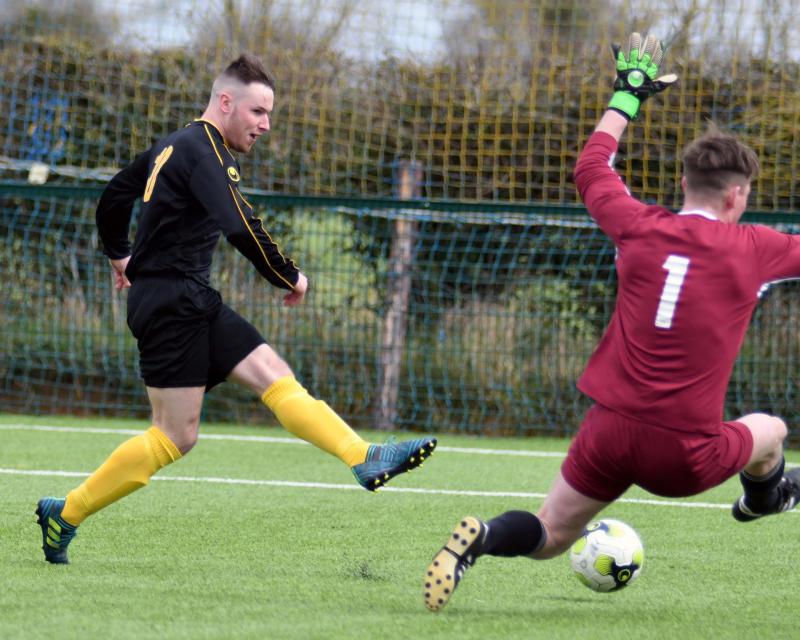 The Kilkenny & District League are on the brink of booking a place in the Oscar Traynor Trophy final - but first the Cats have to get over a footballing Goliath.

The team, who are managed by Jim Nugent and Jim Cashin, will travel to Ennis on Sunday to take on defending champions Clare in the semi-final.

The Cats face a tempting prospect; win, and they will have the comfort of a home draw against Carlow in the final.

However, they won’t look before they leap.

“Any side going for three titles in a row deserves our respect,” joint manager Jim Cashin said of the Munster side. “They have the big game experience, but we’ll go to Ennis with no fear.”

Kilkenny will draw on their own experienced side and on previous results, starting with their 2-0 win over the Leinster Senior League on the opening day.

It was a great performance from the visitors, who were boosted by a penalty save from Owen Wall in the first half. In what was a polished display - defenders Niall Andrews and David Rice led the way with inspirational performances - second half goals from Dean Broaders and Henry O’Neill saw Kilkenny blast their way into the second round.

The confidence in the side became even stronger when they travelled to Navan and crushed the North East League 8-0. Kilkenny have had mixed results at the Meath venue in the past, but sounded out a warning with a superb display.

Emmet Nugent led the way, helping himself to five goals on the day as they tore the home side to shreds. Henry O’Neill continued his scoring form by tacking on a brace, while Paddy Cahill wrapped up the emphatic win to send the Cats on to the quarter-finals.

After two wins on the road, Kilkenny continued on their successful ways when beating the Inishowen League 3-0 at home.

Playing a slick style of football, Kilkenny had too much pace and power for the Ulster side to cope with as they ran them ragged at Evergreen Park.

Nugent continued his good scoring form, grabbing a goal in the early stages of either half. He turned provider for the third, teeing up O’Neill to cement an impressive win and set up that Clare semi-final.

Injury means Kilkenny will have to do without Declan McQuillan, but may have Sam Hickey back in time for the game. In light of those absences Dara Keane (Evergreen A) and Mick O’Neill (Thomastown United A) have been added to the squad.

Sunday’s game promises to be a cracker, but whatever the outcome Cashin is adamant that Kilkenny won’t leave Ennis without giving their all.

“From the very start we knew Kilkenny had players who were good enough to win this competition,” he said. “Clare have a strong team but there is a lot of experience in this side too. We’ll go there with no fear.”