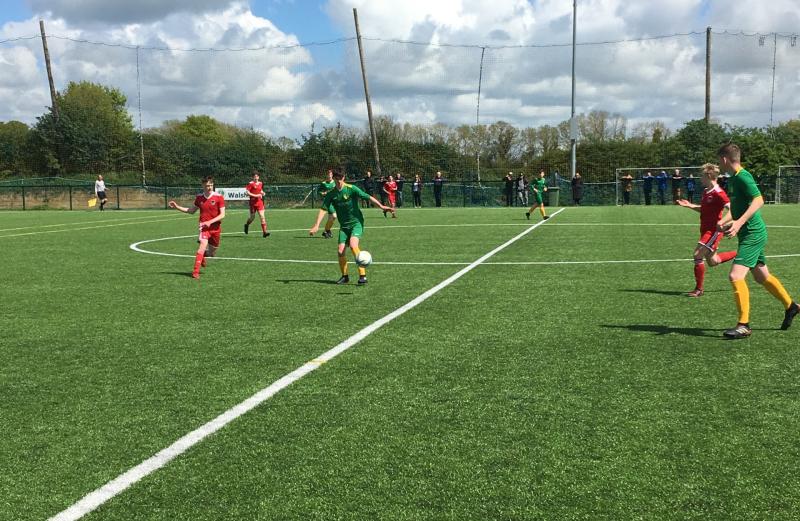 Action from the game between Carlow Kilkenny FC and Cork City

A good start and a strong finish saw Cork City bring high-flying Carlow Kilkenny FC back to earth with more of a bang than a bump on Saturday.

The Rebels ran riot at Evergreen Park, with Chris O’Connor bagging a second half hat trick as they boosted their lead at the top of Group Three in the under-15 Airtricity League.

While Carlow Kilkenny were looking to build on their 3-0 win over Kerry in round five of the league they found life tough against a very sharp Cork side who seized on any opportunity that came their way.

The visitors were slick in attack, working the ball around from the off as they pushed for an early goal. They almost made the breakthrough after nine minutes, when O’Connor sent a looping header goalwards, but netminder Mark McCarthy got back to smartly tip the ball over the bar.

The home side hit back, going close when Rory O’Dowd curled a 12th minute free over the City wall but ’keeper Darragh Burke was there to make the save. Mark Ross’s side had another chance to break the deadlock after 16 minutes, when Fionn McCaffrey got on the end of Eamon Lalor’s corner and glanced it across goal, but no-one was there to turn the ball home.

Cork went back on the attack, but some fine McCarthy saves kept them at bay. The Carlow Kilkenny ’keeper made a fine reaction save to beat out Sean Cummins’ close-range shot, then got a good hand behind Fintan Cody’s shot to turn the ball around the post.

McCarthy frustrated Cody again on 35 minutes, turning the midfielder’s shot over via the crossbar, but he was finally beaten from the resulting corner. Cody picked up play following a short corner routine between Oran Crowe and Elays Eshanji, pausing only to lash the ball high into the net.

Carlow Kilkenny went back on the attack, but their best efforts came to nothing. Zach Bay Hammond had a chance to shoot them level soon after, but Burke did well to push the ball to safety.

Cork turned up the pace in the second half, boosting their lead within minutes of the restart. They doubled their advantage when Dylan O’Halloran pounced to turn a loose ball home after Crowe’s 43rd minute free broke his way. He turned provider seven minutes later, floating a ball in for the unmarked Chris O’Connor to head past McCarthy.

Carlow Kilkenny didn’t give in but couldn’t find a way back into the game. Niall Rowe went close when he dashed on to Rory O’Dowd’s 56th minute pass and nicked the ball past Burke, but Barry McCarthy got back to clear it off the line. The home side went close again soon after, Hammond finding space to shoot, but Burke was there to make the save.

Just when it looked like Carlow Kilkenny were gaining some momentum Cork slammed the door shut. The visitors hit three goals in the last 10 minutes, O’Connor making it 4-0 when he finished following some unselfish play from Keelan Crowley.

He completed his hat trick five minutes from time, chesting down Eshaji’s cross before adding a cool finish. There was time for one more, Ramon Gaspar making it 6-0 from close range to complete a big win for City.

Carlow Kilkenny will be hoping to bounce back on the double this week. They are due to face Wexford FC in the National Cup in Ferrycarrig Park on Wednesday evening, before it’s back to the league and an away game against Galway United at the weekend.