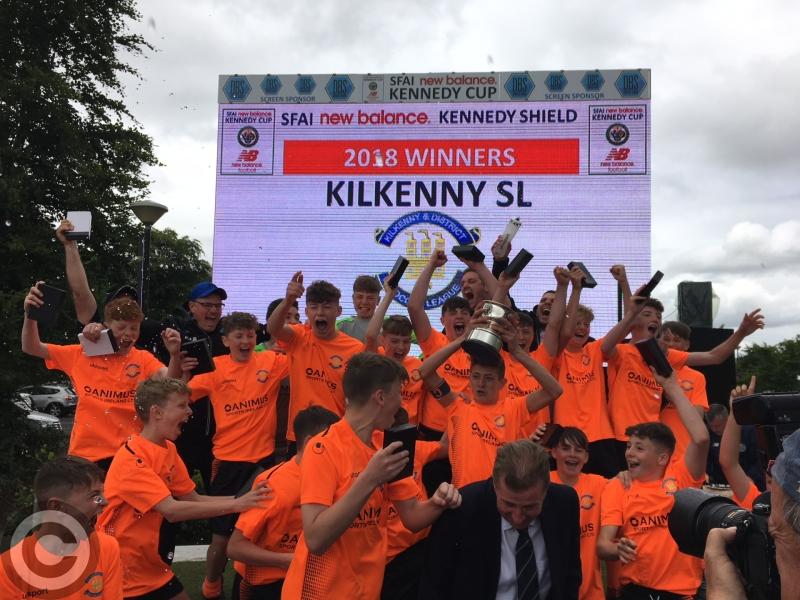 The Kilkenny team celebrate with the Kennedy Bowl

Kilkenny’s Kennedy Cup adventure ended on a high after they bagged the Bowl title. Cillian Kelly’s extra-time was the difference as P.J. Brett’s side came through a tough game with the Midlands League to get their hands on the silverware. There was nothing to separate the sides in the opening half. Ross Clinton went close to scoring for the Midlands but saw his shot cleared off the line. Kilkenny upped the ante in the second half and had good chances through Kian Dunne and Mickey Thomas, but neither could force the ball past Midlands goalkeeper Conor Browne. The game looked to be heading for penalties when the Cats pounced. Sean Moore’s long throw-in was worked across the box by Thomas and Nathan Murray. Cillian Kelly reacted quickest, racing to add the finish and seal the title. Kilkenny Starting XI: Bill Hughes (East End United); Sean Moore (Evergreen), Evan Rudkins (Paulstown 06), Matthew Kelleher (Evergreen), Tadhg Gill (Deen Celtic); Mikey Raggett (Evergreen), Ted Dunne (Highview Athletic, captain), Cillian Hackett (Evergreen); Robbie Ring (Deen Celtic), Kian Dunne (Evergreen), Cillian Kelly (Freebooters).