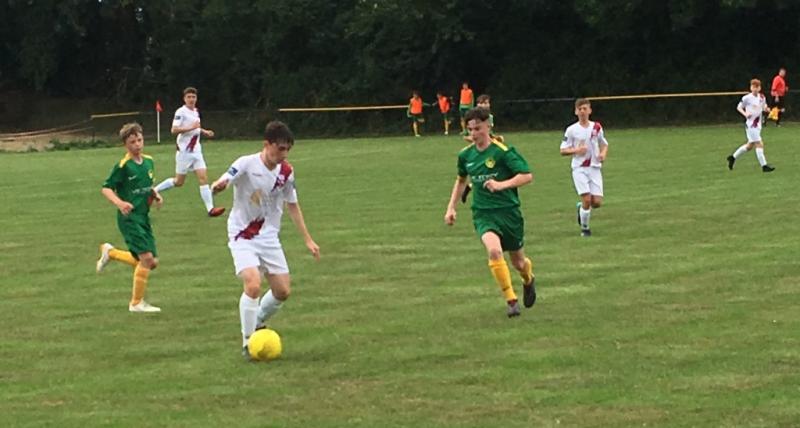 Action from the Airtricity League game in Derdimus

It was a brave performance, but Carlow Kilkenny saw the first phase of their maiden SSE Airtricity League season end in a narrow defeat.

Galway United were the marauders, leaving Derdimus with all three points after defender Conal Gallagher powered home a second half header to give the Westerners a lead they wouldn’t lose.

With Galway chasing a place in the elite phase of the league the home side knew they were in for a tough test. United made a flying start, taking just five minutes to make their attacking intentions clear. Galway raced into an early lead, Jack McCarthy doing the damage inside five minutes when he raced on to a through ball and fired past netminder Josh Coady.

Rather than fall away, Carlow Kilkenny rose to the challenge. It paid off as, within 60 seconds, they were back on level terms.

Pouring forward from the resulting kick-off, the home side caught their rivals on their heels. Oscar Brennan and Niall Rowe started the move, linking up before working the ball out to the right for Cian Byrne to run on to.

Byrne’s teasing cross caused panic in the Galway box. Eamon Lalor was on it in a flash, coolly taking a touch before smashing an unstoppable shot past goalkeeper James Egan.

The goals were the perfect start to what proved to be an attacking game. Carlow Kilkenny had a good chance to go in front when Rory O’Dowd weaved his way into the box, but he lashed his shot into the side netting.

Galway hit back, going close when Gary Higgins zipped a long-range shot over the bar in the 13th minute, while Shane Befula carved the home side open with a quick run, but his tame shot never troubled Coady.

Carlow Kilkenny pressed on but missed the chance to go ahead with five minutes left in the half. Niall Rowe did the hard part, losing his man to get on the end of a dangerous Rory O’Dowd free, but he couldn’t keep his header on target.

The game turned Galway’s way when Gallagher struck 12 minutes into the second half. To their credit Carlow Kilkenny didn’t stop attacking - Cian Byrne and Darren Lawlor had chances, while Oscar Brennan was denied by a superb save from Egan – but neither did Galway. They came closest to changing the scoreline when sub Darragh O’Malley unleashed a venomous long-range shot, but the ball cannoned back off the crossbar.

Next up for Carlow Kilkenny is a National Cup clash with Limerick. That game will be played in Derdimus next Saturday.