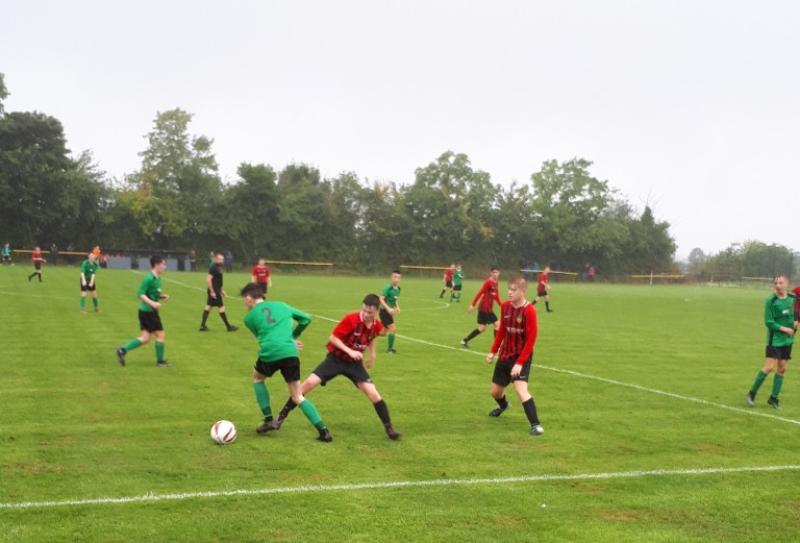 Action from the Carlow Kilkenny v Kerry game in Derdimus

Two wins from two games have left the Carlow Kilkenny under-15s sitting pretty at the top of the Airtricity League table.

The local side followed up on their opening day 4-0 win away to Cobh Ramblers by beating the Kerry League 2-0 in their first home game of phase two thanks to two Adam McCarron goals.

With Niall Rowe pulling the strings in midfield Carlow Kilkenny pushed hard for the opening goal. Jack O’Neill thought he had scored it when he latched on to Adam McCarron’s floated free, but his 19th minute shot was deflected over the bar.

The home side shrugged off the miss and duly took the lead from the resulting corner. Rory O’Dowd’s corner was just right for McCarron, who made no mistake with a powerful header.

Kerry, who beat Waterford 3-0 last week, were determined to get back into the game. Cian Brosnan went close to getting an equaliser on the half hour when he connected with Rob Vasiu’s corner, but he couldn’t get enough pace on the ball to beat netminder Josh Coady.

The home side finished the half strongly but couldn’t add to their lead. Zach Bay Hammond had some chances, the second of which saw him beat goalkeeper Aaron O’Sullivan in an aerial duel, but he couldn’t guide his effort inside the far post.

Carlow Kilkenny stepped up the pace in the second half, doubling their lead seven minutes after the restart. Eoghan Byrne was at the heart of the move, using his strength to hold off two defenders but was fouled in the box. Adam McCarron took the penalty, coolly blasting it to the net.

Carlow Kilkenny went hunting for more goals after that but couldn’t take their chances. Byrne had a close range header stopped on the line, while Oscar Brennan fizzed a 66th minute shot past the far post. Zach Bay Hammond went closer when he got on the end of Jake Ffrench Davis’s cross late on, but he lashed his shot over the bar.

Next up for Carlow Kilkenny is a home game against Waterford this Saturday.