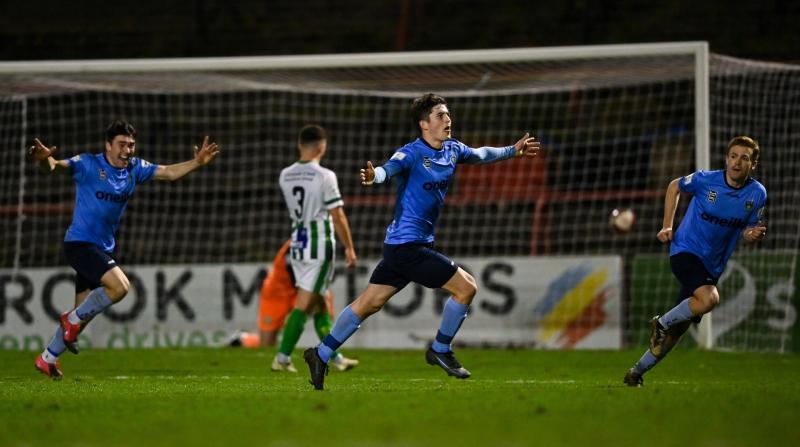 A peach of a free-kick from Thomastown's Colm Whelan helped UCD keep their promotion hopes alive as they blasted past Bray Wanderers to set up a meeting with Waterford.

Whelan, who played with Waterford before signing for the Students, delivered a top class strike that helped his side get the better of Wanderers in the SSE Airtricity League promotion/relegation semi-final.

The Thomastown native also provided an assist for the second goal as Whelan, fellow Kilkennyman Dara Keane and their UCD team-mates kept their hopes of earning a place in the SSE Airtricity Premier Division for 2022 alive and kicking at Dalymount Park.

There was tension in the Phibsborough air with both sides taking time to settle into the occasion. With plenty of attacking talent on display, the sides managed to neutralise the danger man with both sides unwilling to over-commit early on.

The Students had two early long-range efforts sail over Brian Maher’s goal with fellow Ireland under-21 international Liam Kerrigan driving at the Bray defence in an attempt to get his side going.

Gary Cronin’s Bray went direct for what turned out to be their best chance of the opening half with goalkeeper Maher’s quick distribution finding Brandon Kavanagh who drew a fantastic goal-saving tackle from Evan Osam.

The best chance of the half fell to UCD with Michael Gallagher with a superb ball to Darragh Keane and his pull-back found Whelan whose effort came back off the woodwork. As the opening period ended, both sides were wasteful with set-pieces with few chances from open play emerging.

Bray stated the second half with real intent, seeking to get wide-men Kavanagh and Ryan Graydon more involved. UCD weathered the early onslaught, content with counter attacking with some dangerous direct balls to frontman Whelan. And it was the UCD talisman who broke the deadlock on the 67th minute. Driving at the Bray defence, Whelan drew a foul in a central area. Whelan dusted himself down before unleashing a thunderous strike past Brian Maher who was left routed to his goal line for his 21st goal of the campaign.

Bray attempted to get back into the game with speculative efforts from Barnett, Byrne and O’Farrell failing to test Lorcan Healy in the UCD goal. As the Seagulls pushed forward, it was Andy Myler’s UCD who manged to extend their lead. The tireless Paul Doyle intercepted and played a neat one-two with both Kerrigan and Whelan before calmly slotting the ball passed Maher to seal the game with two minutes left on the clock.

For Bray, it is play-off heartache for the second successive year while for Andy Myler’s men, it is a showdown with Waterford next week for a place in the Premier Division for 2022.

The SSE Airtricity League Promotion/Relegation Play-Off Final between Waterford FC and UCD AFC will be played in Richmond Park, Dublin on Friday at 7.45pm. The match will be streamed live on www.loitv.ie. Ticket details will be announced on Monday.