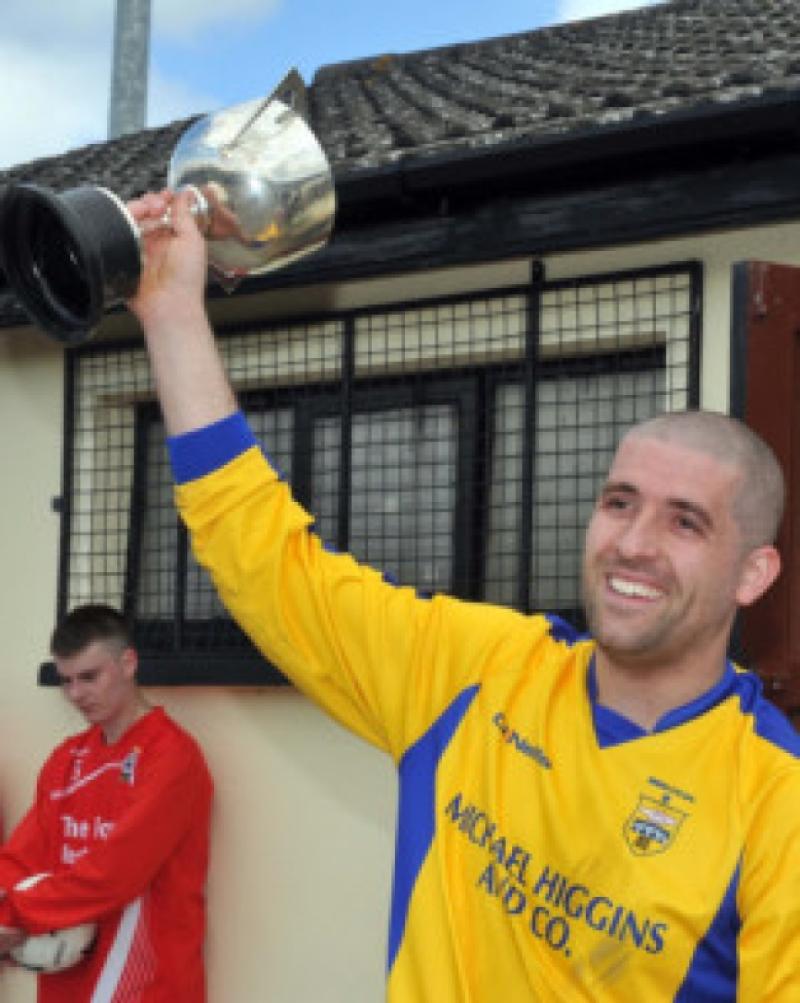 IT WAS the perfect way to end a perfect season.

Bridge United B completed a remarkable campaign by adding the Division Three Cup to the league title already safely residing in Goresbridge.

A 4-2 win over Gortnahoe’s St Ann’s - the same side Bridge beat to lift the Cup last season - also capped a fine finish to the 2012/13 campaign for United, who maintained their 100% record in Derdimus on Sunday.

The league champions purred into action in the opening half, taking control of the affairs, but had to endure a little Tipp revival before they were able to start the double celebrations.

The game was still delicately poised with 10 minutes to go when Bridge led 2-1 up, but St Ann’s had been mounting a strong comeback. The pressure was on, but Bridge grabbed some breathing room when sub Marty Dalton was tripped inside the box. Shane Murphy tipped his side towards the title when he coolly stepped up and sent netminder Chris Hughes the wrong way from the spot.

Bridge were two goals up, but didn’t settle for that. Three minutes later they all but wrapped up the spoils, Tom Huff drilling a low free kick through the St Ann’s wall and past Hughes.

Bridge did most of the early running, pinning the Saints back for large spells of the first half. Looking for a quick opening goal they had a great chance to get just that when Darren Foley skimmed a low corner into the box on nine minutes, but Shane Murphy’s sidefoot shot flew over the bar.

Foley had a large say in most of Bridge’s early chances, going close with a 21st minute raking shot that Hughes did well to claw back before it could cross the line. He went one better 60 seconds later, linking up well with Kevin Curran before clipping a low shot inside the ’keeper’s left hand post.

Bridge were in full control now and took just eight minutes more to double their lead. Sparked by Gordon Breen’s quick free Colin Rea sped down the left and teed up Foley in the corner. Neat footwork saw him skip past a challenge before fizzing in a low cross to which Ian O’Neill added a confident finish.

The pressure was on St Ann’s, who finally raised their game in the closing stages of the half. Sub Shane Gorman set up their first chance with a teasing ball that bounced over the advancing goalkeeper Zak Shermar. Jason Phelan was on it in a flash, but his 38th minute shot crashed into the side netting.

Ann’s didn’t let up and fought their way back into the game just seconds before the break. Bridge failed to fully clear Tommy Neary’s 44th minute free and were punished when the ball fell at the feet of Stephen Neary. The striker saw his chance and took it, driving a first-time shot high into the top left corner of the Bridge net.

That left both sides with something to fight for in the second half. Ian O’Neill went close to extending the Bridge lead when he got on the end of Darren Foley charge and chipped Chris Hughes with a deft 50th minute lob but he couldn’t find the inside of the far post.

St Ann’s were sharper in attack in the second half also. They had a great change to level matters when Mark Phelan’s dangerous 53rd minute cross fell to Stephen Neary, but he leaned back too much and lashed his sidefoot shot over the bar.

Foley continued to pull the strings for Bridge in the second half, using his pace to cut inside and worry the Ann’s defence. One such move saw Foley win possession inside his own half on 57 minutes and set off. Skipping past several tackles Foley bore down on goal, but netminder Hughes did well to get down to his right and make a fine save.

Hughes was the busier of the two goalkeepers in the second half, coming to his side’s rescue again when he pushed a long range Tom Huff daisy-cutter to safety with 73 minutes on the clock.

The netminder saved his best stop for a few minutes later, after Colin Rea drove a teasing cross into the crowded box. Shane Murphy was quickest to react, sending a bullet header towards the top left corner, but Hughes showed incredible reactions to turn the ball round the post.

He had no such luck with the two-goal salvo in three minutes that pushed Bridge towards the second leg of their double. Despite the three-goal deficit St Ann’s didn’t give up, posting a quick reply when John Broderick nipped in to head a Tommy Neary home with five minutes of normal time to play.

St Ann’s pressed on, going close to a third goal when James Burke’s glancing header smacked off a post in the dying minutes, but they couldn’t stop Bridge from putting the seal on their successful season.