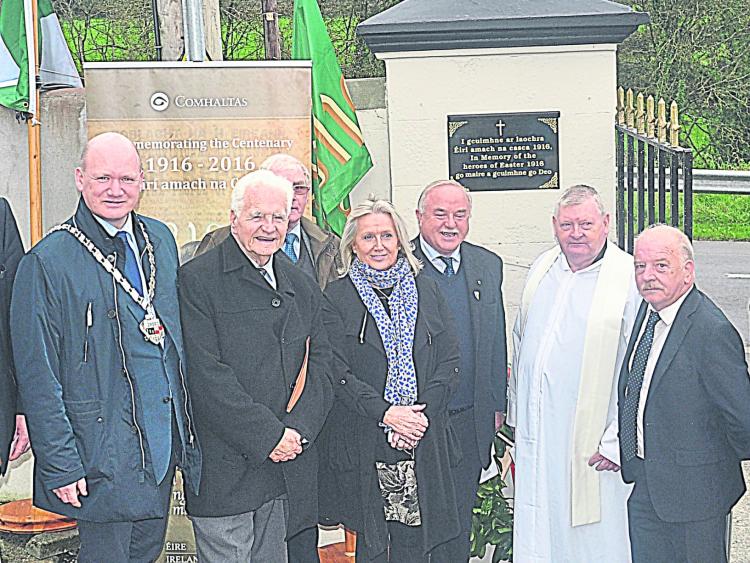 Gathering for the unveiling of the commemorative plaque at St. Beacon's, Mullinavat

There was a large attendance for a thoughtful and reflective ceremony held on 28th October in the grounds of St. Beacon’s, Mullinavat to unveil a plaque dedicated to the heroes of the 1916 Rising.
The event was organised under the aegis of Comhaltas Ceoltóirí Craobh Muilleann an Bhata with Seán Maher acting as MC for the ceremony.
Tomás Breathnach, member of Comhaltas and of Kilkenny County Council’s 1916 Commemoration Committee, introduced the ceremony saying it gave everyone present an opportunity to look back at the events, the people and the time when the destiny of the nation was completely reshaped.
In future people will pause at the plaque at St. Beacon’s and they too will reflect and commemorate the men, women and children of 1916.
Cllr. David Fitzgerald, Cathaoirleach of Kilkenny County Council, referred to the decade of commemorations which will continue as we reflect on the momentous events of one hundred years ago.
We were fortunate to be the children of the republic which the leaders of 1916 strove to achieve.
Historian, Jim Maher, opened his address by acknowledging the role of women in the 1916 Rising. There were over 200 female volunteers involved in many roles including as nurses, dispatchers and as insurgents. Given the proximity of Mullinavat to New Ross he went on to pay a special tribute to Michael O’Hanrahan who fought in Jacob’s Biscuit Factory under the command of Thomas McDonagh.
He gave an account of the visit to Kilmainham by Michael’s sisters, Eily and Ciss, on the night before his execution and how they had met Grace Gifford who had just married Joseph Plunkett. Michael O’Hanrahan and Joseph Plunkett were executed the following morning.
Jim also paid tribute to Thomas Ashe who had trained to be a teacher in De La Salle, Waterford from 1905 to 1907. He later taught in Monard, Co. Kerry and as Principal in Corduff, Lusk, Co. Dublin where he founded a branch of the Gaelic League through which he met Patrick Pearse. Thomas Ashe attended the inaugural meeting of the Irish Volunteers in 1913.
Following the Battle of Ashbourne he was arrested and jailed in England. On his release in 1917 he became a noted speaker at by-election rallies and was consequently charged with sedition. He went on hunger strike in Mount Joy and attempts to force feed him greatly damaged his health. He died at the age of 32 years. Over 30,000 people attended at his funeral.
The commemorative plaque was unveiled by Fr. Liam Barron, Parish Priest of Mullinavat. In his blessing Fr. Barron said that the plaque would be there in the grounds of St. Beacon’s for generations and the heroes of 1916 would be remembered and that we should give thanks to them, be proud of them and that their great deeds would not be forgotten.
The leaders of 1916 were extraordinary with huge intellectual ability said Frank Madigan in his tribute to them. While many thought of 1916 in military terms we must also think of the social and cultural revolution which they sought to lead. He read ‘The Wayfarer’ and ‘Bean an Sléibhe ag Caoineadh a Mic’ by Pearse and ‘I see his blood up the rose’ by Plunkett.
He finished by leading the attendance in a rendition of ‘Óró sé do bheatha ‘Bhaile’.
Tomás Mac Aodh Bhuí read out the Proclamation of 1916, reading the first part of it in English and the second in Irish. John Doyle and Paddy Horohan, United Nations Veterans Association, laid a wreath at the base of the plaque. Séamus McDonald, Chairman of Comhaltas Ceoltóirí, Craobh Muilleann an Bhata thanked all the speakers for their contributions to a thoughtful and reflective commemoration of the heroes of 1916.
He thanked Fr. Barron for his agreement to the location of the plaque and for his kind words and blessing, Kilkenny County Council and St. Dominic Credit Union for their sponsorship of the event, Stephen Bergin for his work on the plaque, Maria Murphy for her work on the wreath and the UN veterans and public representatives for their presence.
He also thanked Michael Power for his music and the provision of the sound system and Seán Maher in his role as MC for the occasion and for his commitment to the project.
Séamus invited everyone over to the Parish Hall for tea and refreshments and expressed his appreciation to Kitty Walsh and all in the Parish Hall for the catering.