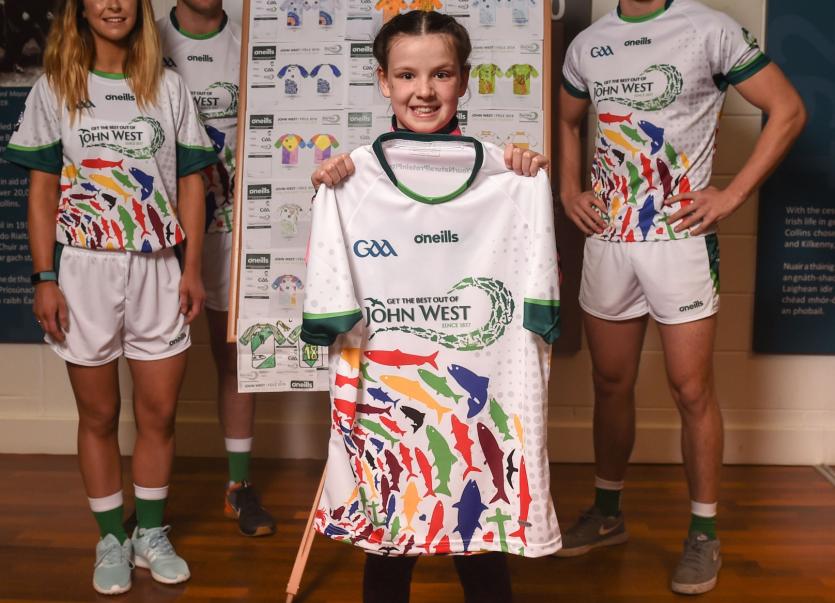 Aoibheann O’Neill from Stoneyford was today announced as the winner of the inaugural John West Féile 2018 Jersey Design Competition.

John West in conjunction with O’Neills handed over the design of this year’s official Féile jersey to the children of Ireland and called on them to give their best to John West by designing their very own jersey and making their mark on Féile 2018.

The competition ran in March of this year and provided an additional vehicle for children to get involved in Féile.

Promoted by O’Neills, John West and the GAA, the competition received hundreds of entries of a very high standard from Féile enthusiasts nationwide making judging very difficult. The winning design, submitted by Carrick Shock player, Aoibheann, based her design on the jersey colours of hurling & camogie winners of the John West Féile 2017.

Aoibheann was announced as the winner at the official John West Féile Launch which took place in Croke Park.Cork hurler Eoin Cadogan, Dublin footballer Paul Mannion, and Roscommon ladies Gaelic footballer Amanda McLoone were all on hand to launch the competitions and were the first people to wear the official Féile 2018 jersey.

The John West Féile na nGael and Féile Peile na nÓg competitions are national festivals for Gaelic football, Ladies Gaelic football, Handball, Hurling, Camogie and Rounders played at Under 14 level involving both national and International teams. The highly-anticipated competition gives up-and-coming GAA superstars the chance to participate and play in their respective John West Féile tournaments, at a level which suits their age, skills and strengths.

This is the third year that John West will sponsor the underage tournament, which is the biggest competition of its kind in Europe. Throughout its sponsorship of the Féile, John West has focused on encouraging children to participate in Gaelic Games while emphasising the importance natural protein plays in fuelling a young athlete.