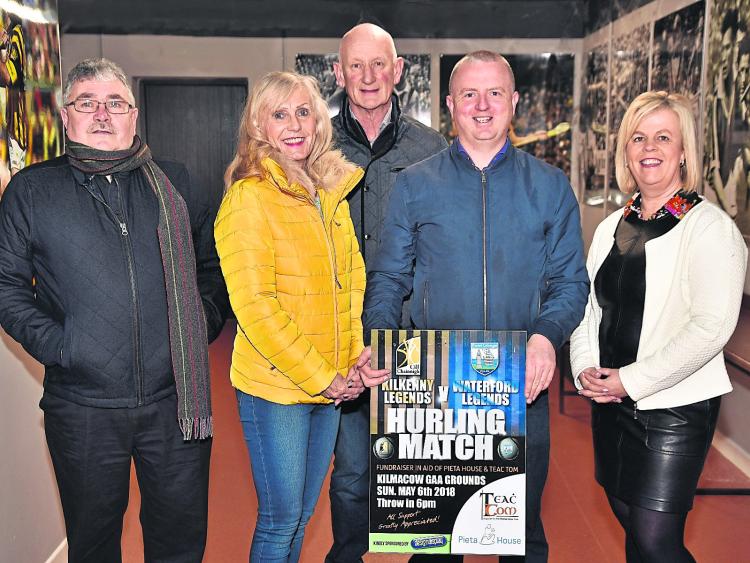 A charity hurling match between the Kilkenny and Waterford sporting legends will be held at Kilmacow GAA Grounds at 6pm this Sunday.
A host of talented All Stars including D.J. Carey, Noel Hickey, Eddie Brennan, Tommy Walsh, Ken McGrath, Tony Browne, Eoin Kelly, Fergal Hartley, Paul Flynn, John Mullane and Dan Shanahan will form two dream teams.
Adding to the electric atmosphere will be the appearance of veteran broadcaster Micheal O Muirthertigh who will be the guest of honour.
Dickie Murphy will referee on the day and the Thomas Francis Meagher pipe band will also be making a special appearance.
€10 entry for the day and children under 16 are free and all proceeds will be donated to Teac Tom and Pieta House, who are both charities that promote mental health.
Hurling giants, Brian Cody and Jim Greene, who are both 1982 GAA All-Stars for their respective counties recently launched the event.
“It is a very important event, everyone is affected by mental health and people can identify with these GAA players,” said Kilkenny hurling manager Brian Cody.
“We need to send a message out that there are safe places to go and get help.”
The Kilkenny team is Martin Carey, James Ryall, Noel Hickey, Michael Kavanagh, Tommy Walsh, Michael Rice, K’ieran Joyce, Willie O’Dwyer, Martin Comerford, John Power, Aidan Fogarty, Brian Dowling, DJ Carey and Eddie Brennan. The Waterford team is Stephen Brenner, Eoin Murphy, Sean Cullinane, Brian Flannery, Stephen Frampton, Fergal Hartley, Brian Greene, Tony Browne, Peter Queally, Eoin Kelly, Ken McGrath, Seamus Prendergast, John Mullane, Dan Shanahan and Michael White.