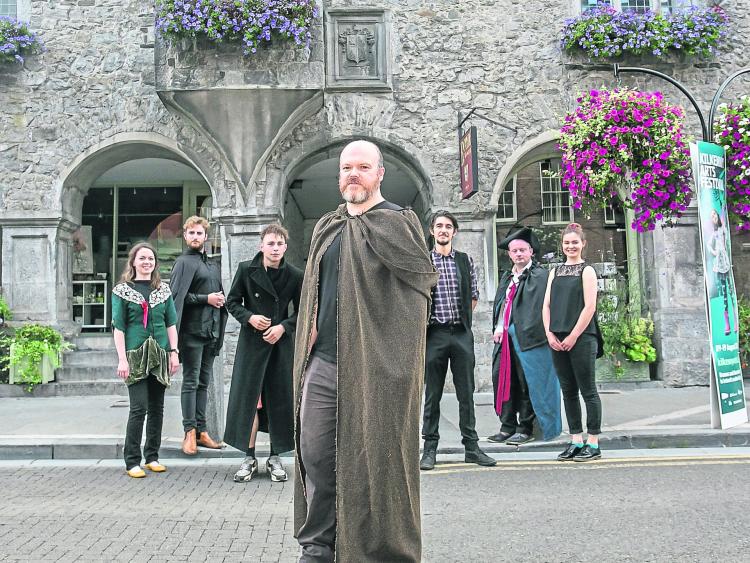 For the first time in many years a local group will perform William Shakespeare’s classic play, “The Merchant of Venice”.
The newly formed Shakespeare Company has been busy rehearsing in Castlecomer for the last number of weeks.
Performances will take place in Rothe House on Monday and Tuesday at 8pm nightly.
The Shakespeare Company is different from other local drama groups.
Its sole focus is on looking at plays through intensive rehearsal and work shopping.
Formed by a chance meeting of local actor Michael Somers and Theatre professional Janice De Broithe, both of whom set out to bring Shakespeare to the South-East.
“We are dipping our first toe in the water doing this kind of thing,” said Michael.
“Our plan is to develop and perform other Shakespeare plays in the future through workshops and monologues. We have been overwhelmed by the reaction so far,” he added.
Director Janice De Broithe has been very busy building her theatre career. After studying drama in UCC she headed to the bright lights of London to study directing in LAMDA.
Her shows are of exceptional quality while her track record of giving new actors and developing their talent is second to none.
“We would encourage the audience to partake in the show,” she said. “If they have masquerade masks or Venetian masks bring them as the audience will be central to this show.”
But, the last piece of the jigsaw was finding someone who was knowledgeable on Tudor music.
That was to be found in the shape of Castlecomer Arts Academy director Claire McHugh. With a cast of Kilkenny and Carlow people, Castlecomer became the ideal rehearsal venue.
The staging of this play will happen in Rothe House. As many history buffs know this is Ireland’s finest mansion from Tudor times.
More interesting is that it was built in 1603, the very same year as the first performance of Merchant of Venice.
“We are excited to show Roth House off,” said Patricia Duff.
“This play fits into everything we try and do here. We’re happy to give local talent an outlet to perform,” the Rothe House manager said.
The play is set in Venice, the epicentre of consumption, speculation and debt, rivalry and prejudice reign.
Antonio requests a loan from the ostracised Jewish moneylender Shylock, who agrees.
If he fails to repay his debt, Antonio must give Shylock a pound of his flesh by way of recompense.
Shakespeare dramatises the claims of tolerance and intolerance, justice and mercy, while in the character of Shylock, the bard created one of the most memorable outsiders in all theatre.
“We have given everything to this play,” said Janice De Broithe.
The director thanked her cast of Aoife Cody, Sorca Cox, Sean Gordon Dalton, Rosie Hayes, Paul McManus, John Rice, Eimear Roche and Kevin Tynan.
“They have made this project,” she said. “Hopefully the fun we have had can be seen in our interpretation of this comedy.” Tickets, priced €15, are available at Eventbrite, 083-8673114 or “The Shakespeare Company” on Facebook.