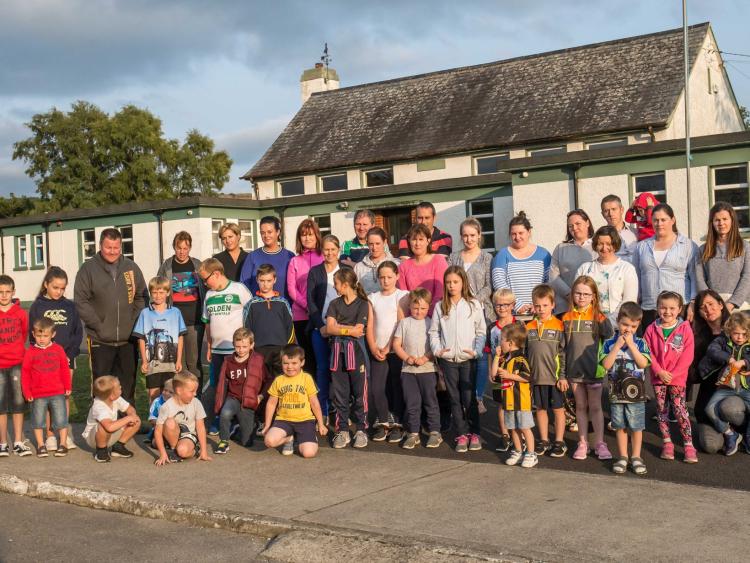 Parents and children outside Ballyhale National School still waiting on tickets for the bus journey to school PICTURE: PAT MOORE

Today is the first day back to school for the children of Ballyhale National School but, for a group of them, there is uncertainty over whether they will be there again tomorrow.

They have been told there's no room for them on the school bus as they were not offered a concessionary ticket by Bus Eireann this year. Their parents are worn out with the stress of the situation.

Elaine Cleere, who works full time as a nurse in Waterford, has had to take a day off work today (Wednesday) to bring her daughter Ciara (10) to school. She has had a place on the bus in recent years, but not this time.

Another parent, John Drennan, has four young children all attending the school. None of them have been given a bus place.
Incredibly, the school bus actually drives past both families’ homes twice a day, to pick up and drop off other children to school.

This is the debacle unfolding in Ballyhale this week, where parents are incredulous at what is happening, and young children are asking why their friends have a seat on the bus but they do not. Around a dozen children are affected at this particular school.

“I’m a nurse and went back to full-time employment in June because my older daughter is starting college.  I thought I was at the stage where I had my children independent enough.”

“The reality of it now is I can’t facilitate my youngest daughter to go school unless I give up work.”

John Drennan’s family live just over 7km from the school. A busy farmer, he would have to make repeat trips throughout the day to bring his children to and from school.

“For me at the moment, if I was to be doing a round trip, I’d have to be going down in the morning, come down at 2pm and come down at 3pm,” he says.

There is now real concern that some children may not be able to attend school tomorrow (Thursday). While parents traditionally bring their children on their first day to help them get sorted, no one is sure what is going to happen after that.

The affected parents also described their frustrations in dealing with Bus Eireann and trying to engage with Minister of State John Halligan. Many of them made appeals to Bus Eireann, but say they did not get a reply.

Part of what’s fuelling the frustration is the way in which Bus Eireann’s ‘computerised random selection process’ system   of allocating concessionary bus tickets has actually worked out geographically.

“The irony of it all is, there’s one eligible child up the road from us, and in our case, the bus is going to pass by my gate twice in the morning and twice in the evening — to go up and collect one child at the bottom of our road and turn around and  pass us again,” says Elaine.

The affected parents  have organised a poster campaign and a petition,  but they are at their wits’ end. What they are hoping for now is a minibus to be provided   — even for just the morning — that could pick up the extra demand.

“If we were just to get an extra minibus in the morning it would relieve the pressure, because the numbers then would be going home at 2pm, the junior and senior infants go home at 2pm. So there would be loads of room on the 3pm,” says John.

John also warns that, with an increasing number of students coming into the schools, this problem may well get worse unless serious action is taken to address it.

“It’s not a short term thing. This is something that needs to be done for a couple of years. It’s ongoing all over the county and country, not just here.”