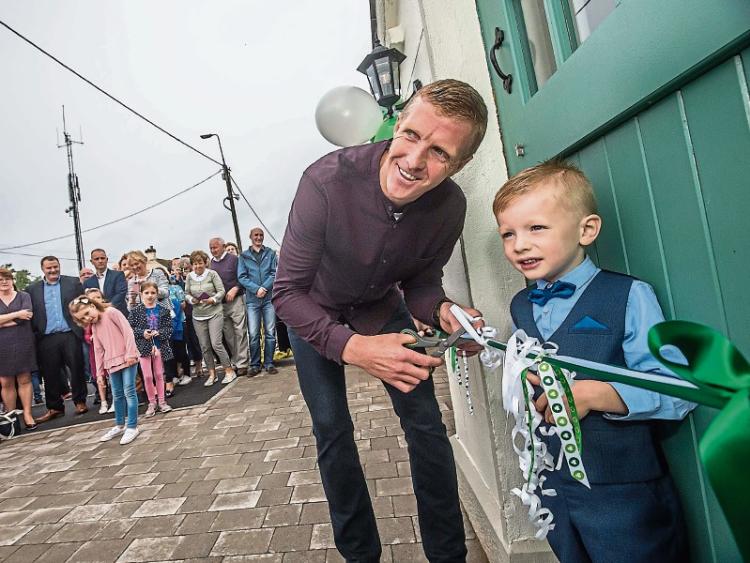 Rural Ireland began it’s fight back from dwindling social resources and isolation with a great display of community spirit in the village of Ballyhale, last Saturday.

The official opening of Billy's Tea Rooms was the cause of the celebration - marking years of hard work and dedicated volunteerism.

Local hero Henry Shefflin was on hand to cut the ribbon and he was ably assisted by little Billy Kiely, grand nephew of the man who gave his name to the tea rooms.

Speaking to his friends and neighbours, Henry reminded them of the important of community.

‘It takes a village to rear a child,’ he quoted, recalling the busy village of Ballyhale during his childhood. At that time there were three or four shops, pubs and a vibrant main street. That vibrancy went out of the place when it was bypassed by the motorway, he said. “I think what we lost was our confidence. The parish was decimated and we weren't here to talk to each other.”

He said things like Facebook and Twitter are not what's important. What is important is to come into the village and have a cup of tea. “There are people here to support you and that's what was missing from the community,” he said.

Underlining the importance of community, Henry said he was fortunate to represent Ballyhale on the national stage. His proudest days were winning his first county championship with Ballyhale and bringing the Liam McCarthy Cup back to the village.

He thanked all involved in setting up Billy's Tea Rooms, especially the volunteers who worked countless hours behind the scenes.

“Working together we can achieve anything,” Noreen Murphy, chairperson of the Tea Rooms committee told those gathered. They have brought a renewed life to the village with the opening of the community facility, which also encompasses a shop. The idea for the project was sparked three years ago. There was a community desire for a way to get together. It began with a weekly coffee morning but with the ideas, help, assistance and financial support of many people and groups the Tea Rooms were born.

“We have a phenomenal amount of skill in this community, and we used all those skills during the process,” Noreen said.

The Tea Rooms and shop are run entirely by volunteers. More are always needed and Noreen says you will join “a happy, hard working group.”

That the atmosphere at Billy's Tea Rooms is welcoming to all is not in doubt, and the quality of the food is also excellent - as several speakers at the opening ceremony attested to.

Denis Drennan, of Leader, said they were delighted Ballyhale came forward with thier tea rooms and shop proposal. An amazing amount of towns and villages in Kilkenny do not have a functioning shop. He predicted the success of Ballyhale's project will see it replicated in communities across the county, and country. Volunteers during the opening of Billy's Tea Rooms in Ballyhale PICTURE: PAT MOORE

Chairman of Kilkenny County Council, Eamon Aylward, said the people of Ballyhale had a choice, accept the situation or get up and do something - “That ye have done and it's a credit to every person in Ballyhale.”

Michael Delahunty, of the County Council's Community Department, paid tribute to the work of the committee.

More than 150 local people attended the official opening and a stunning 78,000 people from across the world tuned in to a live, internet broadcast of the ceremony.

Among those who joined in the community celebration in Ballyhale were local councillors and TDs.

The committee during the opening of Billy's Tea Rooms in Ballyhale PICTURE: PAT MOORE