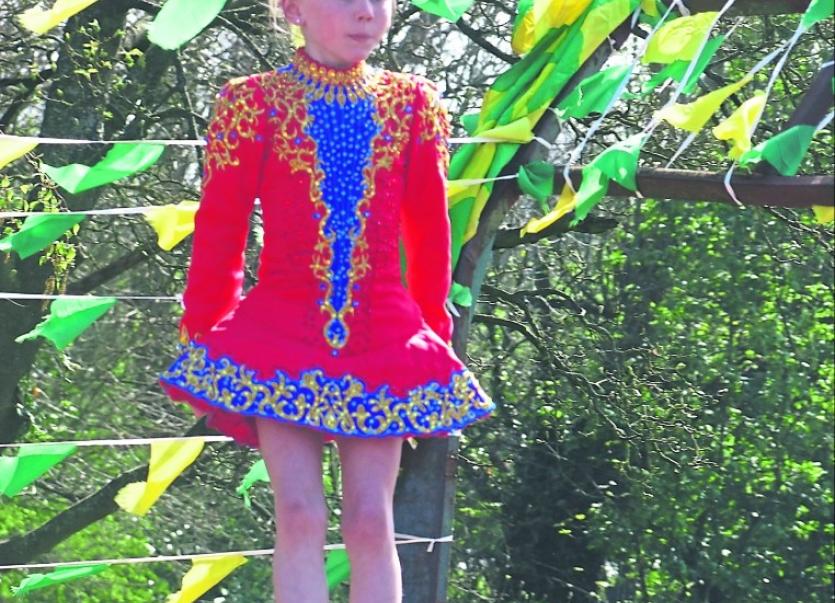 Croia Hickey dancing at the Pat Walsh Commemoration in Dunnamaggin

A sunny morning in Dunnamaggin saw hundreds gather to commemorate Captain Pat Walsh and his comrades who fought for Irish independence and gave the ultimate sacrifice.

Chairperson Canice Hogan told the crowd about the man behind the hero. A man who set up the Gaelic League in his community to preserve the Irish language and culture.

He founded the first Hurling Club in Dunnamaggin called the Glory Rovers and defied the British authorities ban on Irish games by continuing to organise and play matches.

Liam O’Sullivan from Kells, delivered a passionate speech reminding those gathered of the bravery of ordinary men and women who stood up and fought for Ireland’s freedom.
He outlined how Pat Walsh and Sean Quinn were injured and captured by Crown forces in Tullaroan and how Pat Walsh was transferred to Fermoy where he died.

The nature of his death was engraved by his parents on his tombstone so those who came after him would not forget how he died for Irish freedom.
His leg was amputated without anesthetic and infected with gangrene, Captain Pat Walsh lost his life.
Liam reminded us that the Ireland we know today would not be possible without men and women like Pat Walsh.
He finished his address by quoting President JF Kennedy ‘Say not what your country can do for you, but what you can do for your country’.

in all, a very impressive haul for a small community.
Ray Cody senior, who on February 10 carried the All Ireland Cup home to Dunnamaggin for the victorious team, laid a wreath at the base of Captain Pat Walsh’s statute to commemorate a man who loved his community and country and gave his life for our freedom.

The Doctor Hurley pipe band finished the commemoration by playing the National Anthem.
After the parade an Easter Egg Hunt Eggperience was held in the grounds of St Leonard’s NS where the children helped the Easter Bunny get back her eggs back from the Big Bad Wolf.
Music by John Joe O’Farrell and Richie Cahill in Townsends Pub from 6pm to 9pm finished a great day.