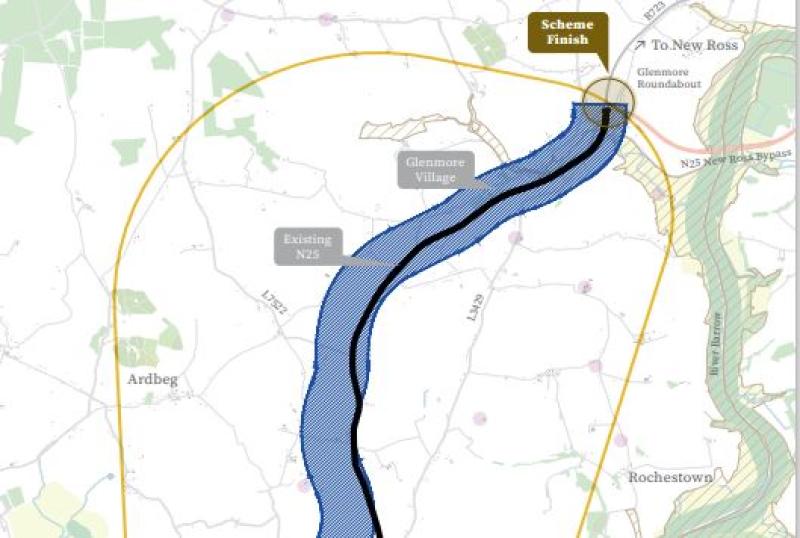 Preferred option for the N25, one of two Kilkenny road projects not allocated funding

South Kilkenny councillors have been hitting out at news confirmed today that no funding has been allocated from Government for the two major road projects in 2022.

Local council chairman Pat Dunphy described the news as not only a ‘huge blow’ to Kilkenny but to the South East region as a whole.

“We cannot let this go,” he said. “This must be contested. These projects are vital for business, jobs and growth.”

“Lives have been taken on existing roads in the region recently and to have these two hugely important projects left out of the funding allocations is hugely concerning,” she said.

Cllr Eamon Aylward sought answers as to why the South East region is ‘left on the bottom of the pile the whole time’.

“TDs from Kilkenny, Waterford and Tipperary need to open their mouths,” he said.

Cllr Ger Frisby also felt that the South East region had been neglected again, describing the region as the ‘poor relative’.

He then brought attention to the amount of money spent to get this to this point, describing it as a ‘waste’.

“Lives have been put on hold in the midst of all this. Young couples in the area not being able to settle down due to potential planning implications, farmers concerned about compulsory purchase orders, it’s far-reaching,” he said.

A significant portion of the route was set to run through south Kilkenny and Kilkenny County Council was the lead council on the project, working alongside Tipperary County Council.

The N25 (Waterford to Glenmore) project was planned to complete the link between the Waterford City Bypass and the New Ross Bypass.

The 9km dual carriageway aimed to improve local, regional and national accessibility and international connectivity via the Ports of Cork, Rosslare, Waterford and New Ross.

It was also seen as a vital future project to improve road safety in the area.