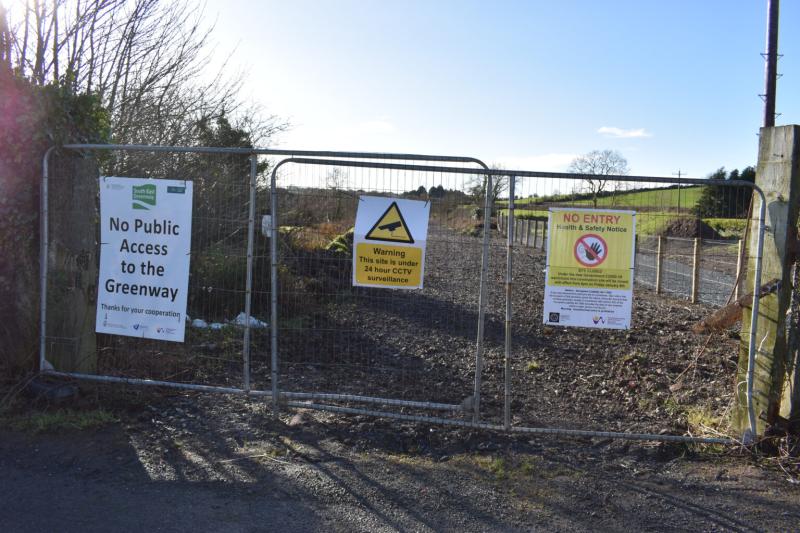 Some fencing and warnings along the South East Greenway warning the public not to access PICTURE: www.southeastgreenway.net

Security on the uncompleted South East greenway in the Ferrybank region has been ramped up significantly following recent vandalism and antisocial behaviour.

On Friday, July 1, a car managed to gain access to the greenway by driving down a laneway and through three fields filled with crops before bursting through a fence running along the greenway’s perimeter.

Cllr Doherty also drew attention to other acts of recent ‘unsavoury activity’ on the greenway in the region including vandalism and graffiti.

'SAD TO SEE'
Cllr Ger Frisby commented that the recent antisocial behaviour ‘is sad to see’.

“The car tore down about five or six sections of barriers along the greenway as it drove over the freshly laid tarmac,” he added, noting that he had received several calls in relation to the incident.

Cllr Pat Dunphy stated that the rising incident rate of antisocial behaviour on the greenway ‘should be seriously looked into by gardaí’.

The offending vehicle has subsequently been moved off of the greenway and investigations are ongoing.

He noted that local landowners have been engaged with since the incident regarding the accessibility of their lands as many don’t have gates.

He also confirmed that the contractor has acknowledged concerns and has increased security, particularly around Abbey Road and Belfield.

Cullen added that the contractor is actively looking into strengthening fencing along the greenway perimeter.

In the meantime, the Greenway Project Office continues to stress to the public that the greenway is a construction site at present and as such it is not safe to enter until it officially opens.

EXTENSION UPDATE
In other news, Kilkenny Leader Partnership and Trail Kilkenny are now working on a feasibility study and route selection report for a greenway link to Woodstock Estate, Inistioge.

Punch Consulting Engineers have been appointed to undertake this work.