Kelly's eye for goal gives Saints a share of the spoils 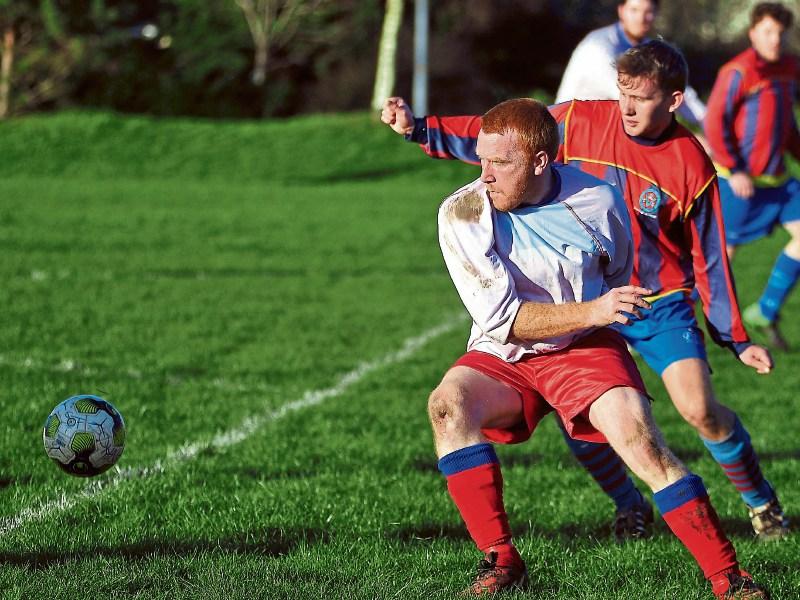 Better late than never! Steven Kelly was the toast of the city as his strike helped St John’s keep up their promotion charge.

City honour, and the bragging rights of Garringreen, were at stake as the Saints took on their rivals Ormonde Villa, but with 81 minutes on the clock it looked as if Villa were going to be the ones left smiling.

That all changed when Kelly latched on to a loose ball outside the box.

Charging forward, the midfielder moved into a pocket of space and, looking up, drilled a low drive that zipped across the surface and flew inside the right post.

Kelly’s goal was one of a number of entertaining moments in a Division Three clash where both sides were looking for hoping to get a win for different reasons. For John’s, three points would keep them on the tails of leaders Castlewarren Celtic. For Ormonde Villa, the win would see them go some way towards avenging the 7-1 opening day loss they suffered at the hands of the team they groundshare with.

They made the perfect start to their quest, taking just six minutes to go in front. Paul Denieffe was the provider, threading a through ball for David Barry to run on to.

Racing around his marker, Barry clipped the ball past outrushing goalkeeper Sunny Charles, his shot having enough weight to roll inside the left post.

John’s were stung by that goal, but almost posted a quick reply. Richie Shortall came up from the back for a corner and almost made the trip worthwhile with a powerful eighth minute header, but netminder John Rice made a superb save to beat the point-blank effort away.

John’s used the momentum from that chance to increase the pressure on their hosts – Jordan Conroy and Craig Murray led the charge along the wings – but the Villa defence resisted all their efforts.

That was until the 33rd minute, when patience paid off for John’s. Strike pair Jamie Glennon and Karl Jenkins teamed up to devastating effect, Glennon chipping a teasing cross from the left. The ball floated over Rice’s head, giving Jenkins a close range header from which he couldn’t miss.

Ormonde Villa shrugged off that equaliser – almost within a matter of minutes.

David Barry had a great chance to double his tally when he raced on to another great Paul Denieffe pass and skipped past Sunny Charles but his pace took him too far wide of the target; by the time he turned the ball back across goal, John’s had enough men back to clear their lines.

Barry did much better with his next effort, restoring Villa’s lead five minutes before the break. Once again Denieffe was heavily involved, moving play out to Craig Murray on the left. His low cross was a peach, the ball falling just right for the incoming Barry to sidefoot home from inside the six yard box.

Barry was in the thick of things in that first half and could have wrapped up his hat-trick before the break. His pace caused all sorts of problems, as he sprang the offside trap and sped on to Danny Lenihan’s telling pass, but he blasted over when faced with a one-on-one with Charles.

The second half saw Villa go on the defensive, shoring up the centre as they tried to hold on to what they had. They frustrated their rivals for long spells but were living dangerously – it took a superb tackle from Kieran Banville to deny marauding sub Trevor Kelly from breaking into the box on the hour mark.

With Kelly lending his support to the attack John’s were very much on the front foot for that last half hour, but the equaliser they craved wouldn’t come. Thomas Falsey went close – really close – when he found room to beat John Rice with a daisy-cutter of a drive, but the ball smacked off the bottom of the ’keeper’s right hand post.

That all changed when Steven Kelly surged forward to strike eight minutes from time after Villa failed to clear their lines.

The day almost ended on a real high for John’s, who went within a matter of inches of snatching an injury-time winner.

Richie Shortall gave the dice one last roll with a long free-kick. Jamie Glennon managed to knock it across the box, where Trevor Kelly connected with a stinging volley but his shot flashed over the bar, much to Villa’s relief.