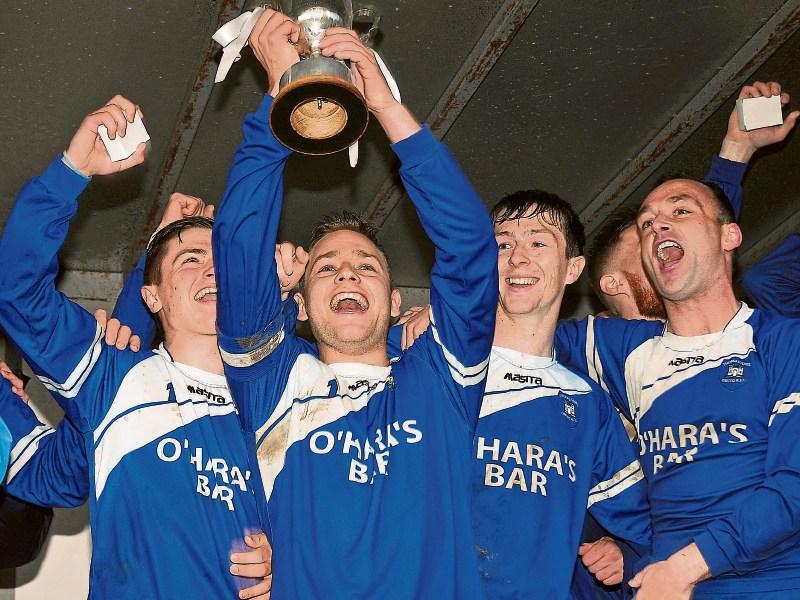 Four decades of emptiness were washed away as Thomastown United finally got their hands on the McCalmont Cup once again.

The boys in blue ended a 40-year wait for the most prestigious trophy in Kilkenny junior soccer, but not before going through a battle against reigning champions Evergreen A.

Saturday’s match in Derdimus had it all – and then some. The game, which may yet be described as the League’s answer to “The Thunder and Lightning Final” was played in the worst of weathers.

Thunder rumbled and lightning crackled as the teams came out for a game which had goals, chances and some talking points (more on those later).

In the end though, 110 minutes failed to find a winner. And even when penalties were called for, regulation kicks couldn’t separate the sides.

After three successful spot-kicks apiece the game looked to have turned Evergreen’s way when Nathan Sherry blasted his penalty over the bar. The advantage was short-lived – United netminder Paul Dunne made sure it was honours even when he dived to his left to stop the next kick from Damian Kelly.

It was the turn of the defenders to find a winner after that, but with both Derek Brennan and Niall Andrews converting their kicks the search for a champion continued. On to sudden death!

The game was just as thrilling from the off – not least because of the hail shower, thunder and lightning that whipped around Derdimus before kick-off. At that stage it seemed like both teams would fall victim to the conditions, but it took Thomastown just five minutes to light the evening up after Nathan Sherry was felled just outside the box.

C.J. Browne came up from the back to take the free-kick. Spotting something, he whipped a low shot to the left of the four-man wall. His gamble paid off, as the ball fizzed off the greasy pitch and zipped inside Packie Holden’s right hand post.

Thomastown were on a high after that goal – it was almost revenge for the early goal they had conceded to Evergreen in the Leinster Junior Cup semi-final a week earlier. They were intent on building on that lead and thought they had done just that a few minutes later.

Pressing forward, United thought they had made it 2-0 when Dessie Walsh stormed in to get his head to Mick O’Neill’s menacing 13th minute corner, but the cheers were cut short as the goal was ruled out for a push from the midfielder.

If Thomastown were angered at that decision, they were furious a few minutes later when Evergreen drew level. Racing on to Damian Kelly’s clipped pass down the right Daragh Walshe cut in from the wing and bore down on goal. With the United defence waiting for an offside call – it never came – they could only watch as Walshe unleashed a strong shot but Paul Dunne came to the rescue, sticking out his right foot to make the save.

The danger wasn’t over though, as Evergreen stayed in attack mode. Sean Barcoe chased down the loose ball and earned his reward, racing in to ram home the rebound.

The weather didn’t let up, but neither did the teams. Thomastown were stung by that goal but nearly made the perfect reply with 19 minutes on the clock.

This time the conditions almost lent themselves to the move. Caught up in a flooded part of the pitch Damian Kelly delayed releasing the ball and was caught when Nathan Sherry stole in to whip the ball away.

Driving into the box Sherry was forced wide by Holden, but still managed to slide the ball across the goalmouth. Mick O’Neill managed to poke his shot past Holden, but Oisin Corr was there to make a goal-line clearance.

The game was developing into an interesting tussle, not least in midfield, where United worked hard to nullify Evergreen’s main threats.

With the conditions staying poor chances were at a premium, but Evergreen were thankful to their player-manager for keeping them on level terms after the half hour.

Andy Kavanagh created the chance, staying strong to hold up C.J. Browne’s teasing diagonal ball on the edge of the box and tee it up for O’Neill. Taking a touch O’Neill sped into the box, getting off a shot that seemed destined to curl inside the far post.

Holden saw it late, but still got down smartly to flick the ball to safety.

The stalemate continued well into the second half, as the driving rain and hailstones made playing attractive football nigh on impossible for both sides.

The evening was turning into something of an endurance test – there was even an enforced break in order to brush excess water from the Thomastown penalty area – but when play sparked back into life the weather almost played a part in providing a goal for both sides.

Thomastown were first to have a go when sub Danny Monks beat the last defender and turned the ball across goal for Andy Kavanagh. He managed to control the delivery, but the ball got stuck in the wet, forcing him to miscue his 80th minute shot.

When play went down the other end, one flooded patch almost gave Damian Kelly an assist. Sprinting on to a ball which had stopped in a pool of water he let fly with a low drive, but Paul Dunne did well to hold the menacing effort.

Both sides continued to look for a winner as the game moved into extra-time, but that nagging feeling that penalties were looming couldn’t be shifted. Evergreen had a great chance in the first half of additional time, Daragh Walshe pouncing when a miscued clearance cannoned off Sean Barcoe and dropped at his feet, but C.J. Browne was there to make a vital block.

The real drama was saved for the latter stages, when Evergreen thought they had netted a winner.

For a few seconds it seemed as if they had done enough to win the Cup, but Evergreen’s cheers were cut short by the assistant’s flag, much to their disbelief.

The eventful evening continued right into the dying seconds of extra-time. Evergreen sub Robbie Quan almost snatched a last-gasp winner when he latched on to a half-cleared Kelly corner and got off a low drive. The ball took a ricochet or two as it squirmed through a sea of bodies, but Dunne managed to hold the shot.

After both missed their next kick the stalemate continued. Eamon Lyster and Dylan Whearty hit the net before subs Davy Prendergast and Brian Jordan did likewise.

After eight kicks apiece, the game moved to a battle of the goalkeepers. Paul Dunne went first, sidefooting a low shot beyond Packie Holden’s reach. He then went between the sticks and duly won the Cup, staying tall to beat Holden’s effort to safety and start celebrations that had been 40 years in the making.