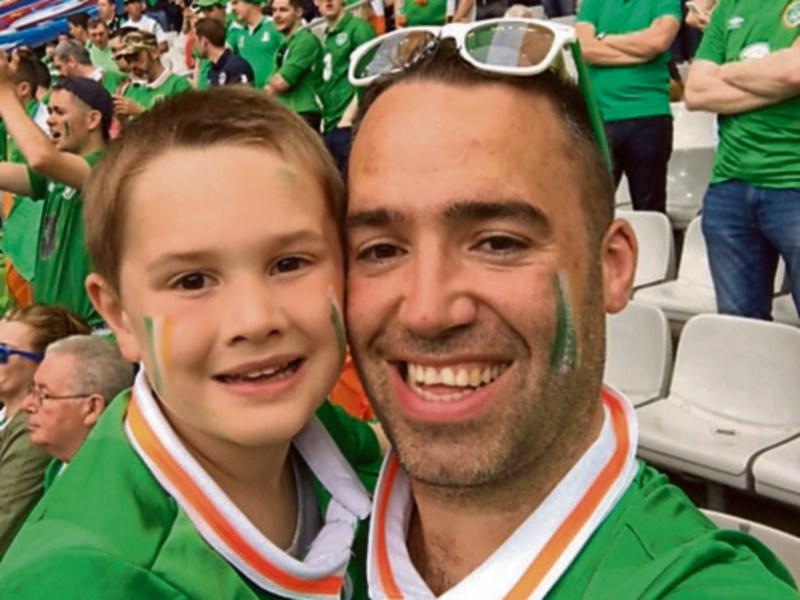 A singing and cheering sports fan with proud Kilkenny connections will be the toast of Europe this week.

He will be centre-stage when he receives a top award from the heads of European football.

The popularity of the Irish fans who travelled to France for Euro 2016 during the Summer will be recognised this evening (Thursday) when a group of supporters are presented with a special prize ahead of the World Cup clash with Georgia.

And right there in the mix will be Cian Prendergast.

The sports-mad supporter hit the headlines during the Summer when pictured on television belting out Amhran na bhFiann before the Republic of Ireland’s opening Group E match against Sweden.

Four-year-old Cian, a member of the London Ireland Supporters’ Club, was brought to the match in Paris by his father, Kilkennyman Martin.

The cameras zoomed in on the proud young supporter, and it didn’t take long for his popularity to soar.

“We sent videos from the match in Paris to family members back home in Ballyhale and Dunnamaggin,” Cian’s proud father Martin told the Kilkenny People. “My parents, Frank and Helen, live in Ballyhale so they were delighted to see the clips.”

But it didn’t stop there - Cian’s singing was seized upon by social media, with a number of sites highlighting how dedicated the young supporter was. He was also a hit with the BBC, who used him in their credits after the game.

Cian and Martin, who regularly travel from London to attend Ireland’s home games in Dublin, will be part of a team of fans who will accept the award from UEFA.

Following a review of the tournament, UEFA named the supporters of the Boys in Green as winners of the award for their outstanding contribution in making the Euros a success.

Awards will also be presented to supporters from Iceland, Wales and Northern Ireland for playing their part in making the Euros ‘a celebration of football’.

“Euro 2016 was a celebration of football thanks to the passion and dedication of the supporters,” said UEFA president Aleksander Ceferin.

“UEFA wanted to reward some of the groups of supporters that were particularly enthusiastic and passionate during the tournament.”

“Ireland supporters were an absolute credit to our country at Euro 2016,” said FAI CEO John Delaney. “The colour, atmosphere and support they brought was something we were immensely proud of, and the scenes inside each of the four match venues will live long in the memory.

“The supporters selected to receive the award are perfect ambassadors,” he added. “I look forward to the presentation ceremony.”

While Cian is looking forward to the match, he is hoping that accepting the award will earn him the chance to meet his hero - Southampton striker and Tipp native Shane Long!

PHOTO: Cheering on the Republic of Ireland at the European Championships in Paris were Cian Prendergast (4) and his father Martin. Cian has been selected to join a group of Irish supporters who will collect a special award from UEFA at Ireland’s World Cup qualifier against Georgia in Dublin.